UIS releases new data for SDG 9.5 on Research and Development 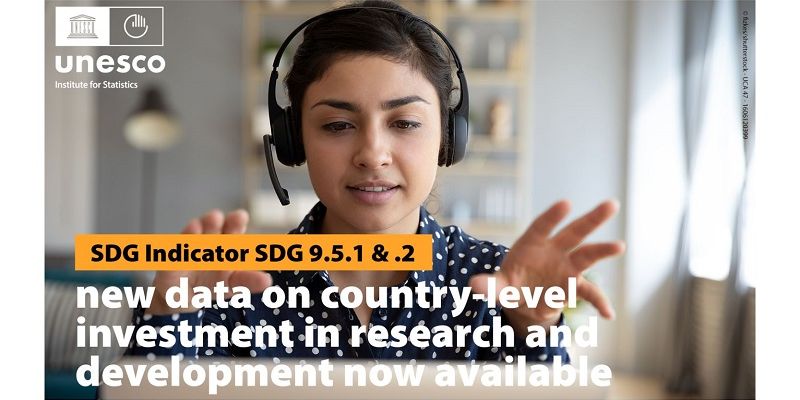 UIS releases new data for SDG 9.5 on Research and Development

Indicator 9.5.1: Research and development expenditure as a proportion of GDP

The fundamental importance of science, technology and innovation (STI) has never before been so apparent as during the global COVID-19 pandemic. Crucially also however, is the need to further harness the advances in STI to support the global recover from the pandemic, to tackle the tremendous socio-economic crisis triggered by it, and to fast-track progress towards sustainable development.

As part of the Sustainable Development Goals (SDGs) Agenda 2030, countries have pledged to “build resilient infrastructure, promote inclusive and sustainable industrialization and foster innovation” (SDG 9). The SDG Target 9.5 calls upon Member States to “enhance scientific research, upgrade the technological capabilities of industrial sectors in all countries, in particular developing countries, including, by 2030, encouraging innovation and substantially increasing the number of research and development workers per one million people and public and private research and development spending.”

The UNESCO Institute for Statistics (UIS), as the custodian agency, collects data and produces two key indicators to monitor progress towards the target:

The UIS has updated its global database on R&D with most recent country level data for the two global indicators. Data are available for 155 countries and territories for the period of 1996-2020.

Global investment in R&D has continued to grow despite the drawbacks in the global economic situation due to the pandemic. It represents an average annual growth rate of 4.7% over the last decade (2010-2020) when adjusted for inflation. 2020 saw a slowdown when the global R&D trend rose “only” by 3%.

Differences between the various regions of the world prevail, being visible within the Asia-Pacific region. Eastern Asia spent 2.67% of GDP on R&, accounting for the highest in the region and surpassing the world average by 1.5 times. South-Eastern Asia increased its R&D investments over the decade, currently at 1.02 of GDP. Sothern Asia saw a decline in its relatively low investment, while in Central Asia investment has neither increased nor accounts for a significant investment in relation to the GDP.

Researchers worldwide also continued to grow in numbers, representing an average annual growth rate of 3.9%, between 2010 and 2020 (from 1,022 to 1,342 per million inhabitants), being almost double in Eastern Asia and amounting to half in Central Asia (see Figure 1). Oceania (AUS and NZL only) account for almost 5000 researchers per million inhabitants.

Country level trends indicate that the investment in R&D as a proportion of GDP increased in many countries over the last decade (see Figure 2). Close to 30% of countries have increased their spending in R&D two-fold in relative terms as a proportion of GDP; with a further close to 20% of countries increasing it by at least 25%. These increases, however, are not necessarily due to increased investment in R&D during this period but because of substantial declines in GDPs, whereas the R&D investments in total amounts outpaced the GDP growth.

The new data are based on the UIS 2021 R&D Statistics Survey as well as statistics obtained from UIS partners, notably the Organisation for Economic Co-operation and Development (OECD), the Statistical Office of the European Union (Eurostat) and the Ibero-American Network of Science and Technology Indicators (RICYT). Data published on UIS Data Portal, however, are still from the June 2021 Data Release but this will be updated soonest at the time of writing. The data will also be featured in the United Nations Statistics Division’s (UNSD) SDG indicator database, as well as in numerous indices, databases and reports.

For the original article, see: