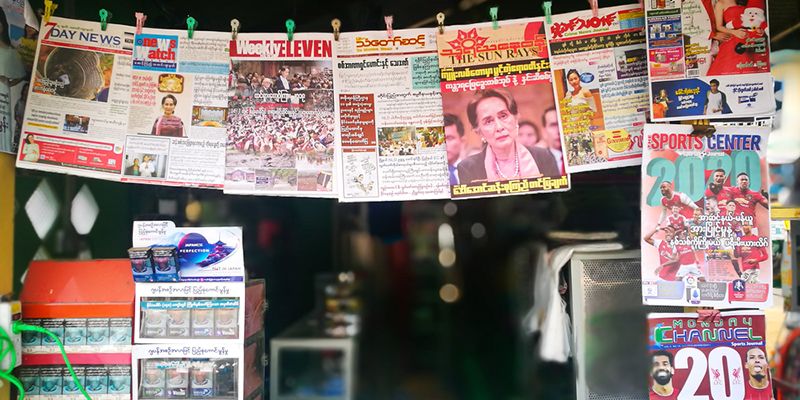 As Myanmar approaches another historic election, free and objective news coverage of the election period is essential for wider voter participation and a credible process. Journalists also expect a more transparent electoral process from the Union Election Commission (UEC).

Focusing on those issues, the UEC and the Myanmar Press Council (MPC) convened a two-day virtual dialogue 2020 General Election & the Role of the News Media on 19-20 September 2020 with UEC Chairperson U Hla Thein and MPC Chairperson U Ohn Kyaing leading the discussion. Also present were UEC and MPC officials and local and foreign journalists.

U Hla Thein said he recognized the important role of journalists and media for elections to be free, transparent and credible. He also gave updates on election preparations including public information initiatives in cooperation with the Ministry of Information.

U Ohn Kyaing reminded journalists to be balanced, fair and accurate in their election coverage for a free and credible election. MPC Joint Secretary U Myint Kyaw encouraged local journalists to write about the election system and processes, platforms of political parties, and results of the election. He challenged journalists “to create a space for open debate” including clarifying issues and concerns with the UEC, political parties and their candidates, and with the current government. MPC Secretary U Kyaw Swa Min reminded journalists to abide by the provisions of MPC Code of Conduct and Media Ethics and the updated guidelines for journalists during elections.

On 5 August 2020, the MPC in collaboration with UNESCO launched theElection Reporting Guidelines for Journalists, which defines the rules for covering elections. The guidelines updated the earlier 2015 version and built on the MPC’s Media Code of Conduct and Media Ethics.

During the initial two-day dialogue, UEC officials told journalists attending virtually that there would not be a postponement of the general election amid the COVID-19 pandemic. UEC official U Myint Naing said there were nearly 5 million first-time voters and the UEC with civil society organizations had already conducted voter education for new voters throughout the country.

According to U Myint Naing, 6,966 candidates are contesting seats in union, state and regional parliaments. The Commission is also coordinating with the Ministry of Health and Sports on proper public health standards to be enforced during the campaign period and on election day. Over 50,000 polling stations will be established, with each accommodating from 300 to 1,500 voters.

Local journalists from private and government media, foreign correspondents, and representatives from fact-checking organizations participated in the two-day dialogue. The UEC also committed to assist foreign journalists in election coverage.

An important consensus during the two-day dialogue was to convene similar dialogues every two weeks until the 8 November election for updates and to discuss new or emerging election coverage related issues. According to UNESCO National Project Officer Naing Naing Aye, UNESCO will continue to sponsor the dialogue series.

Working with the UEC and MPC is part of UNESCO’s continuing efforts to strengthen freedom of expression and to address the issues of hate speech and disinformation in Myanmar. UNESCO undertakes these initiatives with support from the “Multi-Donor Programme on Freedom of Expression and Safety of Journalists” and the project “Preventing hate speech and promoting peaceful society through Media and Information Literacy” under UN Peace Building Fund.