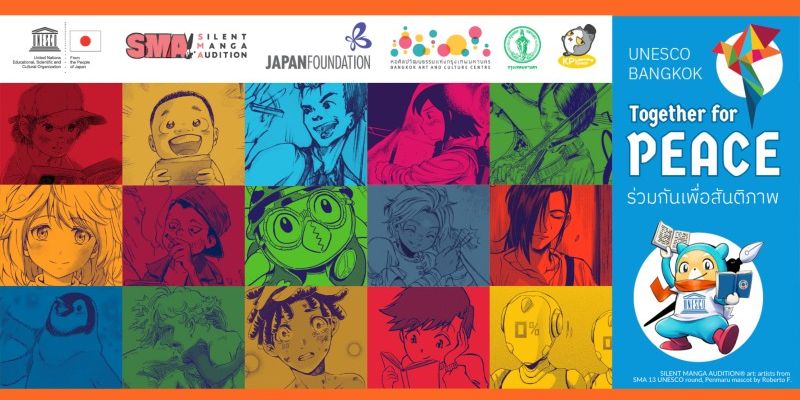 This Together for Peace Silent Manga Exhibition is a compilation of silent manga – manga stories told entirely through illustration without the use of dialogue and therefore can be enjoyed by anyone regardless of their background.

These works of art were selected from 274 entries submitted by artists in 117 countries worldwide to join SILENT MANGA AUDITION® Round 13 held under the theme Together for Peace, in collaboration with UNESCO Bangkok, the Asia and Pacific Regional Bureau for Education.

They showcase different reflections of peace as expressed by artists around the world while conforming to the Japanese manga style. We are delighted to share these inspiring silent manga works with you and would like to thank all manga artists for contributing to peace through their unique form of storytelling.

Let’s browse this exhibition together with Penmaru, the mascot of SILENT MANGA AUDITION® and our origami dove made of shapes in the 17 colours of the Sustainable Development Goals as the symbol of peace and how each goal comes together to build peace.

Peace is vital to all of us. This exhibition explores new ways to communicate this timely message to wider audience and the younger generations that will shape our future. We hope you will be inspired to contribute to building a more just and equitable peace for all.

How to Read Manga

Manga stories in this exhibition are meant to be read in Japanese style – from right to left and from top to bottom. Start by reading from the top right panel to the bottom left panel of the page or spread. You can train your eyes by following this diagram.

Invisible narrates the story of a young child who has a strong will to study but is denied access to education. Out-of-school children are deprived of their fundamental rights to education and are at the heart of UNESCO’s mission to achieve Education for All. Click here to read the manga.

Title:  In Your Shoes
Creators:  Priscilla Miranda and Lucas Marques

In Your Shoes is the story of a shy little child who has the chance to learn at a local school with the help of a caring teacher. This heart-warming manga reflects the importance of kindness and empathy to better understand the feelings of others. Click here to read the manga.

Mr Roux’s Math Class tells the story of an old man whose enthusiasm to learn never ages. He is surrounded by sweet children and supported by an encouraging teacher. Education leads to new opportunities and increases our quality of life. This manga beautifully illustrates that no one is too old to learn. Click here to read the manga.

Breaking free from a ‘wall’ visible only to the heart takes courage and determination. Chrysalis, with effective use of metaphor, narrates the story of a girl’s character development as she decides to reach out with a small gesture of peace at her school. Click here to read the manga.

A Melody of Peace illustrates the story of a bullying victim. Bullying is a problem that exists all over the world and can take different forms. This manga reflects UNESCO’s work to fight bullying and promote education for health and well-being of learners. Click here to read the manga.

A Wordless Apology addresses several issues in one single manga from bullying, poverty, and life as a refugee. The manga shows a boy’s character development after bullying a refugee classmate as he expresses his wordless apology with the help of his teacher and friends. Click here to read the manga.

The Lost Boy almost resembles a short film. It tells the story of a special connection between a foreign hostage and a child soldier in a conflict-affected environment. With powerful and dramatic scenes, this manga shows how the life of one young person can transform. Click here to read the manga.

Tabletop Warfare narrates the story of two conflicts that happen simultaneously in the kitchen. It tells us that while the scale of the conflicts can be different, all it takes to put an end to the tabletop warfare is a, literally, tiny help. Click here to read the manga.

Neither Bright Nor Dark is set in a fictional world that allows everyone to appreciate the story of a conflict and misunderstanding between two clans. This beautiful manga shows us how empathy and kindness can resolve problems and lead to reconciliation and peaceful coexistence in the end. Click here to read the manga.

My Weird Roommate is the story of two people with very different personalities and interests that share the same room. Through incidents and misunderstanding, can they learn to understand one another and live together in peace? Click here to read the manga.

Homeless dramatically narrates the story of how birds of different species can learn to coexist respectfully and peacefully despite conflicts in the beginning. While stressing the importance of kindness, the plot embodies UNESCO’s concepts of Global Citizenship and Learning to Live Together. Click here to read the manga.

Controversy of Sky uses metaphors to illustrate conflicts that happen both up in the sky and on the ground. Eventually, everyone realizes that conflicts cannot take them anywhere. Only the spirit of empathy and collaboration can move life forward. Click here to read the manga.

Legacy makes use of time travel to explore the history of South-East Asia and diversity in the port city of Malacca where different cultures coexist. This manga also narrates the acts of kindness that are imprinted in our memory and hold true over time. Click here to read the manga.

Title: Over the Barriers
Creator: AntiGA

Over the Barriers does just what the title says. This entry creatively makes use of manga borderlines to construct a very short manga story that will leave you impressed. It also touches upon the concepts of peace, war as well as the life of migrants and refugees. Click here to read the manga.

Prototype narrates the story of a robot that seeks to change its war-mongering peers into ‘peaceful mode’. The manga, which brilliantly illustrates the emotions of robots, also shares the idea that peace and friendship can exist even among artificial beings. Click here to read the manga.

More info about UNESCO Bangkok
This brochure provides key information about how UNESCO was born, how it functions and the programmes undertaken by its Bangkok Office for the Asia-Pacific region. Visit UNESCO Bangkok’s publication page to see and download learning resources.

SILENT MANGA AUDITION®︎’s website features details on the current competition, plus viewable manga entries from all previous rounds. The website also hosts a manga blog and vlog, featuring news, info and videos about the competition and manga making techniques and analyses.

Are there any particular silent manga entries you like in particular? After browsing through this online exhibition, do not forget to share via social media and invite friends to enjoy silent manga as well!