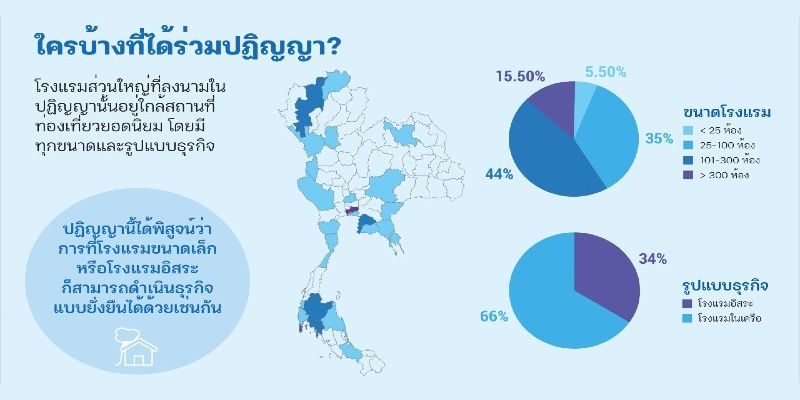 When signing the pledge, hotels were requested to indicate the actions they were currently implementing and the initiatives they were planning on carrying out or pursuing in the future.

Many hotels indicated they supported local communities by sponsoring local events (46% hotels at the time of signing the pledge and 58% pledged to do so in the future), even though larger hotels stood out in terms of donating to local communities. On the other hand, smaller hotels are more likely than others to bring local elements for decoration (43% were already doing it while 57% planned to do it in the future).

Some actions garnered a lower level of commitment presumably due to difficulties for hotels to commit to, such as the replacement of refreshing towels or using a keyless system.

As part of the pilot in Thailand, UNESCO commissioned a study to look further into what natural products and traditional handicrafts made in Thailand could potentially be upscaled to offer alternatives to single-used plastic products. The study identified a very wide range of natural materials that are commonly used for Thai households, such as bamboo, banana plant, palm leaves, coconut shells, etc. While acknowledging that the traditional wisdom and skills necessary to craft the products are becoming less prevalent, the study highlighted an increasing interest in and demand for natural products in many areas, including health, welfare, food, fashion, interior design and even construction. The study also showed that many hotels have been ordering locally produced items such as bamboo straws or hyacinth woven tote bags for their use. These partnerships between hotels and local producers does not only contribute to reducing single use plastics, but also improves local communities’ livelihood.

In promoting this initiative further, UNESCO hopes to address the environmental challenges posed by single-use plastic and to involve local communities in the development of sustainable tourism practices and know-how.