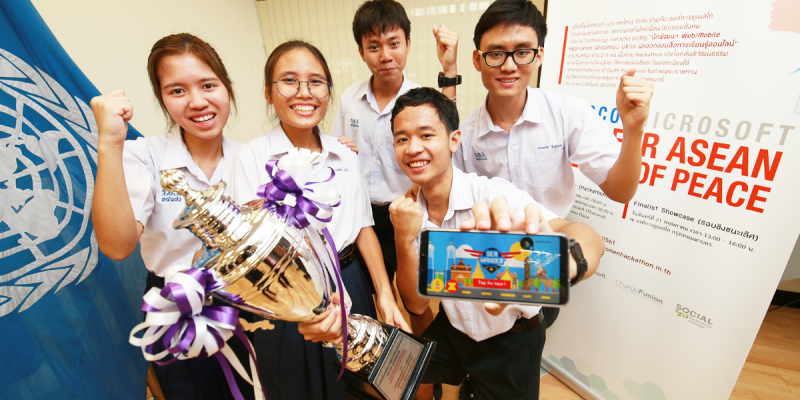 The land and cultures of South-East Asia transform over the eons – and you have a front-row seat in meeting the characters, uncovering artefacts and facing challenges in the countries that now make up ASEAN. That experience is offered by a new, student-designed app that is meant to change how we see the world, foster a better understanding between peoples of different cultures, and ‘build peace in the minds of men and women’.

Amid stiff competition, five students from Rayong Wittayakom School claimed the award granted by HRH Princess Maha Chakri Sirindhorn in the UNESCO-Microsoft Hack for ASEAN Culture of Peace. The event took place on 21 May to celebrate the World Day for Cultural Diversity for Dialogue and Development.

What distinguished their learning application ‘SEA Wander’ was not just technical skill, but also creativity. For example, during the course of the game, a character learns to plant Balinese rice under the guidance of the goddess Dewi Sri, but then the trickster is tasked with stealing the grain from under her watchful eye in order to bring the crop down from Heaven to feed humanity.

Behind the storyline is a surprisingly sophisticated pedagogy for recent secondary-school graduates. ‘For kids, they like storytelling. If you lecture them, they’re not going to understand, but if you make it visual, they will understand better,’ student Pechid Janthaka said. ‘It’s an animation design that has storytelling at the same time.’ That nuanced teaching approach also in part reflects why his team, the youngest of five groups of finalists, prevailed from an original field of 15 teams.

The applications all of these students presented are one piece of the puzzle of the ASEAN-wide Shared Histories curriculum that UNESCO has been introducing in schools across the region. Other contestants also showcased interesting uses of new technologies, such as Augmented Reality (AR) to bring villages and ancient settlements into 3D life on a mobile interface, and a trending gaming mode called Exergame (a combination of ‘exercise’ and ‘game’). They also emphasized gaming characteristics and roleplaying within historical narratives, for instance allowing students to assume the role of a sojourner through Southeast Asia who encounters various local communities along his travels. In another example, one team modelled economic and cultural exchanges, from the pre-Sukhothai era to the present day, to illustrate the linkages between different peoples in the region.

‘Congratulations to these young people who will have a very important role in the future,’ said Mr Shigeru Aoyagi, Director of UNESCO Bangkok. ‘These young people have made every possible effort to create many interesting, charming characters.’

The competition, jointly sponsored by Microsoft, UNESCO and Social Technology Institute, is part of a larger undertaking. On the one hand, based on a Microsoft #MakeWhatsNext initiative, the programme has provided strong encouragement to girls and young women to hone their coding and related STEM skills by developing their own applications. For the two young women on the winning team, enthusiasm and confidence for computer-related fields was brimming over after receiving their trophy. ‘I will study animation. In general, it’s my hobby and I love to do this,’ Napassorn Sangkiew said; ‘I want to study multimedia. I’m quite good at video editing and graphic design,’ Napat Nujern rejoined.

For UNESCO, the Hackathon provides another channel to disseminate the content of the teaching modules developed through the Shared Histories project funded by the Korean Funds-in-Trust. The competition encourages the use of multimedia and new technologies to make difficult content appealing to kids.

There is a reason that the students’ winning demonstration transcended a single national perspective and embraced multiple cultural and economic themes common to the region. The narratives that are being explored challenge traditional accounts that are often limited by nationalistic and sometimes hostile rhetoric more than historical fact. For Shared Histories, which has introduced teaching materials that are being piloted in schools across the ASEAN members, the shared understanding of history contributes to UNESCO’s fundamental values of quality education for all, fostering understanding and diversity, and building peace.

‘Even in ASEAN, we see quite a few conflicts and competition. To come up with something that shares a sense of living together is quite important,’ Mr Aoyagi said. ‘Through that we can understand each other’s differences, and commonalities, among ourselves. That is the starting point of building the defense of peace in our minds.’