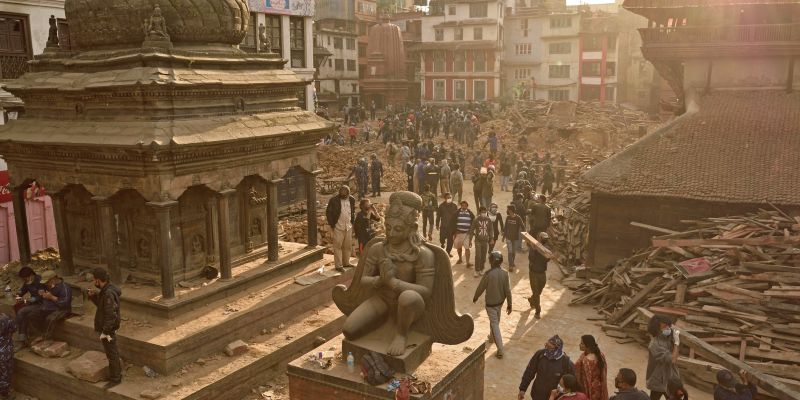 In the early morning of 24 April 2019, two back-to-back earthquakes of magnitudes 5.2 and 4.3 struck Central Nepal, including the capital city of Kathmandu, just one day before the fourth anniversary of the devastating 2015 Gorkha earthquake that claimed nearly 9,000 lives, left more than 22,000 injured and destroyed some 600,000 structures.

According to Nepal National Seismology Center, the two recent tremors were aftershocks of the 25 April 2015 quake, with a series of large and small aftershocks still occurring to this day. Although there has not been a report of damages yet, the tremors are a chilling reminder of the importance of disaster response and preparedness in the country.

Nepal is one of many disaster-prone countries of the Asia-Pacific region. It is also vulnerable to climate change and global warming. Although the country makes very small contributions to global carbon emissions, it is one of the most affected by climate change. Due to global warming, the Himalayan glaciers are melting and unleashing a series of tragedies, including avalanches, floods, landslides and drought.

While the country is recovering slowly from earthquakes, a high level Media Summit organized by the Asia-Pacific Broadcasting Union (ABU) and hosted by the Ministry of Communication and Information Technology of Nepal took place on 25-26 April 2019 in Kathmandu, with a focus on climate action and disaster preparedness. Under the theme Media Solutions for Sustainable Future: Saving Lives, Building Resilient Communities, the summit brought together nearly 300 broadcasters, political leaders, representatives of UN agencies, NGOs, scientists and journalists to discuss and develop joint practical media solutions for climate change adaptation and disaster preparedness.

At the summit, UNESCO also launched its new handbook Getting the Message Across: Reporting on Climate Change and Sustainable Development in Asia and the Pacific and organized a workshop to train journalists and journalism educators on climate change reporting.

“During the presidency of Fiji at COP23, there was a lot of hype among the media to cover climate change and climate action but then there was no follow up after that,” said Janice Singh, Director of the Human Resources of Fiji Broadcasting Corporation. “As one of the key players in climate change action, I believe media need to be proactive and play active role in informing the public about climate change preparedness as well as during and post-disaster.”

Customized for the Asia-Pacific region, the handbook offers a unique perspective for journalists in reporting climate change stories specific to the region, including the injustice wrought by climate change in vulnerable communities, especially involving women and girls and least-developed countries.

One of the main challenges that media face in reporting on climate change is the disconnection between the scientific community and the media. Often relevant knowledge is available but not being reported or disseminated to the public. Journalists need to communicate with scientists to understand the science of climate change before they can translate it into a simple, easy-to-understand language and disseminate reports to the public. This challenge highlights the need for capacity-building of media personnel on climate as well as the need for university curricula to include climate literacy.

A good example from the TV broadcaster ThaiPBS in reporting scientific information on climate change is to visualize information and simplify it into infographics so that the public can understand the message easily. The role of media in disseminating clear messaging in simple language is particularly vital during early warning periods as people’s lives depend on how fast and how clear they receive warnings.

Based on her experiences and lessons learned from Nepal on reporting on disaster, Nirjana Sharma, a Programme Coordinator with UNESCO Kathmandu, said journalists were also affected by disasters and victims, so the issue of journalist safety during disaster reporting was also important.

Climate change has particular gravity in the Nepalese context. “We will have to live with the mess that older generations have made. We will have to clean it up for them. That is not fair,” said Shigeru Aoyagi, Director of UNESCO Bangkok Regional Office for Education, quoting Greta Thunberg, the teenage Swedish climate activist, to remind participants about the impact of climate change on young generations.

The Conference of the Parties on climate change have met 24 times, yet world energy consumption is still growing and the CO2 emission are still growing. “If we don’t take action now, the result will fall on our next generation,” Mr Aoyagi said, highlighting the urgency to enhance climate literacy among the public, including through school curricula.

As the outcome document, the Kathmandu Media Action Plan was adopted by participants. The Action Plan acknowledges the 2017 UNESCO Declaration of Ethical Principles in Relation to Climate Change and reaffirms science as the basis for further actions on climate change, including media coverage, and recognizes the new UNESCO Handbook as an important guide for journalists.

By Kamonwan Petchot, Programme Assistant for Communications and Information at UNESCO Bangkok

* This article was also published in The Kathmandu Post