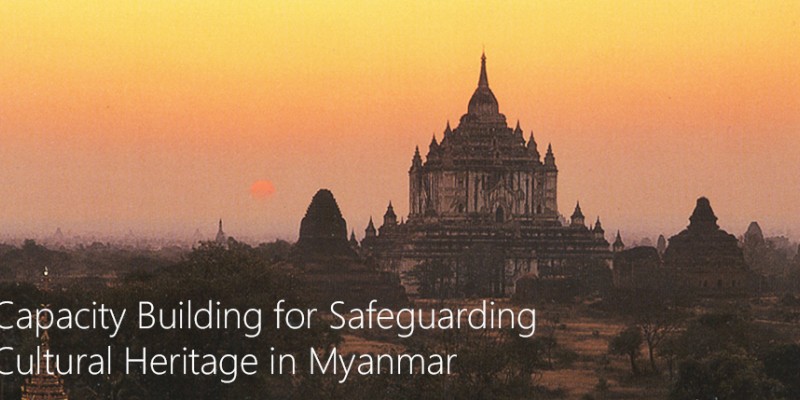 After a hiatus of more than a decade in culture sector cooperation, UNESCO Bangkok implemented the “Capacity Building for Safeguarding Cultural Heritage in Myanmar” project in 2012 in close collaboration with Myanmar’s Department of Archaeology, National Museum and Library (DoA).

To support Myanmar’s implementation of the World Heritage Convention, the project provided exposure to the most up-to-date international conservation practices. In the light of the country’s ultimate goal of nominating World Heritage properties, the project upgraded Myanmar’s capacity to conserve and manage cultural heritage sites.

The project responded to the immediate high priority needs of the DoA at two important cultural heritage sites on its Tentative List: the Pyu Ancient Cities and Bagan Archaeological Area and Monuments.

In order to raise technical capacity for World Heritage safeguarding, leading international organizations including the International Centre for the Study of Preservation and Restoration of Cultural Property (ICCROM) and the Lerici Foundation conducted world-class training in archaeological site conservation, World Heritage site management, and the conservation of mural paintings and stucco carvings.

The hands-on training at the Pyu Ancient Cities sites and at Bagan led to improved conservation standards through practical demonstration projects such as the consolidation of external carved stuccoes at a temple site in Bagan and the conservation of the highly significant Khin Ba Mound in Sri Ksetra.

With the participation of government officials from various sites on the national Tentative List, the capacity building efforts have benefited heritage sites from around the country.

At the institutional level, the project assisted the authorities in strengthening their management capacity for cultural heritage sites. For the first time in Myanmar, advanced technologies such as GIS were successfully put in place for the purpose of protecting cultural heritage. Key reference documents pertaining to World Heritage were translated into Myanmar language, to facilitate widespread diffusion and continued application among various national and local authorities.