Rural schools in Lao PDR give life to students’ dreams 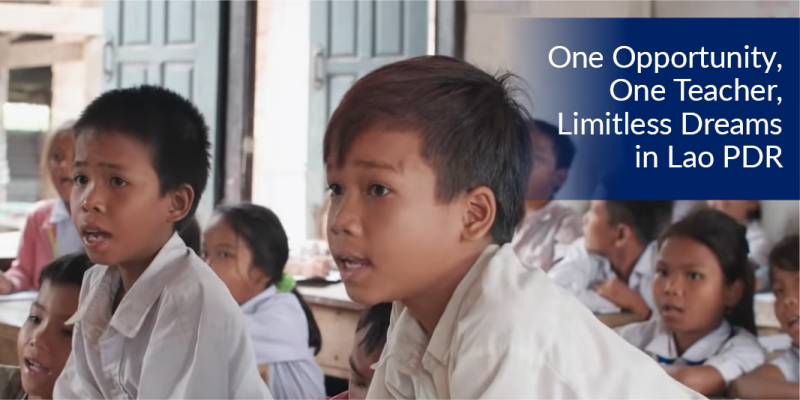 Rural schools in Lao PDR give life to students’ dreams

Phalanxay, Savannakhet: “When I grow up, I want to become a soldier to serve my country,” said 10-year-old Ton when talking about his dreams for the future. When he is not in school, Ton helps his family in the rice fields and with day-to-day chores such as tending to the cows and feeding the pigs. He lives in a one-room house along with his five siblings and he is the only one in the family who has had the opportunity to go to school.

The fundamental human right of access to education is still not available for many children like Ton, with lifelong consequences. Ensuring quality education for all children, including those from low-income families and in rural areas, is fundamental to achieving development goals for countries across the Asia-Pacific. Education is compulsory and free through to the fifth grade in Lao PDR, but access to quality education in the country is still limited given capacity issues. There are shortages of teachers in rural areas and geography remains a considerable challenge for students in more remote villages.

“As I have taught in the past, there were a group of students who did not have the opportunity to go to school and those who have dropped out from school,” said Mr Somjai Ladsomphu, a teacher at Baan Kokbok (Kokbok Village) in Savannakhet province. “The children were living in small villages, but the formal school was located in the big village.” Prior to the building of the new school in Kokbok, the distance to the schoolhouse was a serious barrier for students who were already helping their families to make ends meet.

Especially in the northern and western areas, the country is very ethnically diverse. According to the national representative household survey, the Lao Expenditure Consumption Survey 2012/2013 (LECS V), children who are likely to be out of school are in geographically concentrated areas in a few provinces. Savannakhet has the highest number of out-of-school children.

About 65,377 primary-school aged children are not in school, many of whom are living in remote areas that do not have schools or are from poor families who are excluded from education, according to 2018 data from the UNESCO Institute of Statistics. In cooperation with the Department of Non-Formal Education of the Ministry of Education and Sports (MoES), Lao PDR, Educate A Child, and UNESCO Bangkok has helped to implement the Primary Education Equivalency Programme, which focuses on improving access to education for disadvantaged students and strengthening the capacities of teachers.

The initiative has been able to scale up flexible learning strategies covering 15 provinces and more than 79 districts. Over 14,000 out-of-school children were enrolled and more than 100 teachers trained from the academic years 2016 to 2019.

Mr Somjai acknowledges that it can be challenging teaching a class that has students from multiple grades attending at the same time, so that he has to move back and forth among groups of students teaching grade-appropriate lessons.

“There are currently not enough teachers, therefore our role is to recruit more,” said Mr Phonexay Vilasack, Head of the Phalanxay District Education and Sport Bureau. “This is by recruiting teachers from both formal school and non-formal school systems to volunteer.” A major component of the programme is teacher training, which is focused on a more child-centred pedagogy and multi-grade teaching practices.

While the non-formal education takes place in mixed classrooms, often after regular school has finished, the goals are to educate students to read and write at standards matching those of the formal school system, allowing school-age children to transition to the formal system. There are ongoing efforts to enroll more out-of-school children, prevent student dropouts and continue teacher training.

Lao PDR is committed to ensuring that all citizens graduate at least upper secondary school by the year 2030, according to His Excellency Dr Khamphay Sisavanh, Vice-Minister of the Ministry of Education Sport. “The Government of Lao PDR is currently implementing the project that will help raise the quality of education for those living in remote or hard-to-reach areas,” Dr Khamphay said.

“The Department of Non-Formal Education plays an important role in identifying children talks that have dropped out from school or have never had a chance to attend,” he said. Lao PDR will continue to move forward towards universal access to primary education, with the current government implementing the Equivalency Programme using its own funding.

For each of the students who have this new opportunity, their lives are potentially transformed. For Nam, a classmate of Ton’s in Kokbok Village, her goal is to become both a teacher and a doctor so that she can look after her parents in the future.

“It’s important as a teacher to shape their mind to become a good person and speak well,” Mr Somjai said. “Students who have dreams told me that only the teacher supports them to achieve their dreams, and encourage them to study and to become smarter.”

By Wasinee Noppakunthong, a Programme Assistant in the Non-Formal Education and Literacy section at UNESCO Bangkok.

* This article was first published in AEC News Today