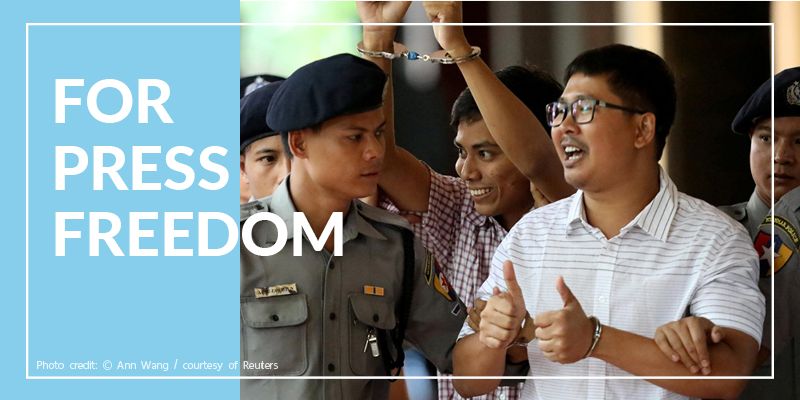 Both laureates are serving seven-year prison sentences. At the time of their arrest in Yangon on 12 December 2017, they were working for the Reuters news agency, reporting on alleged human rights violations in Myanmar’s state of Rakhine.

“Wa Lone and Kyaw Soe Oo symbolize their country’s emergence after decades of isolation,” said Wojciech Tochman, President of the Jury. “Both from modest, provincial backgrounds, they worked hard to pursue careers that would have been impossible in the junta era into which they were born. They were arrested because they documented a taboo topic regarding crimes committed against Rohingyas. The final choice of Wa Lone and Kyaw Soe Oo pays a tribute to their courage, resistance and commitment to freedom of expression,” he added.

The Prize recognizes outstanding contributions to the defence or promotion of press freedom especially in the face of danger. It is named after Guillermo Cano Isaza, the Colombian journalist who was assassinated in front of the offices of his newspaper El Espectador in Bogotá, Colombia, on 17 December 1986.

The $25,000 Prize is funded by the Guillermo Cano Isaza Foundation (Colombia), the Helsingin Sanomat Foundation (Finland), and The Namibia Media Trust.