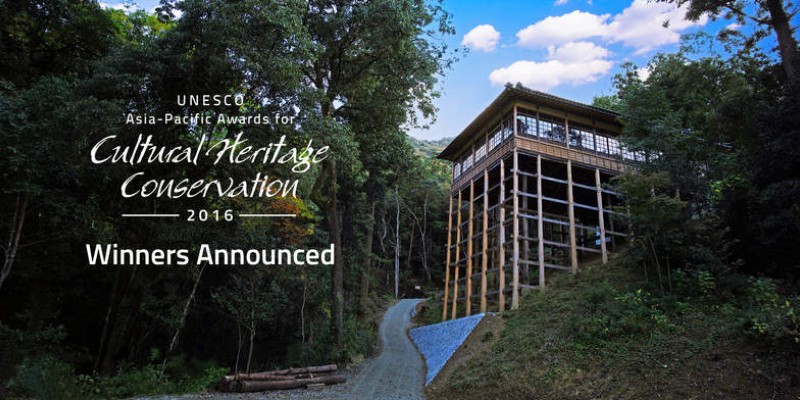 BANGKOK, 1 September 2016 — The Restoration of the Sanro-Den Hall at Sukunahikona Shrine in Ozu City, Ehime Prefecture, has received the Award of Excellence in this year’s UNESCO Asia-Pacific Awards for Cultural Heritage Conservation.

A total of 13 winning projects from six countries – Australia, China, India, Iran, Japan and Pakistan – have been recognized in this year’s Heritage Awards. A panel of international conservation experts met in Bangkok to review the 40 Heritage Awards entries, including 34 in the Conservation category and six for New Design.

Duong Bich Hanh, Chair of the Jury and Chief of UNESCO Bangkok’s Culture Unit, said she was pleased to see the Heritage Awards encourage good conservation practices in the region. “Jury members were delighted with the quality of this year’s entries to the Heritage Awards,” Ms. Hanh said. “This showed increased knowledge and higher standards in conservation work across Asia-Pacific.”.

This year’s Award of Excellence winner, the Sanro-Den Hall, a prayer hall at Sukunahikona Shrine in Ozu City, Ehime Prefecture, is an exceptional example of community stewardship enlisted in the conservation of a heritage site of unique architectural and cultural value. The project epitomizes the efficacy of grass-roots advocacy, coupled with traditional building practices, in extending the life of distinctive 20th-century Kakezukuri structure, successfully returning it to a central place in the cultural life of the local community.

Jury members also agreed to revise the regulations regarding how old a site must be to be eligible for the awards, reflecting a growing awareness in the conservation field of the importance of recognizing cultural heritage that is less than 50 years old, which is in growing danger. The revised regulations will be available via the UNESCO Bangkok website at the end of this year, and will be applied to entries submitted for next year’s awards.

Other Awardees included: Award of Distinction:

The UNESCO Asia-Pacific Awards for Cultural Heritage Conservation programme recognizes the efforts of private individuals and organizations that have successfully restored and  conserved structures and buildings of heritage value in the region. By recognizing private efforts to restore and adapt historic properties the awards aim to encourage other property owners to undertake conservation projects within their communities, either independently or by seeking public-private partnerships.

The winners were selected on the basis of the extent to which the projects reflected a clear understanding and application of various criteria, such as the articulation of the spirit of place, technical achievement, appropriate use or adaption, and the project’s contribution to the surrounding environment as well as the local community’s cultural and historical continuity.

Eligible projects must have been completed within the past 10 years. Buildings with a new use must have also been in viable use for at least one year from the date of the awards announcement.

Further  information  about  the  UNESCO  Asia-Pacific  Heritage  Awards  for  Cultural  Heritage Conservation and this year’s winning entries can be found at:  www.unescobkk.org/culture/heritage/awards/

The Call for Entries for the 2017 UNESCO Heritage Awards shall be made at the end of 2016, and further details will be available on the awards website.