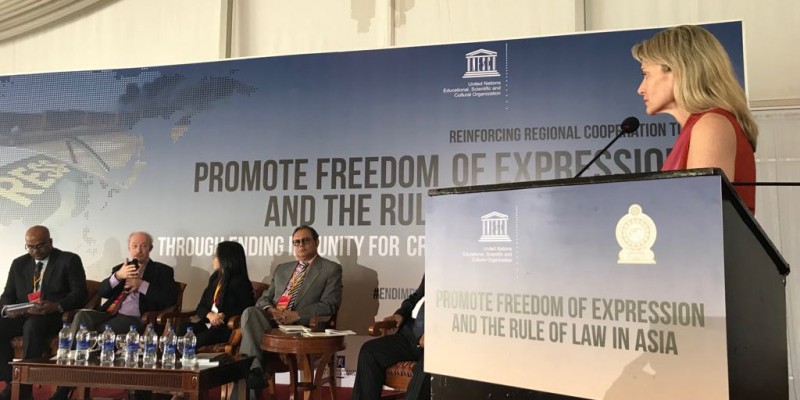 Around 170 national, regional and international stakeholders from 23 countries participated in the one-day event, the first meeting of its kind in the South Asian country and the main event of the commemoration of the International Day to End Impunity for Crimes against Journalists (IDEI) 2017.

Between 2006 and 2016, 107 journalists have been killed in Asia according to UNESCO statistics, but only 7% of these cases have been judicially resolved.

The seminar was opened by Hon. Ranil Wickremesinghe, Prime Minister of Sri Lanka. "The media is the first line of defence against those who seek to undermine our democracy," he said. "As a promise to the media, we will investigate and bring to justice those that have ended the lives of our journalists, and send a very clear message that this government will protect the journalists by all measures at hand”.

Commenting on the event, Sri Lankan journalist Sonali Samarasinghe said: “The rule of law is the fulcrum upon which a fair and just society rests and it must work in tandem with the independence of the judiciary, separation of powers and freedom of expression if we are to tread a path of peace and accountability.”

Ms Samarsiinghe, the widow of Sri Lankan journalist Lasantha Wickrematung, who received UNESCO Guillermo Cano World Press Freedom Prize after he was killed in 2009, added: “The state has a duty to guarantee that the violations we have experienced as a nation do not recur and a special duty to reform those institutions that have proven incapable of preventing the abuses”.

The event included discussion on the establishment of national protection mechanisms to protect journalists and prosecute the perpetrators of attacks against them. A second focus was on developing regional cooperation through National Human Rights Commissions and civil society, as well as developing the capacity of the judiciary and law enforcement agencies in Asia on these issues.

A specific session was also organised on the situation in Sri Lanka, titled: “Review of challenges and achievements”, which examined the state of freedom of expression and investigations on killed journalists in the country.

Berger noted that the importance of journalist safety and ending impunity are recognised in Sustainable Development Goal 16 on “Peace, Justice and Strong Institutions”.

“This goal calls for the promotion of the rule of law and equal access to justice for all, as well as ensuring public access to information and protecting fundamental freedoms,” he said.

The regional seminar in Colombo was organized under the framework of the commemoration of IDEI 2017 with the support of the Open Society Foundation, with contributions from Norway, Internews, IFEX, International Media Support, Global Voices and the International Federation of Journalists.

UNESCO is the UN agency with a mandate to defend freedom of expression and press freedom. Since 2012, it has spearheaded the UN Plan of Action on the Safety of Journalists and the Issue of Impunity, a systematic and UN-wide Plan to work toward a free and safe environment for journalists and media workers, with a view to strengthen peace, democracy and sustainable development worldwide, in both conflict and non-conflict situations.