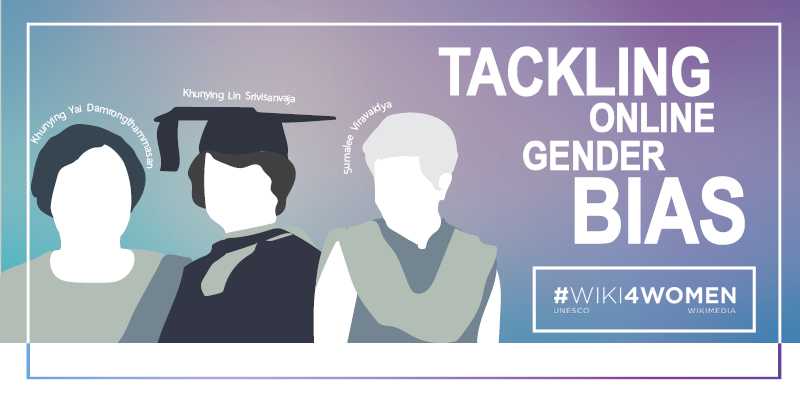 Khunying Srivisanvaja was the first Thai woman to receive a medical degree and practise medicine in Thailand. Sumalee Viravaidya was a journalist who ensured a gender equality clause was added to the Thai constitution. Khunying Yai Damrongthammasan was a devout dhamma practitioner who wrote a widely celebrated Buddhist text. What do all of these women have in common? Relative anonymity. They do not have a Wikipedia page or the online presence commonly associated with their male peers. And yet their accomplishments have had lasting impacts on Thai society.

Upon her return from studying abroad in 1924, Khunying Srivisanvaja, née Margaret Lin Xavier, also familiarly known as Dr Lin, became an obstetrician, working for the Thai Red Cross, Chulalongkorn Hospital and the Ministry of Public Health medical facility in Bang Rak district, where she mainly treated sexually transmitted diseases. She also established a medical clinic with her half-sister Chan Xavier, who worked as the clinic’s pharmacist.

Dr Lin was clearly a woman ahead of her time. According to the book Naree Phu Mee Khun (roughly translated as “Virtuous Women”) published by the National Identity Office in 1992, she cared for patients of all social classes, not only the Thai aristocracy. At the Bang Rak facility, many of her patients were poor sex workers, whom she treated free of charge. Even when she was breastfeeding, Dr Lin still continued to work, going home to breastfeed in the middle of the work day and returning to work in the afternoon. She opted to breastfeed her children herself, although most women of her status during that time would have employed a wet nurse.

Sumalee Viravaidya was a Thai journalist who wrote for The Nation and The Bangkok Post in the 1970s. She was the only woman on the committee drafting the constitution after the 14 October 1973 student uprising and subsequent resignation of the military government. According to a New York Times profile in 1973, she initially wanted the word “sex” to be added to a sentence stipulating “Every person, regardless of race or religion, is equally protected by this Constitution.” Her request was overwhelmingly overruled.

Sumalee took issue with laws that relegated every woman to be legally inferior to her husband upon marriage. At that time, there were many things a Thai woman could not do – get a job, obtain a passport, buy property – without her husband’s consent. In the end, the committee reached a compromise, adding a clause that stated: “Marriage shall be based on the equality of the partners, both legally and morally.”

Born in 1886, Khunying Yai was taught to read and write, unlike most Thai women at the time. She studied with monks and became well learned in Buddhist doctrine. Upon the death of her husband, she spent the rest of her life meditating and studying scripture at a monastery in southern Thailand until her death in 1944. Evidence strongly suggests that she was the author of the well-known Buddhist text Thammanuthamma-patipatti.

These are all historically significant contributions. Unfortunately, these women, like so many others, are not widely known or recognised simply because of their gender. It’s also interesting to note that they are often only mentioned alongside – or overlooked in favour of – men.

Some sources in Thai, including Naree Phu Mee Khun, dedicate some, if not most, of the text to how Dr Lin was a most eligible bachelorette who was the object of many men’s affection, before being set up with and marrying Phraya Srivisanvaja. The name Khunying Srivisanvaja, as she was most likely known in aristocratic social circles, was only bestowed upon her as the wife of a nobleman.

Sumalee is often referred to as the sister of the more famous Mechai Viravaidya, the former politician and family planning activist who became synonymous with condom use in the 1970s and is the founder of the longstanding charity and restaurant Cabbages and Condoms. But Sumalee was an activist in her own right, fighting for gender equality in Thai law drafted and dominated by men. She was also an avid philanthropist, donating to causes such as the Camillian Social Center, a facility in Rayong providing assistance for women and children living with HIV/Aids.

In the case of Khunying Yai, academic research conducted in 2013 by Dr Martin Seeger, an associate professor of Thai studies at the University of Leeds, concluded she was the author of the prominent Buddhist treatise, not the high-profile monk Luang Pu Mun Bhuridatta, to whom it had often been credited to since 1949. According to Seeger, it is unlikely that Khunying Yai had even met the esteemed monastic. She never claimed authorship of the work, for reasons that remain unknown.

A quick Google search easily yields information on prominent men spanning every period of history, but their female peers have far less of a presence in the digital sphere. Phraya Srivisanvaja, Mechai Viravaidya and Luang Pu Mun all have dedicated Wikipedia pages in Thai, English or both. Women’s achievements remain unrecognised – and in some cases suppressed.

On the other hand, you may wonder, why does it matter? What is so important about having a Wikipedia page?

A closer look is revealing. Only 17 per cent of biographies on Wikipedia feature women. Only 10 per cent of people who create and edit content on Wikipedia are women. It reflects how women’s accomplishments have been dismissed, because, let’s face it, most of history has historically been written by men.

On this year’s International Women’s Day earlier this month, the #Wiki4Women project was initiated by UNESCO in cities all over the world, including Cairo, Lima, Paris, New Delhi, Reykjavik and Bangkok. At the event hosted at the UNESCO Bangkok Office, like-minded digital citizens gathered to edit and create content on Wikipedia to highlight more historical female figures in the areas of education, science and culture. The “edit-a-thon” was carried out with guidance from a team of volunteers from Wikimedia Thailand.

It was a cause that struck a personal chord with participants. “Nowadays, we can see many talented women in Thailand and around the world, but there are not many events to give them an opportunity to showcase their works, so I responded to #Wiki4Women straight away when I saw it,” said Nathanik Klaklangsmorn, Editorial Liaison Officer at Associated Press. “More profiles of talented women on both digital media and the real world will showcase and could eventually inspire current and new generations to follow in their footsteps.”

Chadatan Osatis, a lecturer from the College of Population Studies, Chulalongkorn University, suggested that women’s stories have been historically hidden because of how hard it has been to break the patriarchal status quo. “In society, especially in Thai norms, the stereotype of ‘good’ women is fixed,” she said. “It is difficult for women in each period to reveal their opinions or their real desires for change. To showcase more women on Wikipedia is a great channel to reveal all their contributions both in the past, the present and the coming future.”

The gender gap is one of the enduring issues that Wikipedia is facing. “It’s all about gender equality,” said Athikhun Suwannakhan, one of the main coordinators from the Wikimedians in Thailand User Group. “It is clear that women are represented less in comparison with men, and it is true for both the real world and digital spaces. The gender gap on Wikipedia contributes to the systemic bias in Wikipedia content.”

“This event was a good starting point to turn it around. In the long run, we would like to see more women getting involved in our movement,” he said. “At the end, it is not applied only to women, but also to other underrepresented groups such as people of colour, LGBT and ethnic minorities.”

Movements like #Wiki4Women are bringing more stories of notable women to light and may allow people to become more aware of the great contributions women have given to help shape our common history and society. But it will be better still when an accomplished woman can be included and featured prominently, not as tokenism or an afterthought or solely in relation to her male counterparts, but as a simple norm. To be accurate, history needs more of her story.

By Chariya Chiumkanokchai, a Programme Assistant for Education for Sustainable Development and Global Citizenship at UNESCO Bangkok.