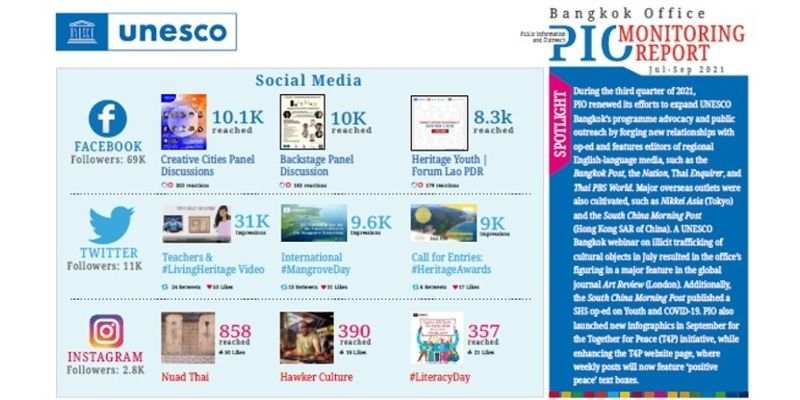 During the third quarter of 2021, PIO renewed its efforts to expand UNESCO Bangkok’s programme advocacy and public outreach by forging new relationships with op-ed and features editors of regional English-language media, such as the Bangkok Post, the Nation, Thai Enquirer, and Thai PBS World. Major overseas outlets were also cultivated, such as Nikkei Asia (Tokyo) and the South China Morning Post (Hong Kong SAR of China). A UNESCO Bangkok webinar on illicit trafficking of cultural objects in July resulted in the office’s figuring in a major feature in the global journal Art Review (London). Additionally, the South China Morning Post published a SHS op-ed on Youth and COVID-19. PIO also launched new infographics in September for the Together for Peace (T4P) initiative, while enhancing the T4P website page, where weekly posts will now feature ‘positive peace’ text boxes. 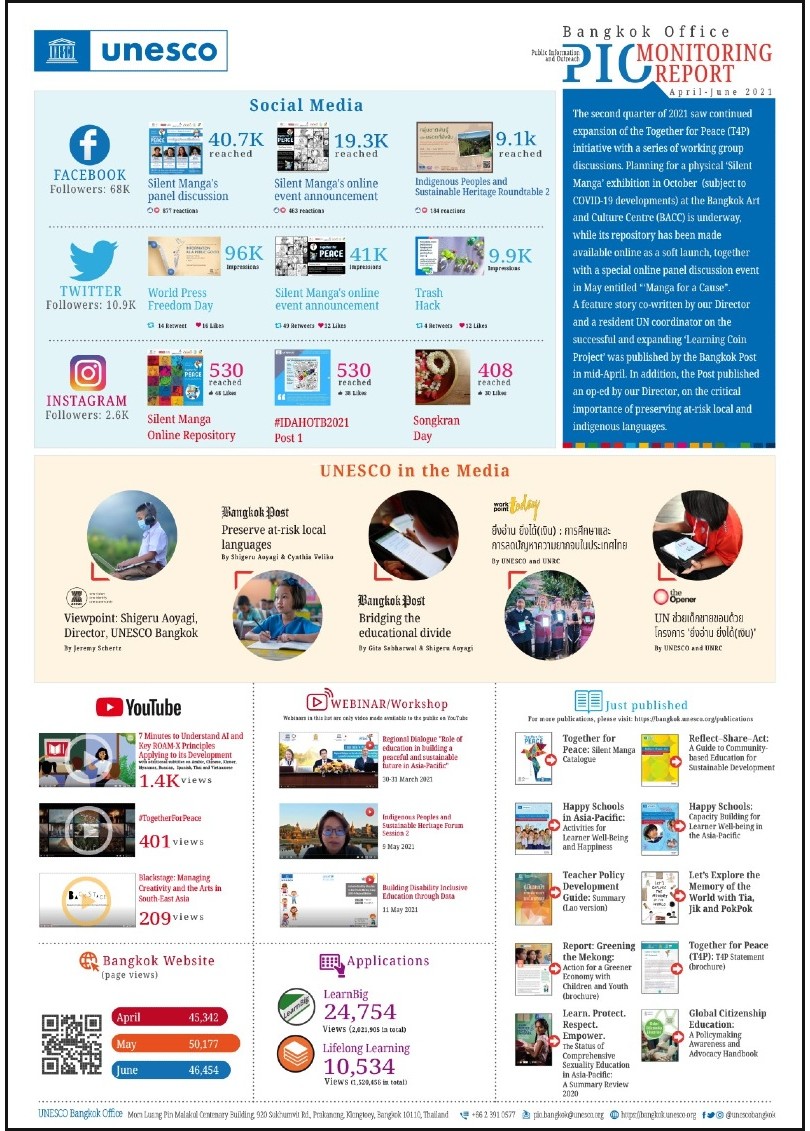 The second quarter of 2021 saw continued expansion of the Together for Peace (T4P) initiative with a series of working group discussions. Planning for a physical ‘Silent Manga’ exhibition in October (subject to COVID-19 developments) at the Bangkok Art and Culture Centre (BACC) is underway, while its repository has been made available online as a soft launch, together with a special online panel discussion event in May entitled “‘Manga for a Cause”. A feature story co-written by our Director and a resident UN coordinator on the successful and expanding ‘Learning Coin Project’ was published by the Bangkok Post in mid-April. In addition, the Post published an op-ed by our Director, on the critical importance of preserving at-risk local and indigenous languages. At the end of the first quarter 2021, Public Information and Outreach worked closely with all programme units to help to launch the Together for Peace Regional Meeting, convening education policymakers and stakeholders from across the Asia-Pacific. Communications outreach and advocacy included articles in policy and science news platforms ahead of the event, social media coverage, multimedia presentations, and editorial support for the event and to pave the way forward for the initiative. Over the course of the quarter, PIO also continued to amplify national and regional initiatives in traditional and digital media, for example organizing coordinated advocacy for International Mother Language Day, International Women’s Day and World Water Day. As a member of the UN Communications Team, PIO contributed to UN Thailand joint efforts with an ongoing focus on COVID-19 resilience. 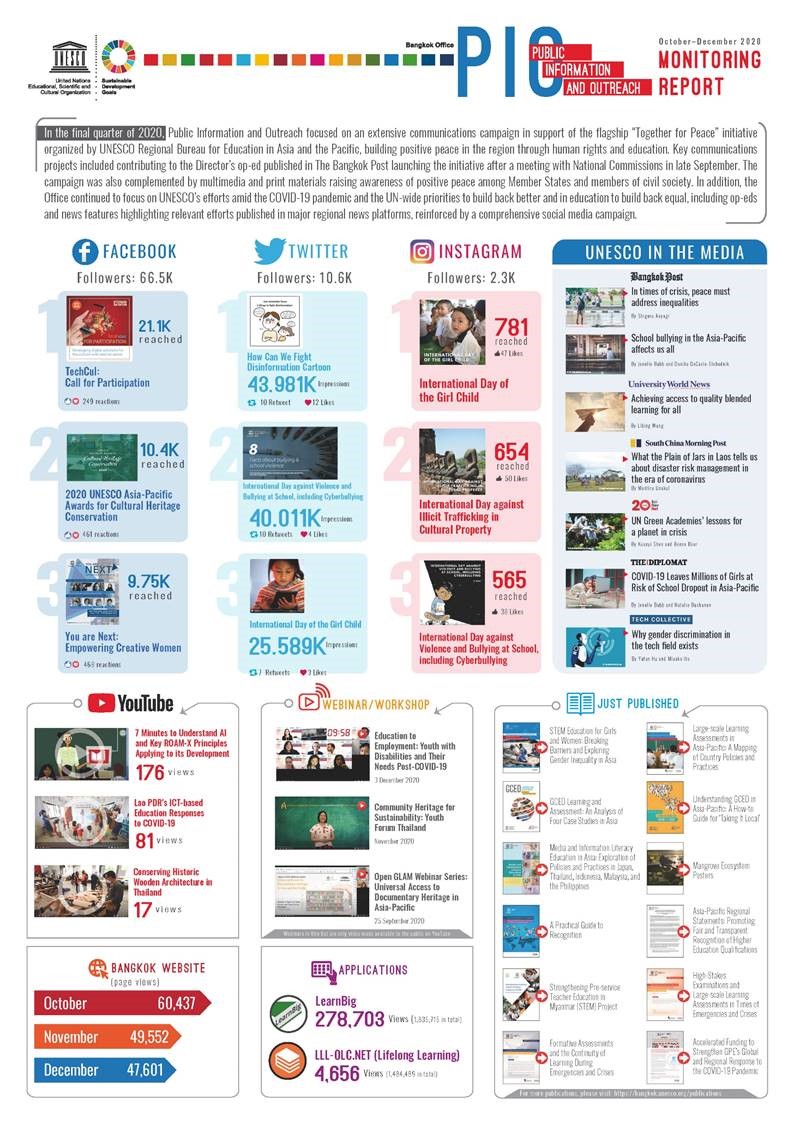 In the final quarter of 2020, Public Information and Outreach focused on an extensive communications campaign in support of the flagship “Together for Peace” initiative organized by UNESCO Regional Bureau for Education in Asia and the Pacific, building positive peace in the region through human rights and education. Key communications projects included contributing to the Director’s op-ed published in The Bangkok Post launching the initiative after a meeting with National Commissions in late September. The campaign was also complemented by multimedia and print materials raising awareness of positive peace among Member States and members of civil society. In addition, the Office continued to focus on UNESCO’s efforts amid the COVID-19 pandemic and the UN-wide priorities to build back better and in education to build back equal, including op-eds and news features highlighting relevant efforts published in major regional news platforms, reinforced by a comprehensive social media campaign. 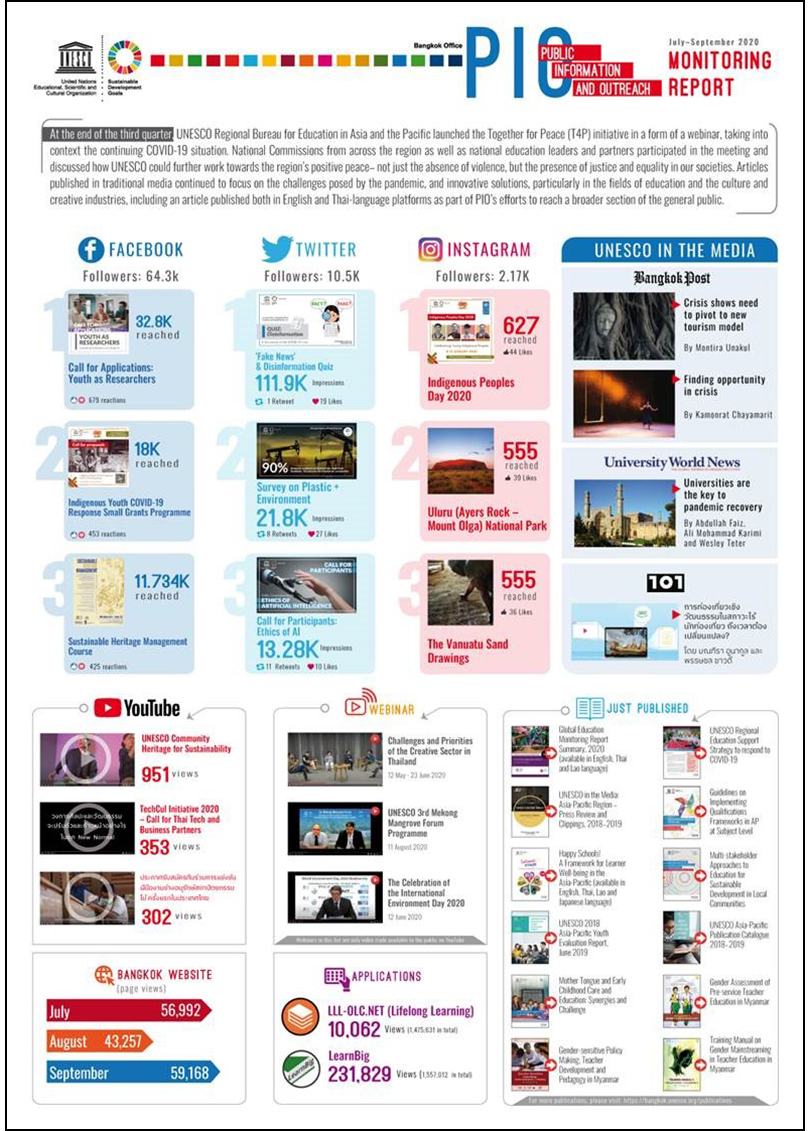 At the end of the third quarter, UNESCO Regional Bureau for Education in Asia and the Pacific launched the Together for Peace (T4P) initiative in a form of a webinar, taking into context the continuing COVID-19 situation. National Commissions from across the region as well as national education leaders and partners participated in the meeting and discussed how UNESCO could further work towards the region’s positive peace– not just the absence of violence, but the presence of justice and equality in our societies. Articles published in traditional media continued to focus on the challenges posed by the pandemic, and innovative solutions, particularly in the fields of education and the culture and creative industries, including an article published both in English and Thai-language platforms as part of PIO’s efforts to reach a broader section of the general public. 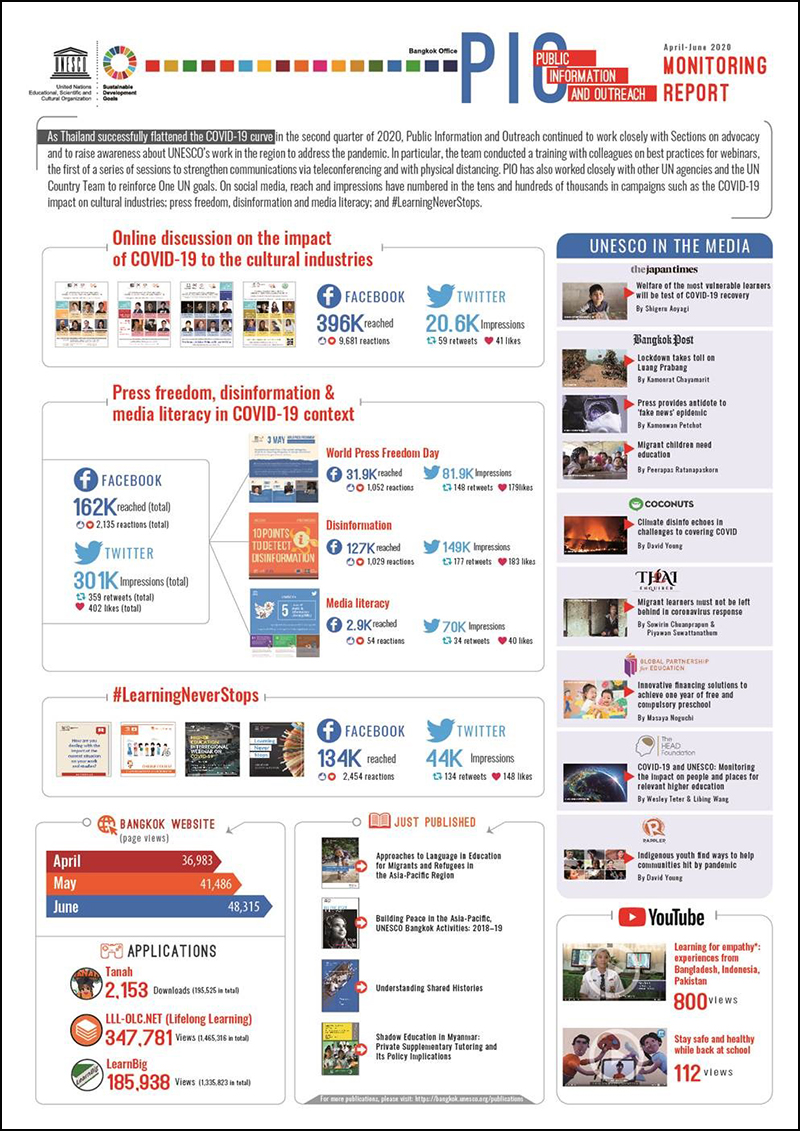 As Thailand successfully flattened the COVID-19 curve in the second quarter of 2020, Public Information and Outreach continued to work closely with Sections on advocacy and to raise awareness about UNESCO’s work in the region to address the pandemic. In particular, the team conducted a training with colleagues on best practices for webinars, the first of a series of sessions to strengthen communications via teleconferencing and with physical distancing. PIO has also worked closely with other UN agencies and the UN Country Team to reinforce One UN goals. On social media, reach and impressions have numbered in the tens and hundreds of thousands in campaigns such as the COVID-19 impact on cultural industries; press freedom, disinformation and media literacy; and #LearningNeverStops. 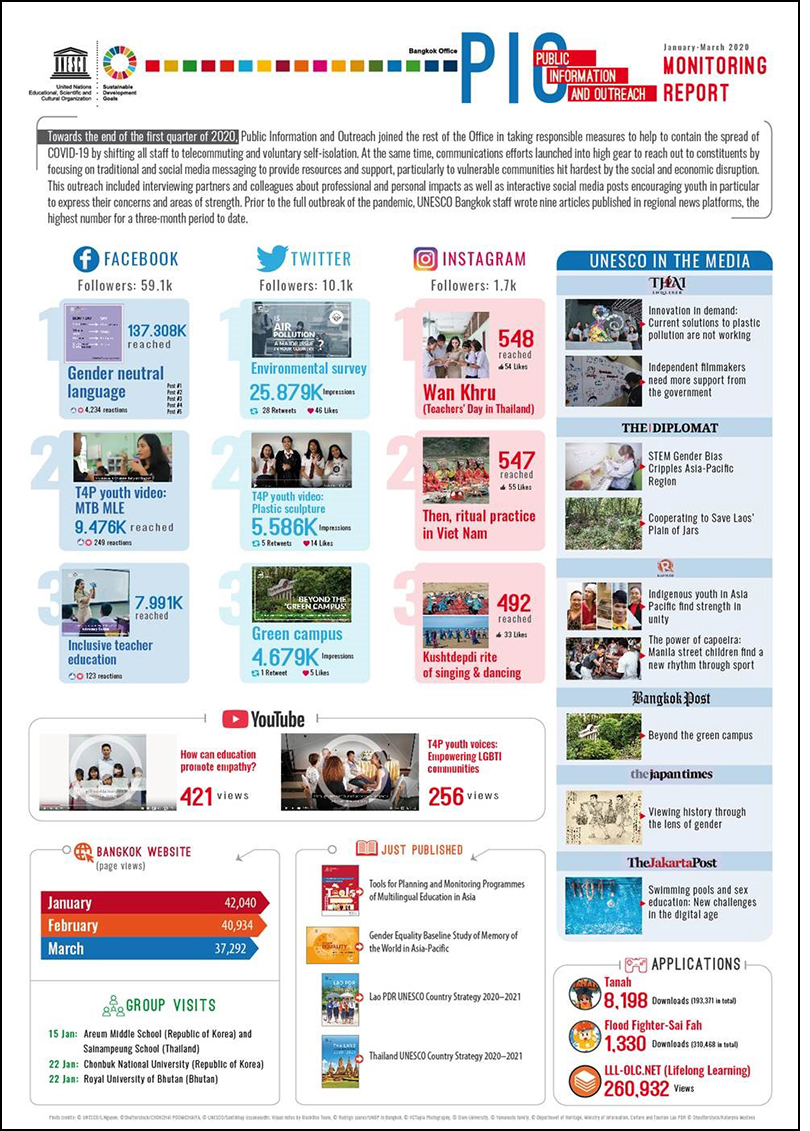 Towards the end of the first quarter of 2020, Public Information and Outreach joined the rest of the Office in taking responsible measures to help to contain the spread of COVID-19 by shifting all staff to telecommuting and voluntary self-isolation. At the same time, communications efforts launched into high gear to reach out to constituents by focusing on traditional and social media messaging to provide resources and support, particularly to vulnerable communities hit hardest by the social and economic disruption. This outreach included interviewing partners and colleagues about professional and personal impacts as well as interactive social media posts encouraging youth in particular to express their concerns and areas of strength. Prior to the full outbreak of the pandemic, UNESCO Bangkok staff wrote nine articles published in regional news platforms, the highest number for a three-month period to date. 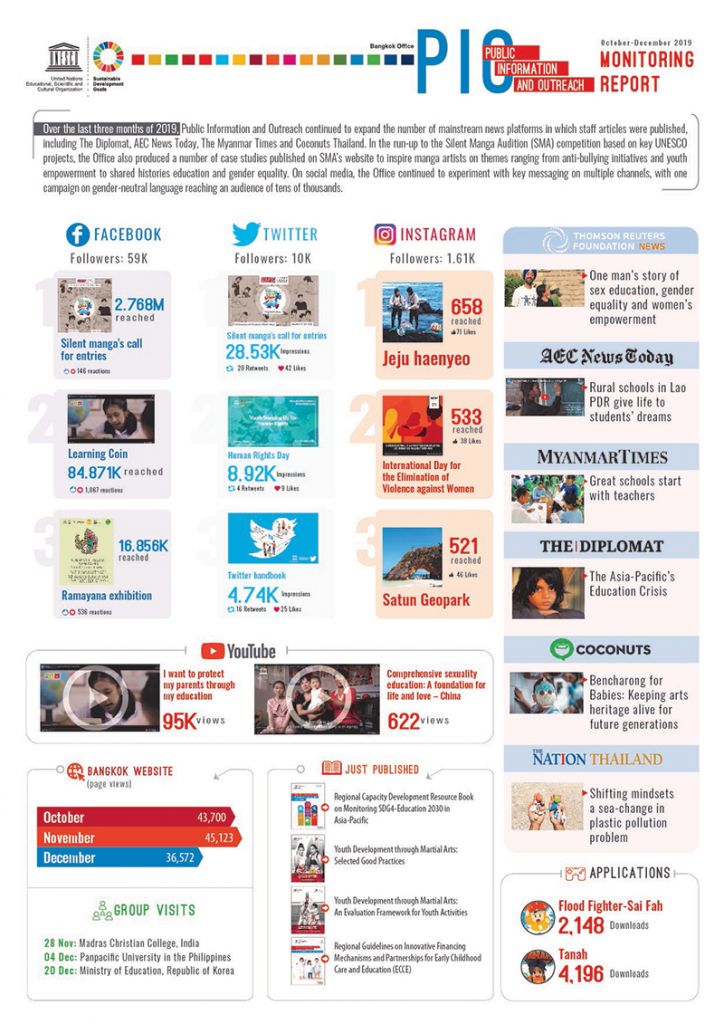 Over the last three months of 2019, Public Information and Outreach continued to expand the number of mainstream news platforms in which staff articles were published,
including The Diplomat, AEC News Today, The Myanmar Times and Coconuts Thailand. In the run-up to the Silent Manga Audition (SMA) competition based on key UNESCO projects, the Office also produced a number of case studies published on SMA’s website to inspire manga artists on themes ranging from anti-bullying initiatives and youth empowerment to shared histories education and gender equality. On social media, the Office continued to experiment with key messaging on multiple channels, with one
campaign on gender-neutral language reaching an audience of tens of thousands. To better communicate with communities across the Asia-Pacific, UNESCO Bangkok has expanded its reach to regional news outlets, including placing articles in India’s Financial Express, The Manila Times and Malaysia’s Star newspapers on such sensitive subjects such as school bullying, LGBTI sensitivity training and comprehensive sexuality education in government schools. Similarly, the first quarter of 2019 saw the continuation of themes centred on youth welfare and multilingual education in Thailand, with articles in local papers focusing on a recent case of university hazing and innovative new programmes in the Deep South. In collaboration with Natural Sciences, Public Information and Outreach is complementing the wide-ranging Plastic Initiative to raise awareness and find solutions to marine pollution. The effort is one example of the new multi-tiered approach to communications, often leading with social media and website posts, accompanied by in-house video production and submissions to regional newspapers. With our colleagues, we continue to offer different levels of engagement for the public, ranging from casual online interaction and engaging graphics to news-style features and policy prescriptions. In the final quarter of 2018, UNESCO Bangkok emphasized placing timely opinion articles in regional media, linked to news relevant to the Office’s work and policies. In one example that made headlines worldwide, the Culture Section responded to the Intangible Cultural Heritage listings in November with an article on the khon and lkhon khol listings in Thailand and Cambodia respectively, directly confronting narrow nationalistic views claiming ‘ownership’ of ICH – in complete contradiction with the spirit of the listings. Other articles responding to breaking news with informed policy focused on a school assault in Thailand and the death of a young boy fighting professionally in the Muaythai ring. The emphasis on timely, relevant outreach was also reflected in the evolving social media strategy, with the launch of the Office’s Instagram account reaching out to new audiences with clear, engaging messaging based on inspirational images. The goal of distilling key programme elements for public consumption was also complemented by the launch of an infographic series conveying UNESCO’s programmes visually and through key data points. The Office also sought to leverage these strategies in collaboration with UNESCO Offices in the region, in particular partnering with the Myanmar Antennae Office to highlight their important work on Education and Freedom of Expression. 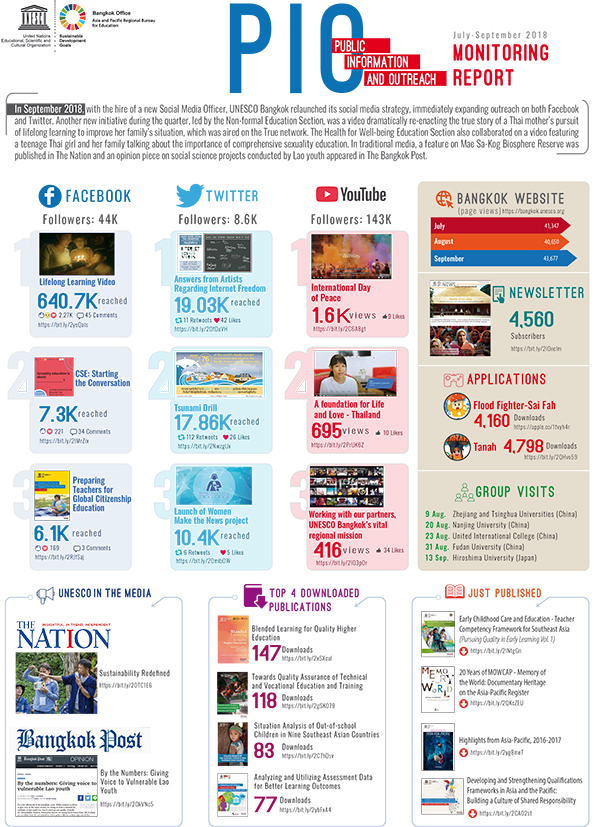 In September 2018, with the hire of a new Social Media Officer, UNESCO Bangkok relaunched its social media strategy, immediately expanding outreach on both Facebook and Twitter. Another new initiative during the quarter, led by the Non-formal Education Section, was a video dramatically re-enacting the true story of a Thai mother’s pursuit of lifelong learning to improve her family’s situation, which was aired on the True network. The Health for Well-being Education Section also collaborated on a video featuring a teenage Thai girl and her family talking about the importance of comprehensive sexuality education. In traditional media, a feature on Mae Sa-Kog Biosphere Reserve was published in The Nation and an opinion piece on social science projects conducted by Lao youth appeared in The Bangkok Post. 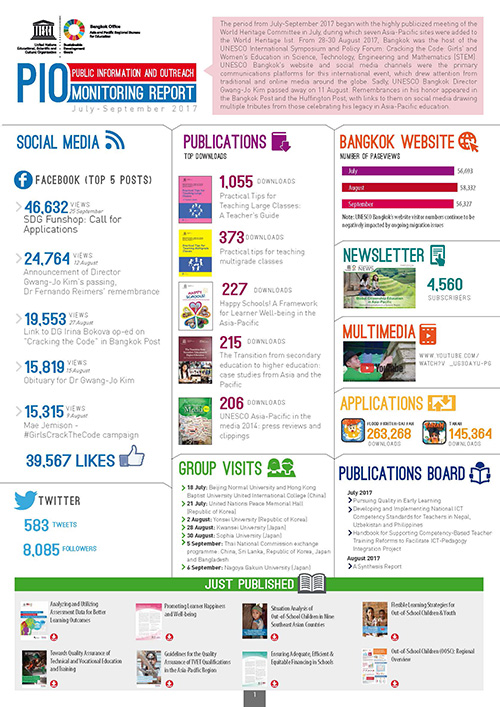 The period from July-September 2017 began with the highly publicized meeting of the World Heritage Committee in July, during which seven Asia-Pacific sites were added to the World Heritage list. From 28-30 August 2017, Bangkok was the host of the UNESCO International Symposium and Policy Forum: Cracking the Code: Girls’ and Women’s Education in Science, Technology, Engineering and Mathematics (STEM). UNESCO Bangkok’s website and social media channels were the primary communications platforms for this international event, which drew attention from traditional and online media around the globe. Sadly, UNESCO Bangkok Director Gwang-Jo Kim passed away on 11 August. Remembrances in his honor appeared in the Bangkok Post and the Huffington Post, with links to them on social media drawing multiple tributes from those celebrating his legacy in Asia-Pacific education. 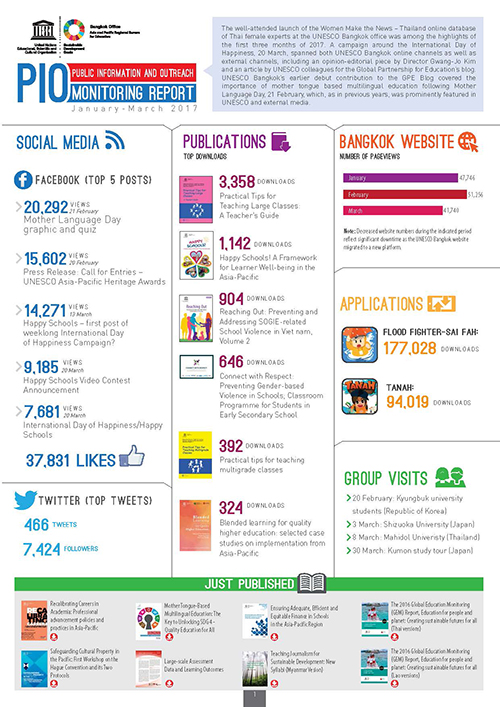 The well-attended launch of the Women Make the News – Thailand online database of Thai female experts at the UNESCO Bangkok office was among the highlights of the first three months of 2017. A campaign around the International Day of Happiness, 20 March, spanned both UNESCO Bangkok online channels as well as external channels, including an opinion-editorial piece by Director Gwang-Jo Kim and an article by UNESCO colleagues for the Global Partnership for Education’s blog. UNESCO Bangkok’s earlier debut contribution to the GPE Blog covered the importance of mother tongue based multilingual education following Mother Language Day, 21 February, which, as in previous years, was prominently featured in UNESCO and external media.