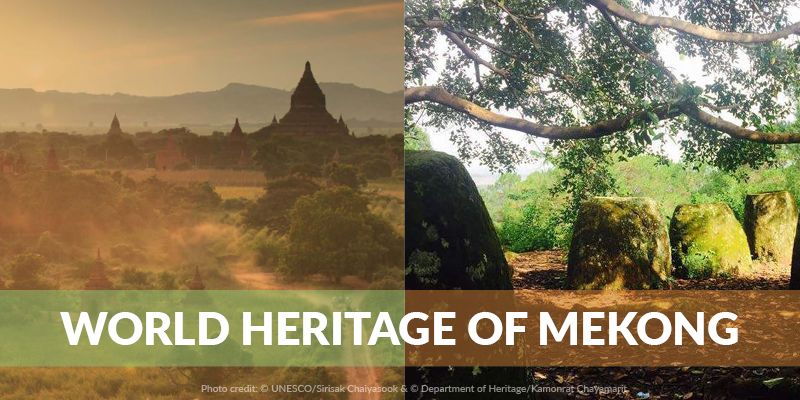 The Megalithic Jar Sites in Xiengkhuang – Plain of Jars (Lao PDR) and Bagan (Myanmar) have both been inscribed on the World Heritage List. The two sites in the Mekong countries were among nominations reviewed by the World Heritage Committee meeting in the Republic of Azerbaijan from 30 June to 10 July 2019.

At the 43rd session, Committee members consisting of 21 State Parties to the UNESCO 1972 Convention concerning the Protecting of the World Cultural and Natural Heritage examined reports on the state of conservation of inscribed properties and decide on the inscription of properties on the World Heritage List.

The Megalithic Jar Sites in Xiengkhuang Plateau, consisting of 15 components containing 1,325 large carved stone jars and associated elements used for funerary practices between 500 BCE and 500 CE, or possibly as late as 800 CE. The sites are considered a “serial property” consisting of two or more unconnected related areas. Located on hill slopes and spurs surrounding the central plateau, the well-crafted jars required technological skill to produce and move from the quarry locations to the funeral sites. The property was proposed to be inscribed under criterion (iii), being an exceptional testimony to an Iron Age civilization. The distribution of the sites is thought to be associated with overland routes at the historical crossroads between the Mun-Mekong and the Red River/Gulf of Tonkin systems.

Bagan is a sacred landscape that features an exceptional array of Buddhist art and architecture, demonstrating centuries of cultural tradition of Theravada Buddhist practices of merit-making, providing dramatic evidence of the Bagan Period from the 11th to 13th centuries. The serial property of eight components is located in the central dry zone of Myanmar, consisting of 3,595 recorded monuments. Being a complex, layered cultural landscape that also incorporates living communities and contemporary urban areas, Bagan was proposed for inscription for being an exceptional and continuing testimony to the Buddhist cultural tradition and to the peak of Bagan civilization under criteria (iii), for containing an extraordinary ensemble of Buddhist monumental architecture under criteria (iv), and for being an exceptional example of living Buddhist beliefs and tradition of merit making under criteria (vi).

In addition to the criteria, both sites met the conditions of authenticity and integrity, and being placed under adequate management and protection. All these requirements make up the Outstanding Universal Value, which means cultural and/or natural significance so exceptional that it transcends national boundaries and is of common importance for present and future generations of all humanity. UNESCO Offices in Bangkok and Yangon have worked closely with national counterparts in both Lao PDR and Myanmar to build capacity and put in place systems for effective management.

Beside the World Heritage Committee members, the meeting was also attended by all State Parties to the Convention, Convention’s Advisory Bodies, heritage experts and heritage organizations. The meeting also discussed various issues related to the implementation of the Convention and the inclusion of sites into the List of World Heritage in Danger.