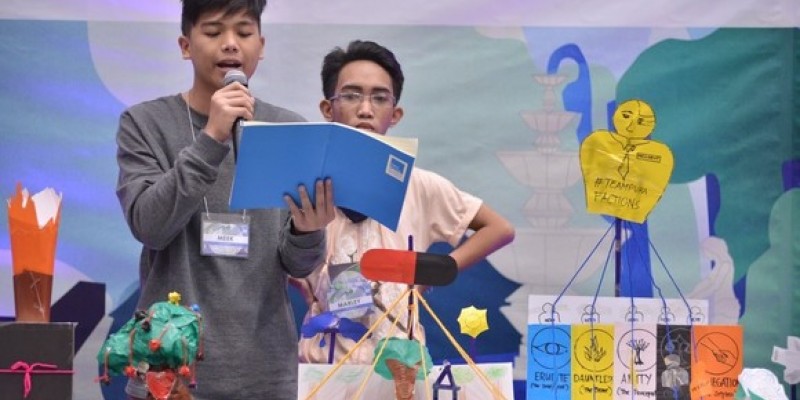 What is futures literacy? “Literacy” usually refers to the capacity to read and write and being literate about the future is much the same. Like reading and writing, it involves an ability to understand, communicate and create.  Thinking about the future allows us open our minds – to see opportunities to realize our visions and create stories to map out the steps on how to get there. “Futures literacy” focuses on a person’s capacity to think in these creative directions, helping them to ask new questions, solve old problems and make sense of their environment. As with any new skillset, building competency in futures literacy involves practice and training, gaining experience, imagining possibilities and exploring unknowns.

In November 2016, 105 young leaders from across the Philippines were introduced to the concept of futures literacy during a training organized by UNESCO Bangkok, working closely with the First Pacific Leadership Academy.

The aim was to encourage them to use the idea to rethink the concept of leadership and decide on which approach would best suit a sustainable and globalized world. The inspired and creative group imagined many different futures, from glimpses of a walled and “fractioned” society to harmonious and open communities.  In the process, they became more “futures literate” and inspired to pioneer new approaches to leadership in line with their dreams for a better Philippines.

The training used principles developed and tested under UNESCO’s Futures Literacy effort led by Riel Miller. The student leaders plunged into a laboratory situation where “serious games” (those with learning rather than strictly entertainment objectives) and collective intelligence tools replaced test tubes and Bunsen burners.

The lab, co-designed by Shermon Cruz, Director of the Center for Engaged Foresight - Philippines, and UNESCO Consultant for Futures Literacy, Ace Victor Aceron, began with a thought-provoking, immersive game invented by the experiential futurist Stuart Candy from the Situation Lab. “The Thing from the Future” card game invites players to imagine objects from the future as a means of better understanding their assumptions about what lies ahead.

Participants dove into the game with enthusiasm. Among the more disruptive ideas to emerge was the “seed-producing tattoo”, envisioned as a special microchip implanted in citizens’ arms that creates a tattoo on the skin, the shade of which brightens for every good deed performed, and darkens with every evil act. The tattoo gradually expands and once it reaches its full size, it produces a seed that can be planted to grow trees.

The object of the ‘Thing from the Future’ game is to come up with the most entertaining and thought-provoking descriptions of hypothetical objects from the near, medium and long-term future. It is an award-winning imagination game that challenges players to collaboratively and competitively describe objects from a range of alternative futures (Situation Lab, 2014). Photo by: First Pacific Leadership Academy

The lab was designed to explore the playful possibilities of gaming in this way to nurture systematic thinking-by-doing collective knowledge creation. Each activity involved intensive brainstorming sessions and cognitive maps that aided group discussions.

One of the lab’s highlights was the creation of sculptures meant to capture how the youth envisioned a day in the life of their imagined future. Along with building futures literacy, the activity also fostered team-building as the young participants exhibited their collaborative skills through active listening, fair designation of tasks and effective time management.

Sculptures on ‘a day in the life of the imagined future’. A rapporteur from each group presents and explains their group output to the plenary. Photo by: First Pacific Leadership Academy

In a post-workshop evaluation survey, Aceron found a growing interest among participants in United Nations’ efforts aimed at youth empowerment and inclusive education. Participants also noted that the lab provided them with opportunities to realize their potential as change-makers and gain a wider perspective about the many ways they can fulfill the role. Lead facilitator Cruz also noted that throughout the lab, the young Filipinos expressed their deep regard for family and a strong hope for the future.

“Think about how you now put [what you learned] to practice when you go home, so you do think about how you can [effect] change one small step at a time, just in your own lives,” she said. “[This] can lead to great things.”

Sue Vize, Regional Adviser for Social and Human Sciences, UNESCO Bangkok, joins the MVP Thought Leaders Summit and connects with the participating student leaders via a video call from the UNESCO Office in Hanoi. Photo by: First Pacific Leadership Academy

A full report about the futures literacy workshop may be downloaded here. Learn more about UNESCO’s Foresight Programme through this webpage or email Riel Miller at r.miller(at)unesco.org.