Paving the way for a gender-equal world 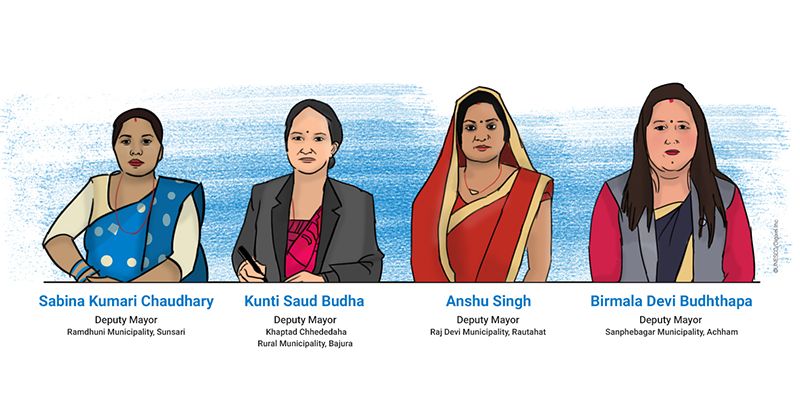 Paving the way for a gender-equal world

What were some of the hardships you faced as a girl growing up in Nepal?

Kunti Saud Budha: When I was 13, I had my first period and had to live in a cowshed for 22 days. I was scared because I had heard that other girls had been killed by wild animals or had sheds collapse on them at night. To avoid staying in a cowshed, I told my family that I no longer had my periods. I heard from other women that some girls do not experience menstruation for a few years after their first one which gave me the idea to hide my own.

Birmala Devi Budhthapa: I was married at age 16 and became pregnant by the time I was in tenth grade. I had to drop out of school to give birth and did not return to school until after I had raised three children. It was difficult juggling my roles and responsibilities as a young mother, wife, daughter-in-law, and student.

Anshu Singh: I almost dropped out of school in tenth grade because my family could not afford the exam fees. My father, the sole breadwinner of the house, suddenly lost his job which left our family in great financial distress. I have five older brothers and my family was already struggling to send all of us to school. Luckily, my teachers supported me, and the school waived my exam fees, allowing me to take the exam and graduate.

Sabina Chaudhary:
When I was in school, there was a heavy focus on memorisation with very little room for independent thinking, especially for us girls. College was never an option for many of us and even the few who attended dropped out early to get married. I was one of the luckier ones who finished college in Kathmandu, which opened up so many opportunities in my life, but I often think about the others who were not as fortunate as me.

How has the UNESCO-UNFPA-UN Women Joint Programme helped you as a woman leader?

Kunti: After becoming Deputy Mayor, I took part in a one-week program on the implications of child marriage on girls’ education organised by the Joint Programme, which motivated me to launch young girls’ clubs in schools aiming to abolish child marriage in my municipality.

Birmala: The training really shed light on the need for education on sexuality. A lot of young women were missing school when they were on their period because they had to walk to school for an hour or more. So, we (the municipality) launched a campaign to distribute sanitary pads to young girls so that they could continue going to school during their periods. The training also helped me build confidence to talk about these issues and gave me the resources and skills to educate others, especially young women. I incorporated a lot of the material from the training into my radio advocacy program to raise awareness in my community.

Anshu: The Joint Programme’s training on CSE made me realize that when women learn about their bodies and health, they become more courageous and are able to stand up for themselves and speak out against the violence they face. I now organize awareness-raising events and workshops for students and local government officials, based on what I learned. The training also gave me the skills to help people in my community recognize gender discrimination in their own practices. You cannot go to a person and tell them they are committing gender-based violence or being discriminatory. They would outright deny it and become defensive. You have to start with simple examples like asking them why their daughter is not in school but their son is, and whether they think that is OK.

Sabina: During the training many working women shared that they received a lot of pressure from their families to not work late or not work with men. The discussions made me realise that if women are to be equal to men in society, we had to let them break away from our traditional gender norms and support them as they pursue education and career paths outside of their households. I’m now working with community members to help people understand that it is acceptable for women to work outside of their homes and earn income, so that more women can consider having a career without the fear of judgement from their communities.

What words of encouragement do you have for future women leaders?

Kunti: It may feel like there is no change happening, even when you continuously speak out against gender-based violence or chhaupadi (a social practice of isolation during menstruation). But remember that there is change. It can be witnessed in people’s newfound knowledge and changed perspectives.

Birmala: It is encouraging to see more and more young women become confident enough through training opportunities such as those provided by the Joint Programme to speak up against the gender-based violence that happens in their communities. The more we speak up, the closer we will get to creating an ideal society where no one is discriminated against based on their caste, gender, or age.

Anshu: I do not think my generation will be able to eradicate all the issues women face because we ourselves still hold many of the destructive gender biases and stereotypes. However, I will keep on trying to raise awareness about what I have learned so that future generations do not fall victim to the same harmful traditions and practices. My grandfather used to tell me you should start something if you believe it is good, even if you are alone. If it is for a good cause, people will support your message and join you.