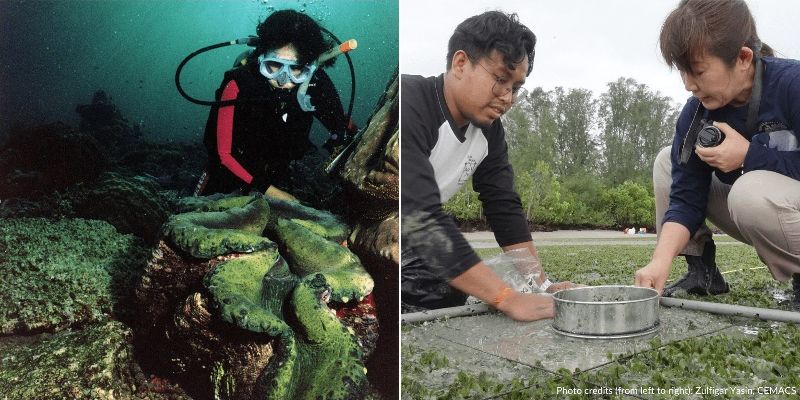 Like many of her male counterparts who regularly endure long and exhausting ocean research expeditions, the braving of challenging environs makes for a typical workday for Aileen Tan Shau Hwai, director of the Centre for Marine & Coastal Studies at the Universiti Sains Malaysia. Readily found in the classroom when she is not charting regional ocean coastlines, Tan has acquired what might seem a curious kind of ‘ocean celebrity’: she is the first Malaysian to successfully culture oysters through artificial spawning.

If oyster cultivation seems esoteric, their populations can yield important insights into the health of our oceans, which ultimately effects everybody, no matter whether you reside along the coast or within a completely landlocked terrain. Oceans regulate the climate and influence our daily weather; they absorb carbon dioxide and regenerate oxygen; they provide sustenance for billions of people and present millions with job opportunities.

“The ocean is vast, and there is a lot to be studied and explored. Research fields in biodiversity, coastal erosion, sea-level rise and climate change continually offer us new perspectives on nature, Tan explains earnestly. ‘Ocean scientists are looking into marine resources for food security, health solutions, and potential new energy sources”.

On this year’s International Day of Women and Girls in Science (11 February), Tan’s example is a reminder that the pursuit of gender equality in ocean science is vital if we are to achieve the United Nation’s Sustainable Development Goals by 2030 – only eight years from now.

“Water Unites Us” is this year’s thematic underpinning, suggesting that it is particularly critical for the well-being of the Earth’s last frontier, the ocean, that we bring nations together in a common pursuit of a healthy, resilient and sustainable ocean.

It may be startling to some to learn, then, that a vast majority of the ocean remains largely unknown to us. What we do know is that humans are exerting ever-increasing pressure on the ocean, the negative effects of which are already multiple in nature. In the Asia-Pacific region, we must gain a better understanding of what is happening to this highly populous, industrially advancing yet fragile hemisphere, home to the richest marine life abundance and diversity on the planet.

To achieve a sustainable ocean, gender equality in ocean science is vitally important if we are to increase innovation and foster groundbreaking discoveries, no less develop accurate ocean science solutions to the long-term sustainability of our oceans.

“Thirty years ago, when I started my career in ocean science, there was a very limited number of female marine scientists practicing, so I had to adapt myself to an entirely male-dominated profession, indeed without expecting any special treatment. In recent years, gender equality has come into focus, and thus female scientists have better educational opportunities. In fact, you might say that being a female scientist is becoming a kind of advantage these days,” Tan reflects.

It is certainly justifiable to conclude that women in ocean science have advanced greatly throughout the region in recent years. As increased opportunities for education and employment have become widely available for women in the Asia-Pacific region, more women scientists are emerging from countries like China, Malaysia, the Philippines, Thailand, and Viet Nam. These women scientists are actively engaged in ocean science and delivering on their knowledge in ways that are increasingly benefiting society and protecting the oceans around us.

But despite this remarkable progress, women are still, by and large, underrepresented in ocean science professions in the Asia-Pacific region. According to UNESCO’s ‘Global Ocean Science Report’ of 2020, the number of women ocean researchers averaged 39 percent globally; more recent reports put the Asia-Pacific regional numbers at about 30 percent – a notably less impressive figure.

As Tan cautions, “The Marine Science major is not popular in this region. Doing ocean research is challenging for both male and female scientists, but perhaps most for the females; being a female marine scientist requires a lot of perseverance and patience. It’s hard work, but it can lead to such a sense of accomplishment when our ocean science research successfully translates into improving the livelihoods of the region’s communities”.

If gender equality in ocean science has a long way to go in the region, women are nonetheless becoming more involved in generating knowledge about, managing our ocean resources, and helping others like them follow in their footsteps. Advocacy efforts by others can help, such as the ongoing ocean science cooperation in the region that UNESCO’s Intergovernmental Oceanographic Commission has been advancing for several decades, namely by supporting and empowering women.

Just as important, ocean issues are ultimately transnational, as the waters of the world flow without respect to political boundaries. And developing our understanding of the vast ocean presents far too formidable a task to be undertaken by any single professional group, community, or nation. All voices matter. Thus as women ocean scientists increasingly stand on the frontlines of research to promote international cooperation in addressing global issues, more research will turn into practical action, making the planet a better place for all.

The 2021 launch of the UN Decade of Ocean Science for Sustainable Development calls for full and equal access to, and participation in ocean science for women and girls. In that spirit, over the next ten years, the UN Ocean Decade programs will systematically identify and dismantle barriers to achieving gender and generational balance, so that no one is left behind.

*The article was first published in Thai PBS World, 9 February 2022