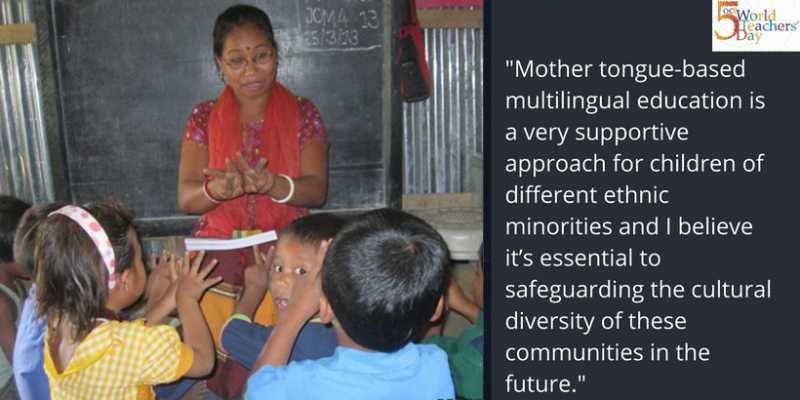 Mother tongue based multilingual education (MTB-MLE) offers a pathway to better education and better lives for the millions of ethnolinguistic minority language speaking children in Asia-Pacific.

Earlier this year, on the occasion of International Mother Language Day (21 February), UNESCO Bangkok shared the stories of MTB-MLE educators from throughout the region. These dedicated professionals work in remote and often challenging environments to provide ethnolinguistic minority language speaking children with the foundation they need to thrive.

We are pleased to share their stories again following the recent World Teachers’ Day Forum in Bangkok and in advance of the upcoming 5th International Conference on Language and Education: Sustainable Development Through Education, in Bangkok from 19-21 October.

Chandana Tripura is an MTB-MLE teacher in Bangladesh. Growing up as a speaker of the Kok Borok language, she found instruction in Bangla "totally incomprehensible" and feared going to school. Now as an MTB-MLE educator teaching the second grade she delights in seeing her students excel and benefit from the approach. Chandana's story

Najalal Tripure is also an MTB-MLE teacher in Khagrachari district. Growing up, he tried desperately to memorize words he couldn’t understand because he feared the beatings that would come if he gave an incorrect answer in class. Now as an MTB-MLE educator, he inspires and is inspired by his students’ confidence. Najalal’s story

Rasmila M. Cosain is an MTB-MLE educator and guidance counsellor in Lanao del Norte in the southern Philippines, where the majority of people speak Maranao. She grew to appreciate the benefits of the MTB-MLE approach in the restive region. "With improved language teaching, learners in my region have one less obstacle to education," she says. Rasmila's story

Ting Sain was a policeman before a landmine accident resulted in him losing one of his legs and forced him to retire from active duty. The Cambodian native took the opportunity to enroll in an MTB-MLE programme, learning first to read and write and then to teach other fellow speakers of the Tampuan dialect common in Ratanakiri province. Ting Sain's story

Pakistan’s national language is Urdu, however regional languages are spoken in villages throughout the country. Three teachers share their stories of growing up without MTB-MLE education and the immense difference it has made in the lives of the young people they now teach. Pakistan stories

Assanah Binsulong teaches in an MTB-MLE pilot project in Narathiwat province in southern Thailand. She contrasts her own experience growing up frustrated and confused in school to those of the students in her pilot project who are so eager to learn they "run to grab books". Assanah’s story

Suraida A-wae is an MTB-MLE educator in Pattani province, also in southern Thailand. She says the approach helps remove a major obstacle separating Patani-Malay speakers from the rest of Thai society. Suraida’s story

Tuanyoh Nisani, who teaches an MTB-MLE program in Pattani, southern Thailand, says the approach not only benefits students immensely in the foundational years of their education, but also protects and preserves their cultural identity. Tuanyoh’s story.

Mother tongue educators from throughout the Asia-Pacific region will be joining experts, policy-makers and others active in the field for the 5th International Conference on Language and Education: Sustainable Development through Multilingual Education from 19-21 October 2016 in Bangkok.