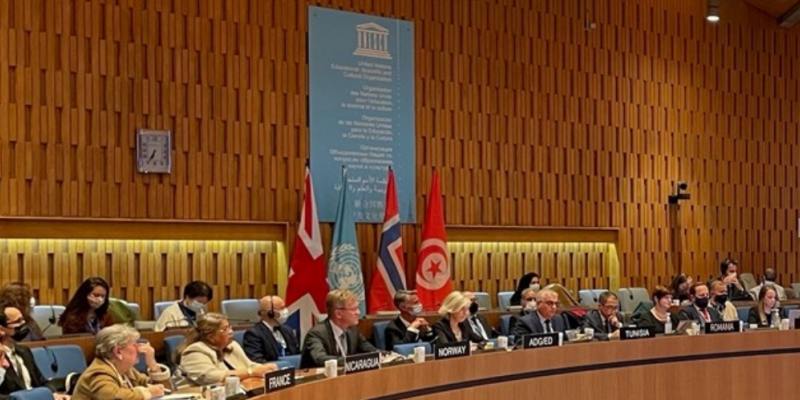 On the eve of the second anniversary since the adoption of the Global Convention on the Recognition of Qualifications concerning Higher Education, countries came together at the General Conference of UNESCO to renew momentum around its role for building connected higher education systems to support the SDGs.

A side event on the Global Convention was co-organized by the governments of Norway, Tunisia, the United Kingdom and UNESCO on 11 November, on the margins of the 41st session of the General Conference. It brought together Ministers and high-level representatives of the five States Parties – Norway, Nicaragua, Estonia, France and Romania – as well as Tunisia and the United Kingdom who are in the final stages of joining the Convention.

Stefania Giannini, Assistant Director-General for Education, highlighted that higher education continues to evolve dramatically. “220 million students enrolled in universities around the world – a number that has almost doubled in the last 15 years and is set to double again by 2030,” she said. “More than 5 million are going abroad to study, compared to just 2 million in 2000.” These trends are increasingly placing recognition and mobility at the top of education policy agenda.

The Global Convention is key to “encouraging cooperation among education systems, bringing students, researchers and education personnel around the world closer together and ultimately facilitating their work and lives,” said Tunisian Education Minister Fethi Sellaouti. Tunisia is preparing to deposit its instrument of ratification at the UNESCO Conventions Ceremony on 19 November, becoming the first State Party from the Arab region.

“To fight ignorance about each other’s ways and lives we need to promote the movement of people, we need to promote opportunities for the future generation of leaders to study abroad and learn to understand other cultures, other languages and the history on which those are based upon”, highlighted Mr Oddmund Løkensgard Hoel, Norwegian Deputy Minister of Research and Higher Education.

Norway, the first country to join the Global Convention, echoed the words of the Assistant Director-General for Education, calling on countries to ratify it and make recognition and mobility a reality for millions.

In addition to Tunisia and the United Kingdom, representatives from Australia, the Holy See and Lithuania also announced that they are in the final stages of ratifying the Global Convention, which requires 20 States Parties to enter into force.

The Global Convention is the first United Nations treaty on higher education with a global scope, implemented in complementarity with the five regional recognition conventions on higher education. While the regional conventions promote recognition, mobility and inter-university cooperation within regions, the Global Convention provides this among regions.

For questions about the Global Convention or Tokyo Convention, please feel free to contact UNESCO Bangkok at: eisd.bgk@unesco.org.