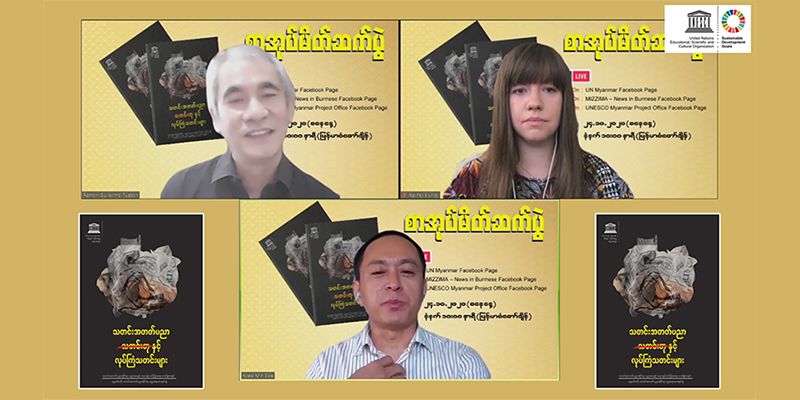 Local and international journalists and communication experts agreed that media and information literacy (MIL) is an essential mechanism to combat disinformation. This was the consensus during the virtual launch of the Myanmar edition of Journalism, Fake News and Disinformation held on 24 October 2020.

The launch marks the start of the Global MIL Week celebration in Myanmar, which culminates on 31 October 2020.

In a taped video message for the event, Dr Julie Posetti, co-editor and co-author of Journalism, Fake News and Disinformation, emphasized that critical and independent journalism is crucial in combatting disinformation that has become more pronounced during this pandemic and also during elections. She cited how disinformation has “disrupted” democratic processes in many countries with the “weaponization” of the Internet.

The book provides professional context and is referenced by past lessons in dealing with unprofessional journalism practices, Dr Posetti said. She also warned of targeted online disinformation campaigns, especially those directed against women journalists, which can cross over to physical violence.

Mr Kyaw Min Swe, chief editor of The Voice Journal, said disinformation flourishes during elections in Myanmar. Common disinformation practices are the spread of rumours and libelous statements against candidates or their political parties. Worse, there is disinformation that foment hate speech. The Voice Journal editor-in-chief also pointed to practices of online media outlets to copy, without attribution, news stories published by mainstream media to make revenue from online advertisements.

He added that mainstream media outlets should be more careful in their coverage of election issues as they are targeted for disinformation by vested interest groups. Also, these outlets can contribute to disinformation if they do not engage in verification and other good journalism practices.

Fact-checking through independent entities or internal to media houses can help to ensure accuracy of news stories. In her talk, Ms Rachel Blundy, Senior Asia Pacific Editor for AFP Fact Check, said fact-checking was not new as all news organizations were expected to engage in verification. She said news agencies should set up their respective fact-checking units and to collaborate with external fact-checking groups such as NGOs that are committed to objective reporting and truth-telling.

UNESCO Media Development Specialist Mr Ramon Tuazon described MIL as “the first line of defence” against disinformation as it empowered individuals to be critical users and producers of media and information content. MIL makes individuals more discerning on the content they are consuming. He also said the public should “push back” when they are bombarded by disinformation content and irresponsible and unethical journalism practices.

Another option in addressing disinformation is self-regulation by media and technology companies through code of ethics and conduct and community standards, Mr Tuazon said. He acknowledged that while government regulation is an option, it should be regarded as the last option and should meet international standards.

Since its publication in late 2018, Journalism, Fake News and Disinformation has been translated into 45 languages. While the book’s primary intended users are journalism teachers, trainers, and journalists themselves, Ms Kim said, the publication can be for anyone who values the continuing search for and defence of truth.

UNESCO undertakes these initiatives with support from the “Multi-Donor Programme on Freedom of Expression and Safety of Journalists” and the project “Preventing hate speech and promoting peaceful society through Media and Information Literacy” under UN Peace Building Fund.

The Myanmar edition of Journalism, Fake News and Disinformation can be downloaded at https://unesdoc.unesco.org/ark:/48223/pf0000374458

The discussion at the virtual launch can be watched on the following Facebook pages: