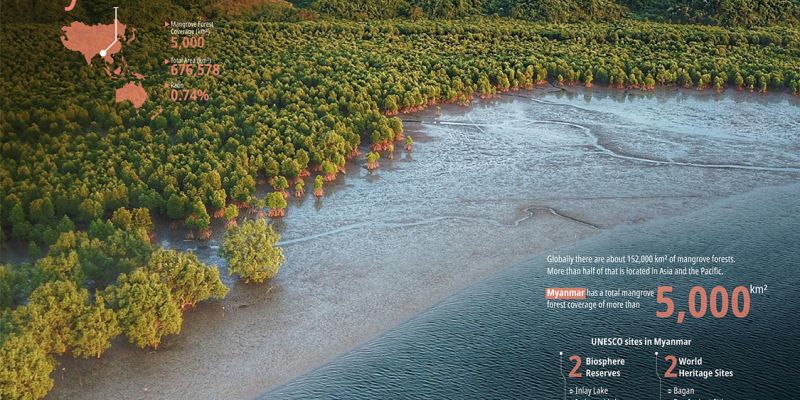 Mangroves occur in the tropics and sub-tropics along low energy saline coastal zones, in brackish deltas, and, very rarely, in freshwater systems. Globally there are about 152,000 km2 of mangrove forests. More than half of them are located in Asia and the Pacific, 46,000 km2 in the Americas, 28,000 km2 in Africa, and 625 km2 in the Middle East and the Arab Region, in 125 countries and territories (please view the World ATLAS of Mangroves 2010, which was co-produced by ITTO, ISME, FAO, UNEP-WCMC, UNESCO, United Nations University, and The Nature Conservancy).

UNESCO and partners organized the 3rd Mekong Mangrove Forum on 1st of October 2020. The Mangrove Action Project (MAP) agreed to contribute a slide show on its Photographic Contest of international mangrove photography, with some highly spectacular results.

UNESCO in partnership with the Thai National Science Museum (NSM), was developing posters in support of UNESCO Biosphere Reserves, World Heritage Sites, and Global Geoparks, for the new Rama IX Museum. Considering the beauty of the photos shown by the Mangrove Action Project, MAP was invited to provide photos for the production of posters. They agreed, and UNESCO in partnership with NSM and MAP selected 12 initial countries for the new poster series, including countries from the Greater Mekong Sub-Region, and Asia and the Pacific. The countries that were included in this first batch include Cambodia, India, Indonesia, Myanmar, Philippines, Singapore, Thailand, Viet Nam, and the Federated States of Micronesia. Madagascar, Cuba, and the UAE were included, to demonstrate the international dimension of mangrove biogeography.

The posters consist of a beautiful photos, basic statistical information on mangroves of the concerned country, based on information obtained from the World ATLAS of Mangroves. They also provide basic information on UNESCO sites in these countries, as of December 2020.

A second batch of posters is currently being planned for production in 2021, including 60 additional countries, and a third batch in in discussion for 2022.