LGBTI training in the Philippines promotes inclusion and counters ignorance 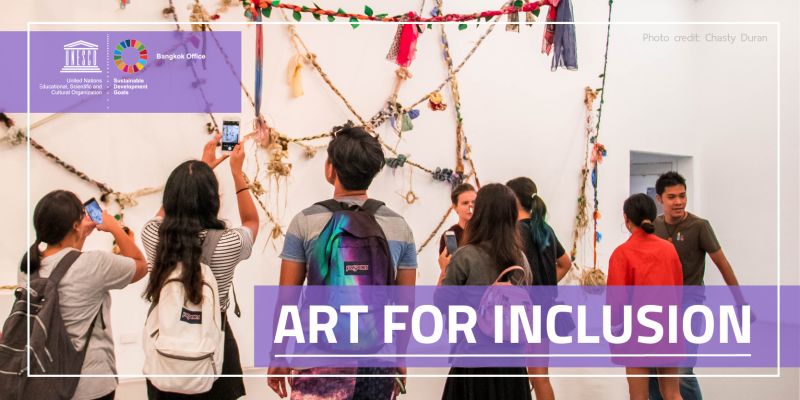 LGBTI training in the Philippines promotes inclusion and counters ignorance

‘My grandmother still thinks we will probably go to hell, but at least she tolerates and works on accepting us a little bit more.’ For Shamah Silvosa Bulangis, president of the Silliman University LGBTQ+ student organization ISPEC (Illuminates of the Spectra), reconciling who she really is with her family’s expectations is still ‘one step at a time’.

Her situation will resonate with many lesbian, gay, bisexual, transgender and intersex (LGBTI) people in the Philippines and beyond. About 73% of respondents in the Philippines believe that homosexuality should be accepted by society, according to the Pew Research Centre, but that statistic shrouds deep-seated prejudice and discrimination. Many LGBTI people in the Philippines still face considerable stigma and insults such as salot ng lipunan, which translates approximately to ‘dregs of society’, immoral, sinner or even accused of being possessed by evil spirits. Deeply rooted bias leads to abusive behaviour – explicit threats or acts of physical violence, verbal and emotional abuse, bullying, non-consensual touching, sexual harassment, coercion and assault, and exclusion.

The education system is central to the issue, both as an environment featuring endemic bullying, abuse and bias, but also as an opportunity for innovation and alliance-building related to sexual orientation and gender identity or expression (SOGIE). A third-year student at Silliman, who asked to be referred to as Anch, said bullying remained the principal challenge for LGBTI students, which she had personally experienced. ‘To be judged by the community, it has always been a stigma and it’s time to highlight it now,’ she said. ‘The members of the LGBT community are excluded in society and labelled as different. That needed to be addressed today.’

In that context, the recent ‘Strands Together’ project at Silliman University in Dumaguete, Southern Philippines, sought comprehensive responses through empathy and mutual respect. The sensitization training sessions emphasized using art as a medium for advocacy and to raise awareness about on-campus violence and bullying with the objective of promoting safe and inclusive schools for all learners, including LGBTI students. ‘Visual art is a good vehicle for visibility. This shows the issue from a very different perspective but effective in a way that it raises the issue in a non-stereotypical manner,’ said Irma Lacorte, a visual artist and the Fine Arts Department faculty member coordinating the project. Silliman University, Asian College Dumaguete and Negros Oriental State University participated in collaboration with UNESCO Bangkok and with the support of UNDP’s Being LGBTI in Asia initiative. 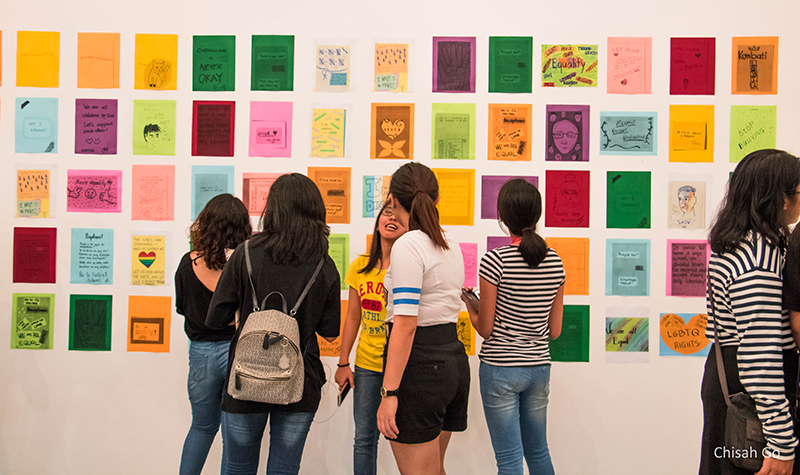 ‘Strands Together’, which symbolizes how individuals, communities, schools and school leaders, and students need to come together, is also a response to recent reports of gender discrimination. Gender-based forms of violence, including SOGIE-based violence, can undermine students’ right to education and sense of belonging in school, as well as lead to adverse health and educational outcomes, increased absenteeism and decreased participation in school-related activities. ‘[There is] institutionalized homophobia and transphobia that comes from ignorance by a portion of the university community that often has authority,’ Bulangis said. ‘The logical solution is to cure the ignorance is through education. I am a strong believer in education for change.’

The Philippines has made incremental progress, with a marriage equality law now under review by the Supreme Court. Equally significant, a positive trend in general awareness is increasingly apparent, such as the outpouring of respect and love responding to a recent Pantene commercial featuring the inspirational story of a transgender model. But those hopeful initiatives are often met by retrograde homophobia, as evidenced by the vitriol the marriage equality law elicited, and even the hateful statements made by leading politicians.

Hateful rhetoric is always rooted in ignorance. ‘In the same way that talking about sex seems to be radical in Filipino basic education, talking about sexual orientation and gender identity and expression seems more taboo,’ Bulangis said. ‘This means that while the Philippines ranks high in gender equality in South East Asia, the religious overhang is still entrenched in the culture so the effect is – you can exist, but we won't try to understand you. Tolerance is high, but acceptance, not so much.’ She points to a lack of understanding of SOGIE among educators and the wider student body as a contributing factor to related violence.

The insight into the distinction between acceptance and tolerance is at the heart of the recent project. Mere tolerance is in effect a denial of identity and, in turn, of equal humanity. The ‘Stands Together project shows solidarity for LGBTI learners and issues a call to action to make schools more inclusive and safe for all learners.

The project builds on previous progress. In one example, students requested that they could wear gendered uniforms that align with the gender they identify with, and schools reacted with sensitivity and granted the request. In September 2018, Silliman University President Dr Betty Cernol-McCann signed a directive to establish the first on-campus, gender-neutral restroom. Petitions to include SOGIE and diversity training in the school’s required curriculum have also been advanced by ISPEC with the help of allies from the Psychology Department and other faculties.

To address the prevalent ignorance that we still so often see related to SOGIE issues, such sensitivity training must be extended to all learners. ‘It will make people realize that the pressure society puts on all of us is not normal and that we can do something about it,’ said Alex Villarino, a third-year Fine Arts student at Silliman. ‘They made us think complacency will mean a peaceful life – that may be survival, but it definitely isn’t a way to live. We all need that reassurance that our struggles are valid, and that in this fight, we are not alone.’

*This article was originally published in The Manila Times