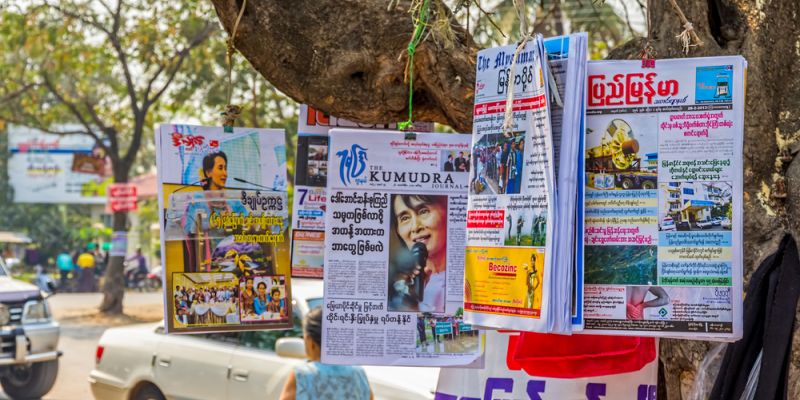 Legal protection is a priority concern for Myanmar journalists. This was the consensus met by government officials and journalists during a virtual forum held on 11 December 2020 to commemorate three interrelated events – World Press Freedom Day, International Day to End Impunity for Crimes against Journalists, and International Human Rights Day.

The event was organized by UNESCO Myanmar Office and Myanmar Press Council (MPC) with the theme “Safety of Journalists: Practicing Journalism Without Fear or Favor”.

Myanmar’s democratic transition is “a work in progress”, said MPC Second Vice Chairman U Kyaw Naing. “Society is responsible for creating a safe environment” and all sectors should unite to fight violence.

“Journalists, media, and citizens should be protected by the government,” said U Han Nyunt, a member of the Anti-Corruption Commission.

There are existing laws that journalists and citizens should know and understand, as they affect news coverage, said U Nyo Tun, Deputy Director-General of the Office of Union Supreme Court. Among these are the Official Secrets Act, Law Protecting the Privacy and Security of the Citizens, Counter Terrorism Law, Child Rights Law, Anti-Trafficking in Persons Law, Literary and Artistic Copyright Law, Telecommunications Law, and relevant provisions of the penal code. He added that access to information is provided for in several provisions of the News Media Law.

Journalists who attended the virtual forum said, however, that some laws limited access to information and even threatened journalists’ safety. Daw Ei Ei Toe Lwin, Chief Election Correspondent of Frontier Myanmar, called attention to the prohibition for journalists to interview representatives of non-state actors, which the government has declared are terrorist organizations. This policy makes it difficult for journalists to present both sides of a conflict story, she added.

U Han Nyunt of the Anti-Corruption Commission, a former journalist, said media and civil society organizations should lobby “within reasonable ground” with parliamentarians for the repeal or amendment of existing laws that they think are restrictive.

Other threats facing journalists raised during the forum were physical and mental health concerns related to coverage of COVID-19 pandemic. Daw Ei Ei Toe Lwin said this has limited access to information as travel has been curbed and poor internet connectivity has compounded the problem. She said these problems contributed to inadequate coverage of the 8 November general elections, especially in remote communities.

Dr. Zin Mar Kyaw, Professor and Head of the Department of Journalism of the National Management Degree College (NMDC), said the curriculum had incorporated journalist safety and protection. The Department also works with the news media, which employs half of NMDC graduates, to ensure that the curriculum is practical and relevant to industry needs. Dr. Zin Mar Kyaw added that a professional journalist practices safety precautions when facing risks.

U Nyo Tun also said UNESCO and the MPC should work with the Union Supreme Court in pursuing the Judicial Strategic Plan (2018-2022), particularly in the area of public awareness. He added that the Court organized a coordination meeting each year with international organizations such as JICA and USAID to invite them to submit project proposals related to implementation of the Strategic Plan.

During the forum, UNESCO Head of Office Ms. Min Jeong Kim called for a multi-stakeholder initiative to craft a Myanmar Plan of Action on the Safety of Journalists. In 2012, the UN called upon Member States to develop and adopt their own plans of action in an inclusive, participatory and stakeholder-driven process. The UN has designated UNESCO to anchor this initiative.

A video of virtual dialogue can be watched at UNESCO Myanmar Project Facebook page: www.facebook.com/UNESCOMyanmar/posts/192774602563184