Lao-UNESCO Programme to Safeguard the Plain of Jars 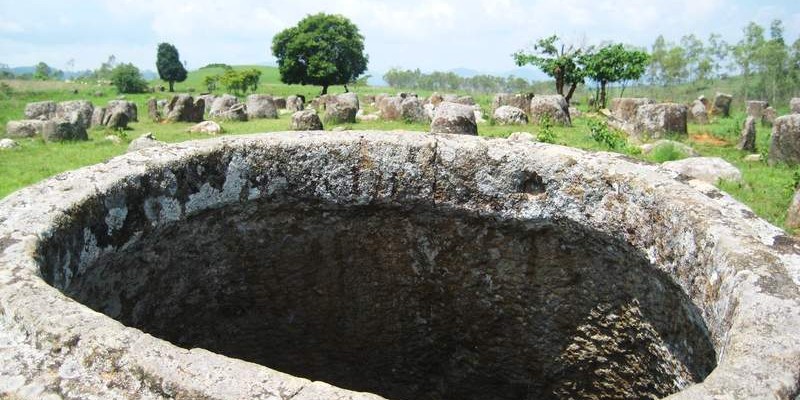 Lao-UNESCO Programme to Safeguard the Plain of Jars

In 1998, Xieng Khouang Province, UNESCO and the Government of Lao PDR initiated a multi-year phased programme to safeguard and develop the Plain of Jars. The goal of this Lao-UNESCO Programme for Safeguarding the Plain of Jars is to put mechanisms in place that ensure ongoing protection of the heritage resourceslinked to bringing socio-economic benefits for the local communities.

The Plain of Jars Archaeological Landscape

The landscape of the Xieng Khouang plateau is dotted throughout with thousands of stone jars, in clusters from one to over a hundred jars. Initial study of the Plain of Jars by French archaeologist Madeleine Colani in the 1930's suggested that the stone jars are associated with the burial practices of the protohistoric communities living in the area. Excavation by Lao and Japanese archaeologists in the intervening years has supported this interpretation with the discovery of human remains, burial goods and ceramics dated, by comparative material from Dong Son in Viet Nam, to the Early Iron Age from approximately 500 BCE to 800 CE. Some sites contain more than 250 individual jars. The tallest jars are more than 3 meters in height and while most are undecorated, a few have carved human figures or faces. Circular stone discs found near the jars, and presumed to be lids, are also sometimes carved with representations of humans, tigers or monkeys.

The artifacts from the Plain of Jars constitute an exceptional collection for the study of the late prehistory of mainland Southeast Asia. The jars' striking and enigmatic presence has given to the Xieng Khouang Plateau the name The Plain of Jars; little is yet known for certain about the people and culture which produced them.

Background The Xieng Khouang Plateau was subjected to intense carpet bombing during the regional conflict in Indochina of the 1950s, 1960s and 1970s. It is the most heavily bombed country, per capita, in the world. During the bombing, many jar field sites, particularly those in prominent exposed locations, were extensively damaged. Un-detonated bombs, land mines and other unexploded military ordnance still contaminate more than 25% of the province's total land area and continue to threaten the lives of the 200,000 people who now live in Xieng Khouang. This ordnance remains a constant threat to personal safety and a serious impediment to the socio-economic development of the region.

However, there has been very strong growth in the Lao tourism sector since 1990. Tourism is now a major contributor to national income and employment. The major tourism activities in the province now include the exploration of jar sites as well as visits to both local ethnic minority villages and historic sites associated with the Indochina wars.

For much of the last century, archaeological research and conservation in the Plain of Jars was difficult to carry out. The cessation of conflict and the opening up of the country to the outside world has revealed the great importance of the site as well as the problems it faces, including:

UXO clearance and erosion control: Create a safe  and stable environment for local communities and visitors

The project team worked closely with the village communities and train villagers to identify problems, set priorities, raise awareness and evaluate the impact and success of the clearance operations.

Previous surveying and research has resulted in a large amount of data and information and preliminary assumptions about the history of the Plain of Jars. These findings were finalized and consolidated as detailed documentation and reports on the interpretation and significance of the Plain of Jars are required for the World Heritage nomination.

The project raised awareness and build capacity within all levels of authority, in particular at the local community level, to monitor and protect heritage resources within their jurisdiction and request assistance from higher level authorities when required.

Tourism awareness seminars provided the local authorities with an overview of the tourism industry and an update on the national tourism laws and regulations.

The project conducted additional town-based guide and English language training training for the nationally-certified and provincially-registered guides based in Phonsavanh town.

Socio-economic and cultural and natural heritage  impacts: A monitoring system including protocols for the mitigation of current and emerging threats.

In order to train guides and the local authorities in the use of the protocol, monitoring workshops were held during the second and third year of the project.

Reinvestment in site management: Mechanism to funnel part of the income generated through heritage tourism back into heritage management.

The project, in close collaboration with the Provincial authorities, established a Provincial Heritage Fund to collect part of the income generated through tourism which can be tapped into to finance site management and therefore ensure the sustainability of heritage management operations.

World Heritage nomination of the Plain of Jars Archaeological Landscape

Members of the Steering Committee include:

Members of the Subcommittee include: