Journalism that Builds Bridges: UNESCO and partners sponsor the launch of an 18-month project nurturing young citizen journalists in Thailand 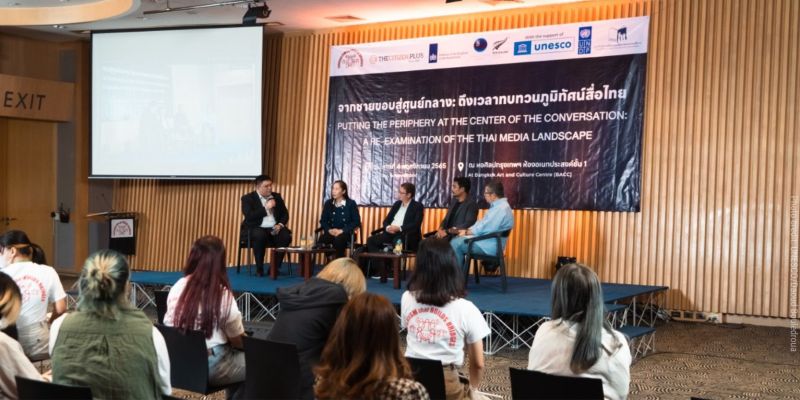 Journalism that Builds Bridges: UNESCO and partners sponsor the launch of an 18-month project nurturing young citizen journalists in Thailand

Media professionals gathered at the Bangkok Art and Culture Centre on 4 November 2022 for the launch of Journalism that Builds Bridges, an 18-month project jointly supported by UNESCO, the UNDP, and the Embassies of the Netherlands, Finland, and New Zealand. The Project aims to nurture a Thailand-wide grassroots network of some 50 young citizen journalists in an effort to foster media freedom and diversity.

Freedom of expression and democracy

No government need fear the press and the truth, so long as it has nothing to hide.
Ms Hathairat Phaholtap, Editor-in-Chief, The Isaan Record

Setting the stage for subsequent discussion, introductory remarks by distinguished speakers all converged on the centrality of freedom of expression and freedom of the press to a fully functioning democracy. Citing the Freedom House report, The Global Expansion of Authoritarian Rule, Dr Nirun Pitakwatchara, Chairperson of the Foundation for Isaan Education and Popular Media (FIEPM), pointed out that there have been 16 consecutive years of democratic decline globally from 2005 to 2021, with Thailand ranked among 60 countries that regressed in 2021 alone. In such a climate of diminishing democratic norms, the role of journalists in uncovering the truth and holding power to account becomes ever more urgent and challenging – sometimes even perilous.

In opening remarks, Mr Joe Hironaka, Chief of the Communication and Information Unit at UNESCO Bangkok, provided some sobering statistics. According to the UNESCO Observatory of Killed Journalists, 955 journalists worldwide have been murdered in the past decade, a rising proportion of which were female journalists. On average, 90 per cent of these murders have gone unpunished. Moreover, another survey by UNESCO revealed that 75 per cent of female journalists have encountered harassment and threats, both online and offline.

Despite such alarming figures, there are promising developments. Noting that he was speaking on the 10th anniversary of the UN Plan of Action on the Safety of Journalists and the Issue of Impunity, Mr Hironaka shared with the event’s attendees that impunity for crimes against journalists has either decreased or remained the same every year since the UN Plan of Action was adopted in 2012. During the past decade, at least 50 national protection mechanisms for journalists have been established, and UNESCO guidelines and professional toolkits have thus far been used to train over 24,000 judicial actors and 11,500 law enforcement and security officials worldwide on issues related to freedom of expression and the safety of journalists.

Turning to Thailand, H.E. Mr Remco van Wijngaarden, Ambassador of the Netherlands, noted that a controversial draft bill on media ethics and professional standards has temporarily been put on hold in parliament, and that during the UN’s 3rd Universal Periodic Review (UPR) Cycle, held in Geneva in November 2021, the Thai government affirmed its commitment to promote and protect freedom of expression and media freedom.

Challenges and opportunities for the Thai media sector

Drawing on her own research for her comments, Assistant Professor Dr Phansasiri Kularb, of the Faculty of Communication Arts of Chulalongkorn University, offered insights into the current and future challenges and opportunities facing Thailand’s media sector. She shared the key observation that mainstream media tends to favour event-oriented reporting and generally reflects the viewpoint of the state and of the country’s political, social, and economic elites. Moreover, gender disparity within the Thai journalism industry itself may affect the newsroom culture, as well as the selection of sources of information and the perspective from which news content is covered. According to Dr Phansasiri, a general lack of sensitivity to gender equality and diversity currently persists throughout the industry.

As for what is regarded as newsworthy content, in an environment of intense competition for ad revenue, most Thai media seek to maximize reach and revenue potential by prioritizing human-interest stories, some of which may be sensationalized for dramatic appeal or even socially harmful in their actual impact. Such an emphasis on a news item’s appeal factor over its substance is fundamentally antithetical to thoughtful, in-depth investigative journalism, which is comparatively costly and time-consuming to produce. In addition, there is a risk that, when attempted, investigative journalism in the Thai context may provoke ‘Strategic Lawsuits Against Public Participation’ (SLAPPs). And as Mr Panu Wongcha-um, President of the Foreign Correspondents’ Club of Thailand, pointed out, violation of defamation laws in Thailand is considered a criminal offence, making journalists and their media organizations understandably hesitant to undertake investigative reporting.

Although the rise of independent journalism, regional journalism and citizen journalism in Thailand offers promise for a plurality of voices to be heard, there are significant challenges as well. As recounted in a video presentation by the event organizers, Citizen+ and FIEPM, today’s independent journalists tend to work under precarious conditions with limited access to professional resources. They often need to rely heavily on online platforms to disseminate news content. The video further makes the point that there are distinct drawbacks to relying on multinational platforms, such as Facebook and YouTube, as substitutes for traditional mainstream media venues, in that they are for-profit businesses that must comply with local laws wherever they are allowed to operate. As such, these media platforms may be under pressure to block certain content deemed subversive by the local government or related authorities.

There is nothing scary about journalistic work. The truth must be told…
if people find our work irrelevant, that would be scarier.
Mr Teerapon Anmai, Faculty of Liberal Arts, Ubon Ratchathani University

Perhaps the crucial challenge for the overall Thai media industry is that, even when well-rounded and insightful content is produced – whether in traditional or non-traditional media – ultimately it may not receive much interest from the general public. For instance, as Dr Phansasiri remarked, the widespread popularity of social media in Thailand mainly reflects the public’s desire to be entertained rather than to be well-informed. As Mr Nattaravut Muangsuk, of the non-profit Thai Media for Democracy Alliance (DemAll), asked, ‘How do we get people to develop a taste for more diverse media consumption?’

Media literacy is one of the cornerstones of meaningful civic engagement in democratic societies. In this regard, H.E. Mr Jyri Järviaho, Ambassador of Finland, underscored the value of media literacy for all. Addressing the audience of young aspiring Thai journalists, he stated, ‘You, as young people in the media field, are in a good position to learn media reading skills, and to transfer those skills to your communities.’ In keeping with Mr Järviaho’s sentiments, all panelists emphasized that any constructive path forward must involve an element of citizen-centered journalism.

Mr Somkiat Juntursima, Director of Public Engagement and Development Partnership at Thai PBS, offered the insight that citizens nowadays are taking on multiple roles as consumers, creators, disseminators, and ultimate arbiters of information. Obviously, such power comes with responsibilities. Mr Mongkol Bangprapa, President of the Thai Journalists Association, responded that ‘it is essential that citizens be critically aware of what is happening’ in their society. Although everyone might agree that journalism should be impartial, technological disruption means that the media can be used just as readily to express personal opinions over facts, thus sowing social division. In this challenging context, Mr Mongkol stressed that the willingness to listen to one another without prejudice must serve as the basis for rational discourse, instead of resorting to invective or litigation. All panelists agreed that there must be a safe space for diverse viewpoints to be discussed and debated.

‘Thailand is not just Bangkok’: decentralization and diversity

The growth of alternative media and civic organizations in Thailand is providing much-needed space for a plurality of voices to be represented. Mr Teerapon Anmai’s dictum, ‘Thailand is not just Bangkok’ served as a rallying cry for other panelists discussing the need to build bridges and to ensure that each region is heard on its own terms.

Drawing on her experience as a former news anchor at Thairath TV, Ms Jomquan Lhaopett echoed Dr Phansasiri’s findings that mainstream Thai media mostly rely on state sources. She added that the mainstream media is not simply Bangkok-centric, it also tends to feature regional content in a superficial and distasteful way by opting only to cover bizarre or tragic regional stories. Ms Jomquan’s experience illustrates that it is not enough for the center to engage with the periphery: the quality of that engagement matters. Against this backdrop, Mr. Teerapon maintained that exposure to diverse voices is what fosters empathy and lessens the inclination towards stereotypical notions and judgments. In fact, there is great diversity in Thailand, both within and between regions. As editor of Louder, Mr Teerapon wanted to turn up the volume on underrepresented voices, whether of the unglamorous farmer, of the flood victims in Ubon Ratchatani, or of the youths who belong to the Khmer ethnic group as well as the LGBTQ+ community. In a similar vein, Mr Ruslan Musor, Editor-in-Chief of Wartani, asserted that, had the people in the three southern provinces of Thailand been given the space to express themselves freely rather than being labelled as “Southern Bandits”, violence would not have erupted.

Though hailing from diverse regions, journalists from the periphery essentially face different manifestations of similar issues. To broaden the perspective, Dr Samatcha Nilaphatama, of the Faculty of Communication Sciences of Prince of Songkla University, observed that the terms ‘center’ and ‘periphery’ draw upon the world-systems analysis of the sociologist Immanuel Wallerstein, and connote the extractive relationship between the metropolitan center and the less developed periphery. By putting the periphery at the center of the conversation, the launch of the Journalism that Builds Bridges project aimed to redress this asymmetrical relationship by demonstrating that journalists from the periphery can build bridges, create resilient networks, and work towards common goals for a more pluralistic and equitable future.