Introducing children to documentary heritage: Let’s Explore the Memory of the World 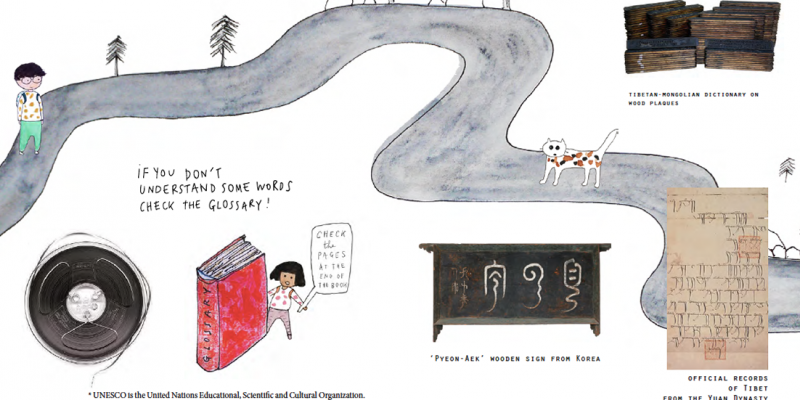 Introducing children to documentary heritage: Let’s Explore the Memory of the World

Children living in the digital age exchange news and knowledge with the external world at an unprecedented speed and volume. As increasingly diverse media provide educational platforms and resources to the young generation, UNESCO continues to develop reading materials for children which are open to access, and helpful to form their cognitions of mutual understanding and peaceful coexistence.

This book comprises written and illustrated descriptions as well as carefully compiled information and photographs about the Memory of the World’s missions and inscriptions. This includes a visually rich sequence of collections from the Asia-Pacific region and also some of the Memory of the World’s most popular international inscriptions. The three main characters depicted in the narrative make interesting discoveries and gradually collect their stories as part of their exploration, driven by their quest for wisdom, knowledge and peace.

Beyond this, the book highlights important themes embedded in documentary heritage such as languages, religions, geography, gender equality, mutual understanding and human rights among others issues. The last section includes creative exercises to encourage young readers to help in archiving and collecting documentary heritage, and explain the selection, preservation and access processes.

Supported by Asia Culture Center and Asia Culture Institute in Gwangju, Republic of Korea, the printed books were distributed to the MoW National Committees in Asia and the Pacific, the custodians of inscriptions listed in the book and to the network of UNESCO Associated Schools in the region.