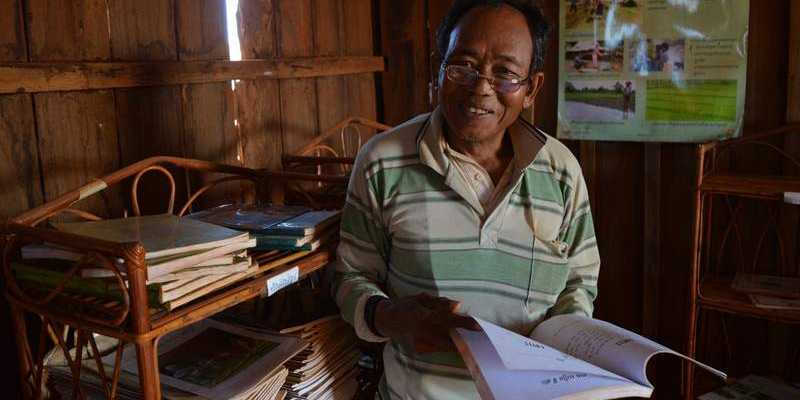 Ting Sain was working as a policeman in 1994 when he stepped on a landmine that tore off one of his legs.

Up until the horrific accident, the native Tampuan speaker had no education and was unable to read or write Khmer. “I couldn’t go to school because there was no school or teachers in my village,” says Ting Sain, now 60.

After the injury, he was reassigned to office work where he took the opportunity to educate himself, learning Khmer by using a typewriter and later being trained as a teacher in mother tongue-based multilingual education (MTB-MLE) by CARE Cambodia.

The Tampuan language is one of 24 ethnic minority languages in Cambodia apart from the majority language of Khmer, with most speakers living in the mountainous southern and western portions of Ratanakiri province.

Cambodia is a regional success story in terms of mainstreaming MTB-MLE in its education system – next month the country will launch its Multilingual Education National Action Plan. MENAP is a five year action plan on implementing multilingual education and strengthening the MLE model in the country, with the aim of expanding into new languages.

However, when Ting Sain was introduced to the CARE program, there were fewer such initiatives. The program appealed to him in part because of the possibilities he believed it would open up for fellow Tampuan.

When he was growing up, Ting Sain said that “no one could read or write Khmer in his community,” making an approach that could bridge early education in the mother tongue with later education in Khmer appealing.

“It is very important for children who can’t speak Khmer here, to learn to read and write in their mother tongue first. It’s easier for children to learn this way,” he says. “If some of them are having difficulties with the Khmer, I can explain to them in Tampuan.”

Given that there are only an estimated 31,000 Tampuan in Cambodia, there is also a pressing need to ensure that the traditions of the ethnic group survive.

“It’s also important for the children because it keeps the language and culture. They learn to read and write in their own language,” he says.

Speaking from experience, he rejects assertions that MTB-MLE impedes a child’s growth by focusing on native tongues rather than majority languages or those used in commerce.

“If someone says this to me I don’t believe them. Mother language education is very important to me and for the students to learn their own language as well as Khmer. It is very difficult to learn in another language. This way is much easier.”

As proof, Ting Sain recounts the stories of student successes  and he doesn’t need to look far for these – two of the other three teachers at his school are former students, while others have gone on to study in the provincial capital.

“I’m very happy to share my knowledge and see students get a good job,” he said. “People in the village can now read and write in our own language and Khmer. Without the school and mother tongue-based multilingual education, everyone would have just continued working on the farm.

“Before CARE started work in this village, most people couldn’t speak Khmer. Now it is very different.”

UNESCO Bangkok would like to thank CARE Cambodia for support on this story. CARE is a member of the Asia-Pacific Multilingual Education Working Group, a consortium of UN agencies, intergovernmental organizations and academics advocating on behalf of ethnolinguistic communities through multilingual education initiatives and related policy advocacy throughout Asia-Pacific.