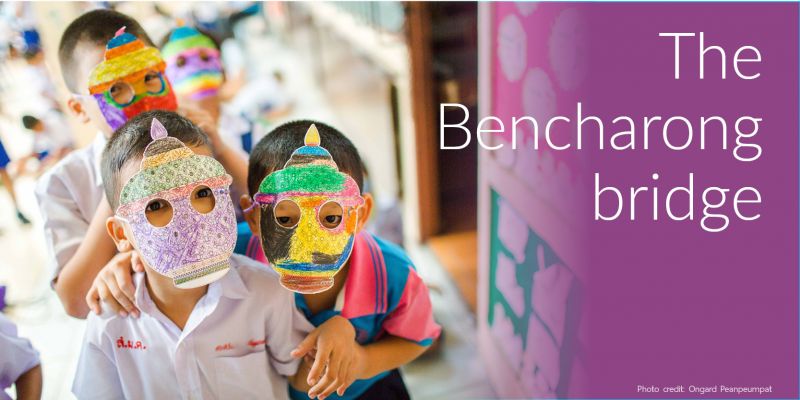 Known for its unique forms, prominent motifs and bright hues, Bencharong enamelled porcelain has been popularized as a “must-have” souvenir from Thailand. More than that, however, the craft of Bencharong is an example of intangible cultural heritage – practices, representations, expressions, knowledge and skills that local communities recognize as part of their identity and sense of belonging.

Bencharong and Lai Nam Thong, its sister art form, are the two main types of Sino-Thai ceramics, which historically were made in China for the Siamese court. The history of Bencharong dates back to the late Ming period in China, corresponding to Thailand’s Ayutthaya period circa 1720 AD. But it was during the Qing period – the Bangkok or Rattnakosin period of Thailand – that Bencharong was most prized by wealthier consumers, and became the most sought-after porcelain during the 18th and 19th centuries.

The Thai word “Bencharong” originates from Sanskrit, “panch” meaning five and “rong/ranga” meaning colour, suggesting the use of the five base colours of black, yellow, green, red and white. However, Bencharong today often features more variety as the original colours are mixed into different shades of brown, purple, orange and pink, with more than 30 colours now used to paint the ceramics.

Bencharong’s patterns and motifs are symbolic, reflecting a cultural fusion of India and China in Thai art. Western influences are also apparent in some wares as well as decorations inspired by nature, such as flowers and birds, and Buddhist motifs and Hindu mythological creatures, such as the Garuda and Naga.

Born to a Thai-Chinese family who owns antique shop, I was exposed to Chinese and Thai art starting at a very young age. One day, I accidentally dropped a soup bowl and, to the utter shock of my entire family, that accident came with a 200,000-baht price tag. I recognized that the bowl, as well as our other kitchenware, tea sets and garden stools, were not ordinary porcelain, but all were forms of Bencharong and Lai Nam Thong ceramics.

At the time, I realized that I had been living surrounded by one of Thailand’s most notable art forms for my whole life, yet I had been unaware of the cultural significance. I believe that other children who have not been exposed to this aspect of our culture could also lack awareness about the cultural and artistic value of Bencharong, which might result in the art form disappearing in the future.

Motivated by that realization, I recently completed a pilot programme called “Bencharong Spanning the Generations” at Samakee Songkrau School in Bangkok’s Khlong Toei district, where I taught students Bencharong production and function. Leading more than 500 young students over several weeks, I guided the student body in interactive discussions on the wonders of Bencharong and its value.

The programme culminated in each student creating his or her own Benjarong replica. Younger students worked on Bencharong masks, which allowed them to expand their understanding of patterns and colour usage, while older students engaged in a Bencharong design activity in which they each drew and painted their own plates.

During the preparation and research for the course, I was also inspired by the artists and scholars that I encountered. One of Thailand’s best-known artists in the field, Sarranya Saisiri began learning to mould and paint Bencharong from her mother, father, uncle and grandfather at the family business in Samut Songkhram. In 2014, Ms Sarranya was recognized as “Craftsmanship Descendants of 2014” by the SUPPORT Arts and Crafts International Centre of Thailand.

“Not only does it demonstrate the intelligence of our ancestors, it also serves the purpose of an educational and aesthetic resource,” she said, adding that it was important for contemporary artists to emulate traditional patterns. Her family’s business is known for its use of mixed colours and traditional patterns from the period of Ayutthaya and King Rama V, notably delicate Thep Phanom with Norasingha and Chakri patterns, and clientele include members of the Royal Family.

In the context of the school training, the relationship between most teenagers and art history is still quite distant, said Prof Dr Podjanok Kanjanajuntorn, a lecturer at Thammasat University’s Faculty of Sociology and Anthropology. The “conventional” way of teaching art history, Dr Podjanok added, largely focused on bodies of knowledge in isolation from their surroundings, which gives the impression to students that they are learning something “ancient”, “boring” and “uninspiring”.

“We have the resources: museums, research centres, and cultural heritage sites, it’s just that we don’t make best use of them,” she said. “For example, people don’t see the value of Bencharong crockery because the people who can buy it don’t really use it, and the people who could really use it cannot afford it.” Dr Podjanok added that Bencharong is only seen as high-end decorative art, mostly studied in pictures and books while its functionality continued to be overlooked. Moreover, the complex and expensive process of producing Bencharong are factors in the declining interest.

Cost was also a factor in planning my programme at Samakee Songkrau School. From my community and with assistance from the souvenir story Boonyarat Benjarong, we were able to bring painting techniques, gold-filled hypodermic syringes, small-bristle paint brushes and traditional motifs to teach students artistic techniques as well as the relevance of preserving culture and heritage through the generations.

Not every school in Bangkok, much less Thailand as a whole, can afford to take students to art exhibitions and museums, so why not bring small-scale exhibitions to them? Art education allows people to understand the interconnectivity of cultures as well as the wider world. And we know that young minds are the most influential agents of change. If adults say that they depend on the new generation to lead and innovate, then we should start by equipping ourselves with the knowledge to understand and appreciate the world around us first, so that we know what to change and what to keep.

“By actively engaging in hands-on experiences, one can sense the value of the past as a path towards understanding the present and the future,” said Dr Dawn F Rooney, author of “Bencharaong: Chinese Porcelain for Siam” and Southeast Asia historian. “Art education does not necessarily mean studying the art and replicating it. It means interpreting and looking at old art forms from a new perspective and integrating it into our lives.” Dr Rooney encourages young people to initiate art education projects, to travel to historic sites and to learn by engaging experts in history, art and architecture.

“One of the main challenges in safeguarding intangible heritage by communities is the loss of interest and enthusiasm to practise by the young generation,” said Montakarn Suvanatap, an Assistant Programme Officer for Culture at UNESCO Bangkok. “A ‘classic excuse’ for generation gaps has become a threat to both the valuable traditions and the beautiful community life. Indeed, many countries have started to realize the value of intangible heritage in achieving sustainable communities, and governments have made efforts to integrate local knowledge in formal education curricula. However, that is not enough if the children are not encouraged to go out and do it.”

UNESCO supports local initiatives to safeguard intangible cultural heritage, based on the belief that local communities, where traditional bearers and practitioners live in, are the true stewards of their own heritage. “UNESCO Convention for the Safeguarding of the Intangible Cultural Heritage”, launched in 2003, is the key international document that calls for full involvement and consent of communities against top-down decisions from national government on how living heritage should be protected and transmitted.

This pilot programme is meant to nurture young people’s curiosity in the Bencharong, in a model that I hope can be replicated at other schools. There is a need for education and artistic appreciation of Thai art forms that goes beyond just souvenirs. If we don’t start safeguarding knowledge of this heritage and cultivating young people’s interest, then who will?

By Puncharat Chaichanawanich, a junior at KIS International School. In addition to Bencharong antiquities, her interests include Thai-Chinese traditions, interpretive dance and film-making.