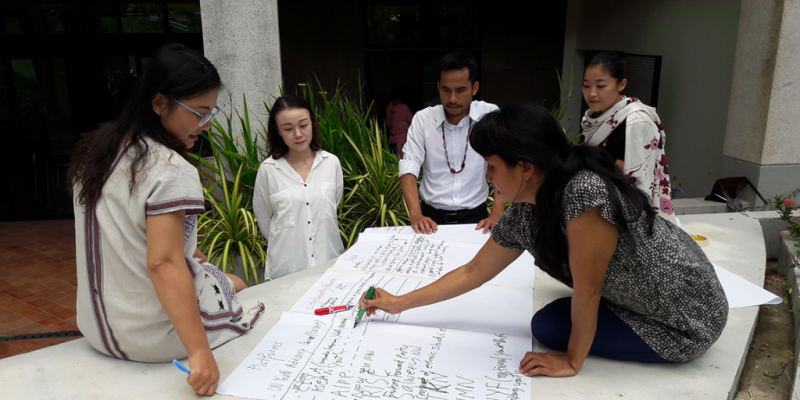 The young people sitting together in a classroom at Chiang Mai University came from countries across the region, yet they do not only identify as Cambodian, Lao, Myanmar, Thai or Vietnamese. Instead, this group of about 15 are defined as “indigenous youth”, representing ethnic minorities such as Karen, Akha, Bunong, Khmu, Arakhan, Hmong and several others. As indigenous persons, the feeling of being around strangers is not a new sensation for them, as they are often considered “strangers” within their own countries. However, despite their differences, they were brought together for one common reason: the very survival of their communities is being threatened.

As the day progressed, the young people’s presentations highlighted very serious challenges. The construction of hydro-power dams on the Mekong River, along with the establishment of national parks, have forced indigenous communities out of areas that they have called home for centuries. The education that indigenous children and youth receive promotes assimilation with the mainstream culture of their respective countries, leading to a sense that they are “backwards” compared with the majority population. The migration of young people away from their communities to big cities further weakens their connection to and continuity of the traditions and practices to which they were born. These are just a fraction of the challenges presented.

These young people were not randomly selected, but are activists in their respective countries where they empower indigenous youth through programmes focused on land rights, the environment, education, gender equality, health, media and other areas.  They were brought together by UNESCO Bangkok, the Asia Indigenous People’s Pact (AIPP) and Chiang Mai University to brainstorm solutions for addressing the challenges they face. But rather than being told what to do, they are instead being asked to create and lead an “indigenous youth think tank” that will attempt to empower youth in their countries.

It is a common dilemma faced by those of us working for UN agencies and NGOs alike: programmes focused on helping youth often fall short of their intended goals. There are several reasons why. Sometimes, there is a lack of funding or political will from programme leaders or donors.  However, it is more often the case that we have a poor understanding of their target participants and how to actually work with them.

While we as development agencies try our best to address the concerns of young people, we often engage in approaches that fall short of that goal. This has been evident in numerous youth forums and events that have taken place globally. These events are typically very good at bringing together some of the most gifted young minds in the world, but they do not always result in meaningful follow-up actions or impacts. When trying to address the needs of vulnerable youth (such as those who are indigenous), this is an even more difficult challenge.

In defence of organizations working on youth issues, engaging young people can be a huge challenge, and with limited knowledge and funding, it can seem nearly impossible.  But this apparent impossibility and the perceived need for large sums of money are myths. The indigenous youth attending the meeting in Chiang Mai are a fraction of the hundreds of thousands of youth all over the Asia-Pacific who take part in organizations and activities focused on achieving the Sustainable Development Goals (SDGs).

Leaders of these organizations carry with them knowledge of their communities and an extensive network of passionate activists representing youth of all backgrounds. Each of them provides key insights into the real problems affecting their communities, what solutions work, and what do not.

Considering those assets, rather than create programmes and events, and then invite young leaders to attend, why not engage them from the very beginning? Why not include them at every stage – from programme design to implementation? Why not tap into their extensive knowledge of the issues affecting their communities and work with them to come up with appropriate activities and strategies? Finally, if young leaders do not have the skills to contribute to programme design and implementation, then why not use the funds that have been allocated for big events for training instead?

The meeting at Chiang Mai University reflected just such a youth-orientated approach from the outset. Guided by the approach of involving young people in the development of youth programmes, UNESCO Bangkok and AIPP are re-examining the way youth programs are often developed and implemented and attempting to overcome challenges faced by their fellow agencies and organizations in light of these questions.

We often say “youth are the future”, so why not give them a say in their future? Indigenous youth, along with many other youth sub-populations, are actively working to better the lives of their peers. Instead of telling them to take part in a future that we think is best for them, have them decide what actions are best for the improvement and empowerment of their own communities.