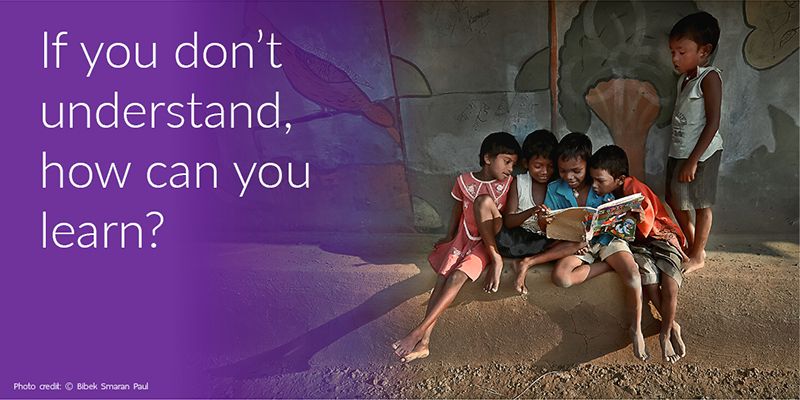 If you don’t understand, how can you learn? Worldwide more than 750 million people lack basic literacy skills. Many have never had a chance to attend school, but many others have sat long hours in a classroom listening to a teacher who speaks a language that is unintelligible to them, with little accomplished for their efforts.

Despite being a fundamental human right, significant challenges remain in ensuring the benefits of literacy reach all levels of society. One such challenge is language. Although we live in a world where two-thirds of children grow up in multilingual contexts, education systems often do not reflect this reality, instead functioning as monolingual environments. When schools overlook the multilinguistic nature of our society, children are the ones who suffer – they are pushed to the margins or forced completely out of a system that does not recognize their linguistic reality.

Children who do not speak the dominant language face serious barriers to succeeding in school and life in general. It is simple: if you don’t understand, you can’t learn. Developing strong language and literacy skills early in life is critical for later development and achievement.

Globally, 40% of the population attend schools in which the language of instruction differs from their mother tongues. In Thailand alone, approximately 8.5% of population is made up of ethnic minorities who are affected by a lack of resources and opportunities in their mother tongues. Students who do not speak the dominant language are at a higher risk of dropping out of school or leaving without having learned much at all. Worse yet, they are denied the lifelong opportunities that strong language and literacy skills provide.

Thailand, like the rest of the Asia-Pacific region, is a culturally and linguistically diverse country with more than 70 spoken languages. Yet, these languages are often not found in classrooms, leaving children who speak non-dominant languages at a disadvantage.

While Thailand has been making great strides in terms of literacy rates, with a nearly 98% literacy among 15 to 24-year-olds as of 2015, the reality is that a number of learners, specifically ethnic minorities and migrant learners, are being left in the margins as they continue to sit in classrooms listening to lessons they don’t understand. According to the 2017/2018 Global Education Monitoring Report, while 99% of learners complete primary education, only 50% have a minimum proficiency level in reading by the end of lower secondary and 50% are not taught in the language spoken at home.

Yet there is hope for the future as many innovative Mother Tongue-Based Multilingual Education (MTB MLE) programmes exist within Thailand, the region and the world that affect literacy and language skills for millions of students previously denied this opportunity.

One promising example can be found in Northern and Western Thailand, where a 10-year MTB MLE programme concluded in 2017. This programme affected one Mon, one Pwo Karen and four Hmong-speaking schools and since its completion local level partnerships have been developed to sustain existing schools and expand MLE schools. There are currently nine MTB MLE schools active in Northern Thailand with 14 more preparing to open, which will deliver programming to four language groups: Hmong, Sgaw Karen, Lahu and Pwo Karen.

An innovative approach targeting mother-tongue literacy can be found in Northern Thailand affecting the Prai community. In order to overcome negative stereotypes and attitudes around their own language and identity, literacy programmes began in a community setting, influencing both parents and children. Thanks to the efforts of the programme, Prai students are not only performing better in schools, but also have more positive views on their language, culture and identities.

Migrant children in Thailand also face serious language barriers that affect their ability to develop literacy skills. As of 2018, there were between 300,000 and 400,000 migrant children living in Thailand who needed access to quality education and learning opportunities. A number of programmes target this vulnerable population, some of which focus on best practices to provide quality Thai as a second language, while others aim to provide basic literacy and numeracy skills through mobile learning and ICT devices. Such devices provide learning materials in multiple languages such as Thai, Karen and Burmese in order to target migrant, ethnic minority, stateless and marginalised children along the Thai-Myanmar border.

This month, The Inclusion Mobility and Multilingual Education Conference held in Bangkok, co-organised by UNESCO and the British Council, will explore how language is a foundation that enables people to achieve their full potential and contribute to the wider society. Let’s celebrate the progress made in innovative and inclusive programmes highlighting the linguistic diversity of our world. But we also recognise that there is more work to be done. In order to provide access to quality education for all, we need to not only be aware of – but also celebrate – the cultural and linguistic diversity found in the world around us.

By Brynn Acker, an intern with the Inclusive Quality Education section at UNESCO Bangkok.

* A version of this article was first published in Coconuts Bangkok