How to report on gender issues without dehumanizing others? 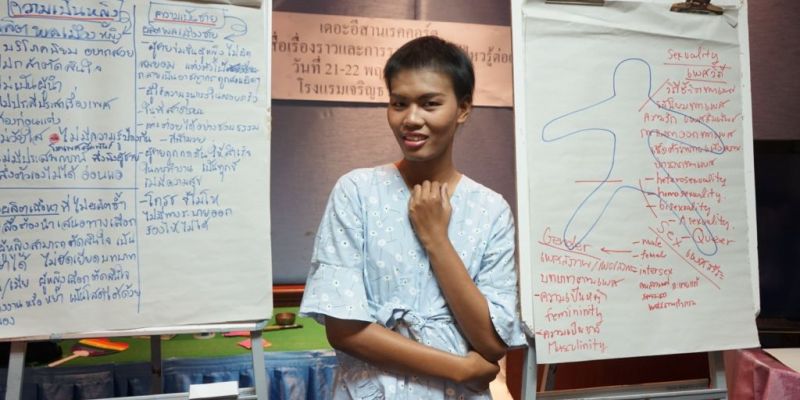 How to report on gender issues without dehumanizing others?

Published in Thai on isaanrecord.com on 25 November, 2018.

KHON KAEN - Many Thai media outlets have a proven record of using a wide array of colourful terms and expressions when reporting on cases of sexual abuse or stories involving people with different gender identities. But more often than not, these terms are sexually charged, derogatory and disrespectful towards the victims, women or those whose sexuality does not follow society’s mainstream.

At a training organized by The Isaan Record and UNESCO Bangkok on 21 - 22 November, 2018, journalists and media practitioners from across the Northeast learned about methods for gender-sensitive reporting and how to avoid gender-based stereotypes.

Dr Chanetti Tinnam, a lecturer of Mass Communications at the Faculty of Communication Arts, Chulalongkorn University, who led the training, said the Thai media often uses dehumanizing language when reporting on sexual abuse, harassment and cases involving people whose biological sex does not match their gender identity.

“It makes people unequal through the media’s use of language, for example, referring to people with different gender identities with animal names, like keng [barking deer], kwang [deer] or calling a woman chani [gibbon]," Dr Chanetti said.

"The media should not use these terms because they portray humans as objects or as animals, faeces or of low status. These words are still being used in reporting by the media, “ Dr Chanetti noted.

The issue is not specific to the Thai media landscape but extends to other countries in the Asia-Pacific region. According to a 2017 study by Burapha University the presentation of LGBTQI people in the region’s media is mostly negative and lacks an understanding of sexuality and the expression of gender identities. Media reports tend to generate prejudice and hatred that create the grounds for discrimination and human rights violation. People with different gender identities often find themselves pushed to the margins of society through media reports, the study concluded.

Media outlet often focus on stories with sexual elements because editors think the audience is always interested in sex, which leads to good ratings. This is because sex is a familiar issue and everyone can relate based on their own sexual orientation, Dr Chanetti noted.

But the media’s interest in sexual issues often leads to errors in the news-making process or content production in sexual dimensions. News reporters or producers see sex as a product to be used in the media business for sale in the capitalist system in order to get good ratings, followers, likes and shares on social media.

"Many news reporters still only focus on sex as the main topic in the media business for distribution in the capitalist system. It does not matter how the source or the victims are affected by sexual violence [that the media reports on],” Dr Chanetti said.

Dr Chanetti takes a critical view of the fixation on sex in the media’s content production especially in regard to reports about sexual abuse and harassment. Sexually charged language is often disrespectful to the victims and their families and friends.

She calls on media workers and reporters to broaden their understanding and perspectives about gender issues and sexual abuse. The media should be more sensitive in protecting the victims.

"If the media works without seriously taking gender dimensions into consideration, the people affected by sexual violence, those sexually oppressed and abused might become victims all over again,” Dr Chanetti said. “Finally, society might discriminate against and push them out of public life. It’s similar to cases where society does not accept the different sexual orientations of people and gender diversity.”

UNESCO’s Gender-Sensitive Indicators for Media (2012) indicate that the media should reflect diversity in society because social diversity embodies a variety of complex characteristics of the human population such as language, culture, religion, race, ethnicity and gender.

For the media to accurately mirror their societies and produce coverage that is complete and diverse, it is critical that the news in particular reflects the world in a way that goes deeper than a male-centric and stereotypical perspective.

It is critical that the news reflects the world as seen through the eyes of women as well as men. All journalists, male and female, can help to change attitudes by portraying women as they really are rather than re-enforcing gender-based stereotypes.

Media should work against the myth of gender in Thai society

Thai society has high expectations that male and female populations must follow an established set of sexual morals, a point which Dr Chanetti views as a misguided myth that is difficult to remove from the minds of people in society.

"Women and men must have a good sexual morals but [in reality] this is only expected of women,” Dr Chanetti said. “This makes women having to bear the expectations of society which causes them suffering and prevent them from enjoying real freedom."

The media perpetuates certain myths about being a good woman in Thai society such the  stereotypes that women must have a family and should not divorce their husbands. If divorced, they must maintain the mother role and continue the duty of raising children. This myth has continuously transmitted through TV dramas, movies and advertisements until today.

"The myth of a good woman according to social ideals actually causes women to suffer from the society’s expectations. It prevents them from leaving these framework and beliefs behind,” Dr Chanetti said.

Dr Chanetti added that social expectations of masculinity and femininity create discontent for both men and women. She sees the emergence of the LGBTIQ community  in Thailand also as a response to these rigid gender identities. The members dare to break connections, rules and social expectations. Media workers should understand the context of gender issues in order to be able to produce balanced and respectful stories that advance gender equality in society.

Phongsathon Promkowat from the ThaiPBS Public Network Office, who participated in the workshop, said it helped him to increase his awareness of gender issues in media reporting. He learned how to improve his interviewing style, how to use appropriate words and language to talk to news sources affected by sexual harassment. He said that is important to take on a gender-sensitive approach in order to prevent victims from repeatedly feeling sexually harassed.

"From now on, I have to be mindful and always be careful about how to use words and language, how to conduct and place myself when going to get news or interviewing sources that are affected by sexual harassment or news sources that are gender sensitive,” Phongsathon said.

This activity is supported by UNESCO Bangkok’s ‘Women Make the News Thailand’ project. As a result The Isaan Record updated their editorial policy to include Diversity and Gender-sensitivity as one of their core editorial values.