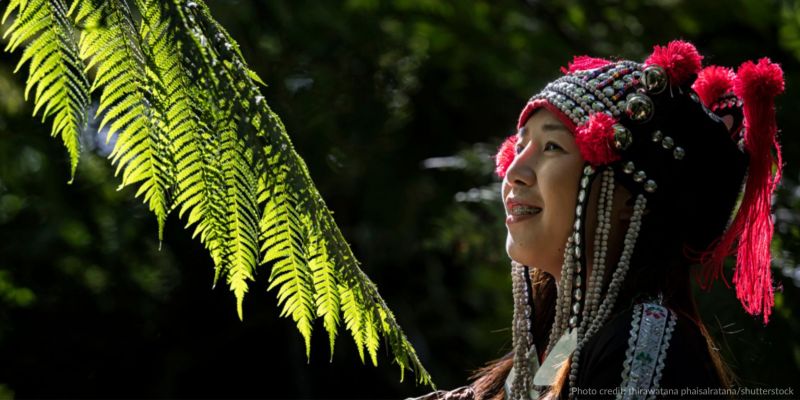 The first key initiative of HOP to be launched in early October aims to support Asia-Pacific indigenous youth in documenting and collecting traditional stories bearing themes of gender equality, peace-building, and sustainability in their local communities.

According to a recent count by UNICEF, there are roughly 2,300 languages spoken across Asia and the Pacific, making the region one of the most linguistically diverse globally. Many of these languages are indigenous, and therefore they serve not only practical, day-to-day communications purposes; in addition, indigenous languages are repositories of social values, good civic behavior, and even what is often assumed a late twentieth-century invention: gender equality.

Siphone Phommathan, a schoolteacher in Luang Namtha, Lao PDR, recalls how as a child growing up in the indigenous village of Khmu, he was often told a story by his grandfather in the Khmu language:

Many years ago, in a Khmu village in northern Laos, a group of hunters gathered to kill a giant snake that had been threatening their community. After they had succeeded in their mission, they rejoiced by cutting up the snake and sharing it with everyone in their village, except for a widow who had been long ago shunned by many of the community. Some days after the communal feast, the village faced a massive disaster. As it turned out, the only person who survived the calamity was the very widow who had not been invited to join her neighbors in eating the snake.

As Siphone reflects on the narrative’s underlying function, she notes that ‘this story shows that societal exclusion can create conflict…To build peace, one must include everyone, and everything needs to start from the local community’.

If this example suggests an indigenous story acting as a kind of cultural ‘fable’, others promote unique local cultures, customs, values, and histories reaching back thousands of years. It is regrettable, therefore, that of the world’s 6,700 languages, over 40 per cent are at risk of disappearing completely. Many of these endangered languages are indigenous. The loss of such languages ultimately means that the knowledge and histories of the people Siphone grew up with may also be lost.

From 3 to 5 October 2022, the first key activity under the auspices of HOP will be the ‘Regional Training on Story Collection, Youth Participatory Action Research (YPAR), and Youth Exchange’, in Bangkok. This training session will bring together over 23 indigenous youth, collectively representing 17 communities from 10 countries in the Asia-Pacific region: Bangladesh, Cambodia, India, Indonesia, Laos, Malaysia, Myanmar, Nepal, Philippines, Thailand, and Viet Nam. The Regional Training session fosters the development of youth-led research projects focusing on collecting and documenting traditional stories that advocate gender equality, peace, or sustainability. Upon the completion of this inaugural activity, youth participants will be supported to further conduct their research, and to create educational materials, campaigns, and other outputs from the stories that they have successfully recovered from obscurity.