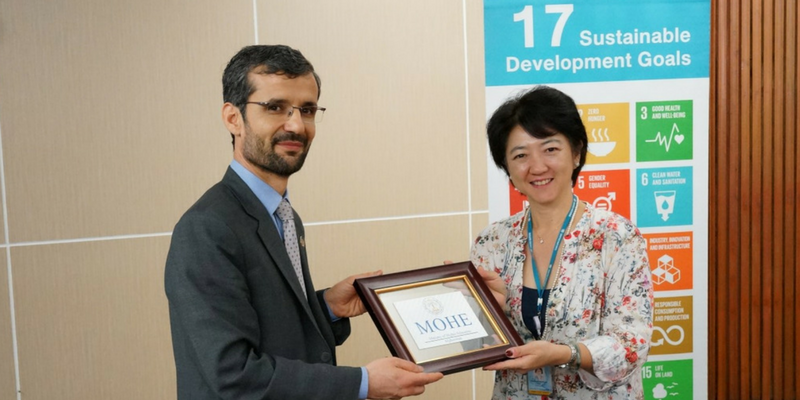 “Afghanistan once had a very good higher education system. With war and conflict, we have lost almost everything – the faculty members, the staff and the infrastructure,” said Mr. Abdul Tawab Balakarzai (above, left), Deputy Minister of Academic Affairs, Ministry of Higher Education, for the Islamic Republic of Afghanistan. “We're trying to recover the position we had and make Afghanistan a peaceful and stable country. In this respect, the support and collaboration of UNESCO is very much appreciated.”

Deputy Minister Balakarzai led a delegation of six senior Afghan education officials on a visit to UNESCO Bangkok on 13 February. Their visit was part of a week-long mission in Thailand that also included meetings with Thailand’s Ministry of Education, including the Office of the Higher Education Commission and several universities in the country to discuss student and scholar mobility and collaboration.

The current number of higher education institutions is adequate, he said. “We should think about quality now.”

To that end, the ministry has established six priorities for higher education. These include revising and updating curricula based on market needs and considering regional and international standards; creating an independent body to review quality assurance practices; capacity-building efforts for faculty members; reforming the now 35-year-old higher education system; expanding research and development efforts; and improving services available to students.

UNESCO Bangkok Director (a.i.) Maki Hayashikawa said UNESCO remains committed to working with Afghanistan to build on advances in the country’s higher education sector. She also noted the timeliness of the delegation’s visit, coming as it does shortly after the UNESCO Regional Convention on the Recognition of Qualifications in Higher Education in Asia-Pacific, also known as the Tokyo Convention, came into effect.

The Tokyo Convention, which came into force on 1 February, aims to make the recognition of higher education qualifications smoother and more transparent throughout Asia-Pacific.

Libing Wang, Senior Programme Specialist in Higher Education and head of UNESCO Bangkok’s Section for Educational Innovation and Skills Development, encouraged Afghanistan to begin the process towards ratification of the convention. At the core of the convention, he said, is the belief that recognition of qualifications should be based not solely on goodwill between countries, as is often the case, but on a common understanding of learning outcomes, and Afghanistan has valuable inputs to provide in that discussion.

“If learning outcomes can be harmonized, recognition can be very easy,” Dr Wang said. “Afghanistan can be part of the regional harmonization process.”

He also highlighted the promise of ICT in higher education in infrastructure-challenged Afghanistan, as well as the importance of information management systems, with UNESCO colleagues sharing in detail the potential for collaboration in these areas.

Dr Wang said Sustainable Development Goal 4.b, which calls on all countries to “substantially expand globally the number of scholarships available to developing countries … for enrolment in higher education”, is also important to address some of the capacity concerns raised by Mr Balakarzai. Scholarships, Dr Wang said, could be valuable in Afghanistan where nearly half of the country’s 6,000 faculty members do not have advanced degrees.

Mr Balakarzai welcomed the feedback and collaboration with UNESCO to advance his ministry’s goal of “making Afghanistan stable and peaceful through education”.