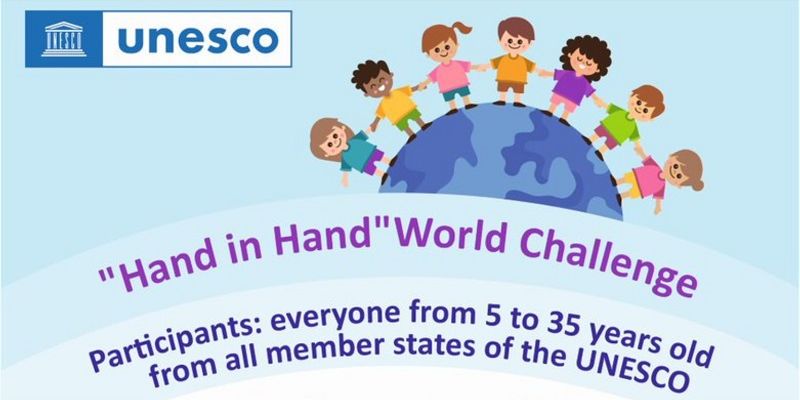 The Kazakhstan Federation of Clubs for UNESCO invites all Associations and Clubs for UNESCO to take part in the global challenge #HandInHandUnityChallenge, the idea of which demonstrates the dialogue and harmony of the whole world through a video challenge acting as a symbol of unification.

Everyone from 5 to 35 years old can become participants of the video challenge, demonstrating holding hands. Holding hands is a symbol of care, trust, friendship, mutual understanding and good intentions towards each other.

To become a participant of the World Challenge, you should:

1) Make a video where everyone should stand in a line, circle or other position and take each other's hand. It is necessary to capture the process as one participant extends his hand, and the second one takes it.

2) At the end of the video, everyone is invited to wave their hands and participant(s) say the phrase in their native language "We stand for world peace together with Clubs for UNESCO."

Example of a correct video: https://disk.yandex.com/i/1mhnlSZQrlZn8Q

Each video of the participants of the "Hand in Hand" World Challenge will be published on the website and social networks of KazFUCA with #HandInHandUnityChallenge hashtag (https://unescoclubs.kz/, https://www.instagram.com/unescoclubskz/).

All videos will be assembled into one large video and sent to the UNESCO Headquarters in Paris, as part of the celebration of the 75th anniversary of the Associations and Clubs or UNESCO movement.

This video will be presented at the Gala concert of the International Festival "The Planet of ART 2022", the theme of which is the ideas of peace and harmony, which will be held on 23 July 2022 in Aktobe, Kazakhstan.