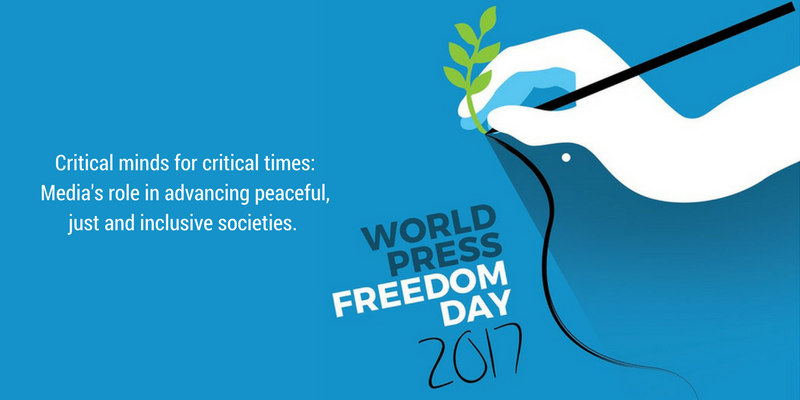 12 May 2017, Yangon – The symbolic celebration of the World Press Freedom Day organized by UNESCO Yangon Office and the Ministry of Information, was held for the sixth consecutive year on 03 May 2017 in Yangon. The joint commemorative event facilitated a dialogue between the Union Minister of Information and the media community in Myanmar, including the News Media Council, Myanmar Journalists Association, Myanmar Journalists Network, Myanmar Journalists Union, Burma News International and the Department of Journalism at the National Management Degree College. The event was well-attended by development partners, the diplomatic community and media stakeholders, including young journalists, students, faculty members of the Department of Journalism and Civil Society Organizations. The global theme of this year’s event was “Critical Minds for Critical Times: Media’s role in advancing peaceful, just and inclusive societies”. 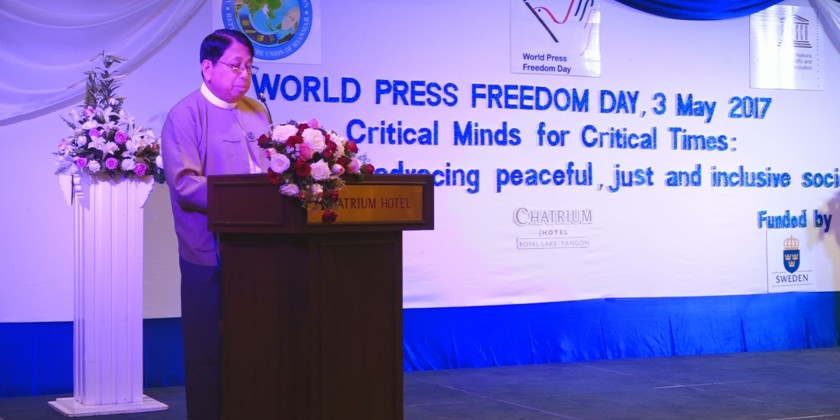 In his opening speech, the Union Minister for Information, H.E. Dr. Pe Myint, referred to global events that threaten peaceful development and acknowledged the important role of media in fostering more inclusive societies. He highlighted the achievements of Myanmar with regards to the most recent press freedom ranking by Paris-based Reporters Without Borders  (RSF). In this survey, Myanmar jumped 12 levels up, from 143 to 131, thus reaching No 3 among the ASEAN countries, behind Indonesia and the Philippines. However, H.E. Dr. Pe Myint emphasized, that “having achieved 131 out of 180 countries isn’t much to be proud about, but it is progress that we can be happy about”. Further, the minister explained that, “we will not be satisfied with this and will cooperate with local and international organizations to support the advancement of the freedom of journalists and media organizations”.

Ms Renata Dessallien, United Nations Resident and Humanitarian Coordinator, then read the UN Secretary General’s World Press Freedom Day 2017 message, which emphasized the central but perilous role of journalists: “Journalists go to the most dangerous places in the world to give voice to the voiceless”. Further, the statement called “for an end to all crackdowns against journalists – because a free press advances peace and justice for all. When we protect journalists, their words and pictures can change our world”. In addition to this official statement, Ms Dessallien acknowledged the specific achievements of Myanmar when it comes to freedom of the press, but pointed out that “there are still 130 countries ahead of Myanmar on the RSF-index” and hence a lot of work remains to be done.

The statement by UNESCO Director-General on World Press Freedom Day was delivered by Min Jeong Kim, Head of Office, UNESCO Myanmar. In line with this year’s theme, Ms Kim called on everyone “to sharpen their minds to defend the freedoms that are essential for justice and peace and ultimately for a thriving democracy”. With regards to the young democratic project in Myanmar, Ms Kim emphasized that “with the abolishment of prior censorship and the approval of the News Media Law among other media related laws, the country has achieved meaningful progress towards its democratic ideals by ensuring greater freedom of expression”. At the same time, she urged the government to continue the necessary reforms in line with international standards to guarantee freedom of expression and protect journalists.

The Head of the Embassy of Sweden Section Office in Yangon, Minister Counsellor Mr. Johan Hallenborg, followed up on this by acknowledging Myanmar’s improvement in the recent survey by RSF, stating that he is “very happy to have seen the progressive improvements of press freedom in Myanmar”. At the same time, Mr Hallenborg pointed out that journalists in Myanmar still face threats and intimidation: “In recent months two journalists have been killed in Myanmar. Additionally, the increased number of lawsuits against journalists and bloggers under section 66 (d) of the Telecommunications Law is a deeply worrying sign and a serious threat to freedom of expression and freedom of the press”. In addition, he highlighted the many threats that particularly female journalists face around the world: “They are intimidated and harassed not only for being journalists, but also on grounds of simply being women”.

Mr. Khaing Mrat Kyaw, Board Director of Burma News International (BNI), underlined the restrictions under which Myanmar journalists still have to work: “Although it can be said that the current media in Myanmar is free to a certain extent, the limitations and discrimination in gathering, publishing and disseminating the news are still occurring. Moreover, the safety of journalists is still a major concern in covering the news in conflict areas. It is true especially in ethnic areas.” He also outlined the exclusive control of media outlets, especially TV and radio channels, by business cronies.

Young journalists were also represented in the event by Ma Aye Sandar Aung, a third year journalism student from the National Management Degree College. She emphasized that “media must expose the injustice for the wellbeing of society. To uncover the injustice and reporting the truth, journalists must also have access to information in order to obtain balanced evidences”. She referred to herself and her classmates by stating that “we will dedicate ourselves to build a peaceful, just and inclusive society by delivering fair and accurate news with higher ethical standard for the media development”.

UNESCO is working closely with the Ministry of Information and local media stakeholders in supporting media reforms in Myanmar. UNESCO’s support includes capacity building, journalism education, advocacy, research and direct assistance to law-makers and the government in developing media related laws and policies.