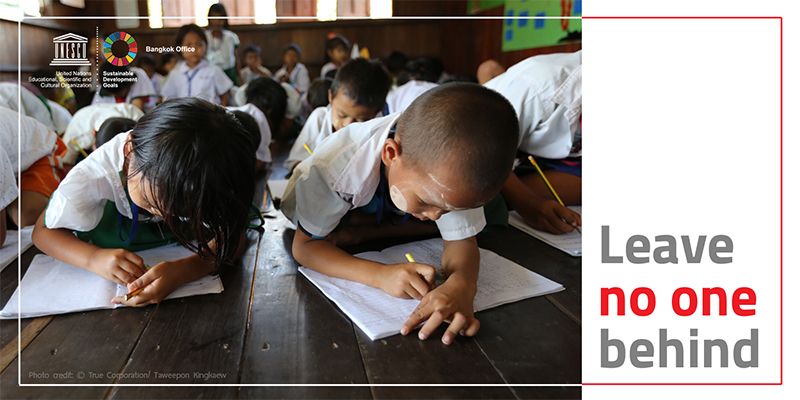 Thailand has been a major destination for migrants and refugees for decades, now with more than 164,000 migrant and non-Thai students enrolled in schools and learning centres across the country. That benchmark represents considerable progress, and yet with several million economic migrants in the country, there is little concrete data on the number of children still in need. In addition, like many countries in the region, Thailand continues to be affected by displacement because of conflicts both near and far – and more needs to be done regarding refugees’ right to education.

Many of these students are among the most vulnerable in our communities, the children of parents who have migrated because of conflict or economic privation, arriving in a country where many do not speak the dominant language and are deprived of the support structures that many of us take for granted. Without education, these children’s chances of breaking out of the cycle of poverty and disadvantage are vanishingly small.

In 2018, the scale of displacement and migration across the world is unprecedented in history. The headlines have been occupied by refugees fleeing conflict zones, including in our own region the humanitarian crisis precipitated by the forced relocation of Rohingya. The sheer number of people affected, however, includes not only people displaced by conflict, but also the massive movement, internally and across borders, of migrants motivated by a wide variety of reasons, including economic betterment and improved educational opportunities.

In that context, the Bangkok launch on 20 November of UNESCO’s Global Education Monitoring (GEM) Report, with the theme this year of ‘Migration, displacement and education: Building bridges, not walls’, could not be more timely. The editorially independent analysis of education worldwide is both a data repository to inform future policy and also a call to action to fulfill the universal obligation stated in Sustainable Development Goal 4: ‘Ensure inclusive and equitable quality education and promote lifelong learning opportunities for all.’

The Asia-Pacific is home to the most undocumented labour migrants as well as the largest group of refugees and displaced people of any region in the world. The challenges are monumental, with quality and inclusive education fundamental to assuring the health and well-being of people and our societies as a whole. It is also clear that these challenges can only be met through cooperation involving stakeholders at every level.

Thailand is committed to progressive policies championing migrant children, both documented and undocumented, which mandate access to education, healthcare and protection. The landmark 2005 Cabinet Resolution on Education for Unregistered Persons unequivocally states: ‘All children, regardless of their nationalities or legal status, have the right to 15 years of free basic education.’ It is a commitment that is improving the lives of an untold number of children.

We see the tangible benefits for migrant children and their communities on a regular basis. One example can be seen in Tak province along the Myanmar border, where more than 13,000 non-Thai students are enrolled in public schools, and another 12,000 migrant children attend migrant learning centres sponsored by NGOs. With the support of the Ministry and other partners, UNESCO has helped to implement a mobile literacy programme based on ICT to improve literacy skills, importantly by providing a multilingual platform and a language that the learners can actually understand.

Just as the GEM Report is global in scope, many of the education programme officers in Thailand have previously worked on similar projects in countries across the world. As one of my colleagues has stated: ‘I have worked in 10 countries, and I have never seen any that supports migrants and refugees like this.’

And yet, no one is under any illusion that the work is anywhere near complete. Problems still need to be addressed. As the GEM Report notes, Thailand is included among countries struggling to deal with refugees, notably stemming from Myanmar’s Rohingya crisis, but from other countries as well. The children of asylum seekers often do not have access to education, worsening the plight of people already on the brink through no fault of their own.

The distinction between refugees forced out of conflict zones and migrants must also be recognised.  For the latter category, barriers to access to education still persist despite Thailand’s progressive policy, stemming from negative stereotypes about migrants, a lack of capacity, misunderstandings of the policy on the part of officials as well as migrants, and even in some cases deliberate bias on the part of the education officials. Addressing these problems requires urgent action by government and policy-makers, hand in hand with the broad immigration reform in Thailand over the past two years, registering millions of migrant workers to better regulate industry and prevent human rights abuses. But these are also society-wide issues requiring redress at every level, including all of us regardless of our nationality, status or documentation.

Among the GEM Report’s recommendations is that Thailand sign new global compacts on refugees and migrants, recognising that education is a fundamental human right common to us all. At the regional level, the Regional Equivalency Framework under the ASEAN Declaration for Out of School Children adopted in 2016 needs to be further developed, which will connect basic education in the 10 ASEAN members to ensure access and the mobility of migrants. Frequent bilateral dialogue to enhance collaboration is essential, particularly to get support from countries of origin. And at the ground level, language support is vital to provide education in students’ mother tongue as a bridge to learning Thai, including more preparatory lessons and more native Thai speakers for advance lessons at migrant learning centres.

At heart, this must be a comprehensively collaborative effort. The Report is a vital opportunity, not just for Thailand but for the world, to recognise and revitalise our work in education to assure that refugee and migrant children are not left behind. We are defined by how we treat the most vulnerable among us, both in our own humanity and in our ability to build peace.