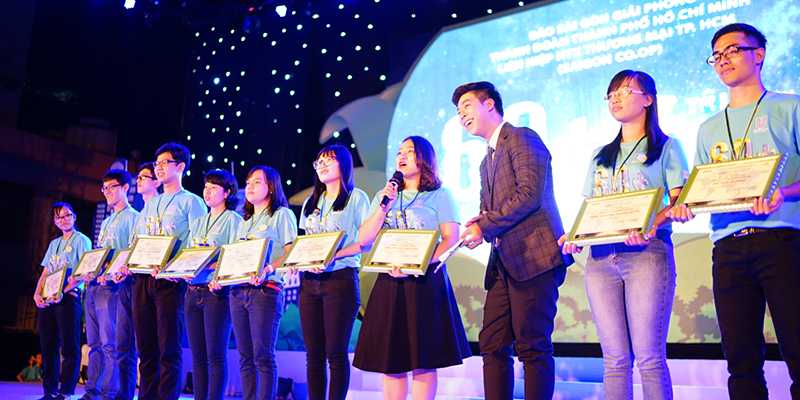 My biggest motivation is challenging myself in the many fields of communications. From journalism to digital communications, I have been developing my skills, enhancing my knowledge and nurturing a passion to address global issues and call attention to help resolve common problems. For me, sustainable development is the overarching priority, for us and future generations.

First, I have to explain how my career has led me to a better understanding of education for sustainable development (ESD). My journey on this path began six years ago with my first footsteps into journalism as the youngest person, at age 17, to win the Writing Development Plan Contest sponsored by Thanh Nien newspaper – Viet Nam’s leading daily. In that contest, in the hypothetical role as the newspaper’s Editor-in-Chief, I wrote a five-year development plan for Thanh Nien and presented it to the Editorial Board. Part of my project focused on how to make information friendly for audiences to spread news as far as possible, including about what young people really want to see in a newspaper and how it can inspire them.

In my subsequent work at the newspaper, I worked as a writer for the Youth, Sport and Cultural, & Entertainment Department, with duties including research, interviews, and writing and editing articles. I also supported my supervisor organizing content and editing articles by contributors.

In my last eight months at Thanh Nien, I focused on the Media Department, producing video clips and online programmes as well as applying new technology to media products.

The two most memorable achievements during my five years at Thanh Nien were being the youngest person to participate in developing concepts, style and information strategies for new projects under ‘Thanh Nien Mobile’, an application recognized by the Asian Digital Media Awards 2013. And in summer 2016, I directed the first online daily news programme for the Sport Department as Media Editor.

Those years helped to develop my writing, photography, website design and production skills, but also contributed to my general understanding of media and organizing coverage.

Since that time, I have worked as Head of Communications for the Earth Hour Vietnam campaign, managing communications not only to build and maintain partnerships with donors, but also to work with authorities, universities, environmental experts and media to improve our activities.

How to make an ESD difference

Over three years with Earth Hour, my central role has been to develop a strategic communications plan for seven environmental projects: replacing eco-friendly roofs for schools in the suburbs; urging motorists to turn off their engines when stopped at red lights for more than 20 seconds; organizing grassroots efforts, including a flash mob of more than 1,000 people calling for environmental protections; collecting and sorting garbage efforts; calling on 1,000 cafes in Ho Chi Minh City to pledge to save power; cycling around the city with banners calling for environmental protections; and, particularly, applying QR Code technology to provide environmental information to citizens.

In a 2016 campaign, ‘Green Destination’, we also created a signature project championing environmental protection in Ho Chi Minh City. Based on the insight that our city has many historical destinations, we realized it would be more effective if we combined tourism and environmental protection for citizens to become gradually more familiar with the concept of sustainable development and also to introduce more ‘green’ destinations for tourists.

The concept we created consists of two elements: first, we worked with a number of green tourism destinations to create new, unexpected attractions, such as sailing trips on a canal that had been the most polluted in the city before a complete renovation; and encouraged tourists to visit the city’s most green attractions.

Another initiative we organized was the ‘Big Night’ event, when we called for residents and businesses to shut down all non-essential lights to save electricity. A one-hour stoppage helped our country to save more than 500,000 kilowatts and billions of Vietnamese dong, equating to more than US$100,000.

Meeting bright and ambitious young people around the world has also been an exciting part of my developing journey. I have represented Viet Nam at the East Asia-Latin America Cooperation Youth Programme, the World Culture Forum in Bali and the World Village Conference in Indonesia, but more impactful regarding my ESD mindset and goals has been my participation in UNESCO events.

As a reporter at the Youth Newsroom Roundtable ‘Youth at the Heart of the 2030 Agenda: The Case for Space’​ in Bangkok in 2016, I learned about the different backgrounds and concepts of sustainable development in Asian countries. I was inspired by the ambitions of a Cambodian representative to maximize the rights of young people regarding politics; the profound life story of my wonderful gay Thai friend; and the serious but very on-point ideas of Korean representatives about young people’s development paths and the effect on society.

During my Training for Young Journalists on Reporting on climate change and sustainable development issues in Southeast Asia, I learned about not only journalism and digital training and went on a memorable field trip to a village near Cambodia’s capital Phnom Penh. At the village, I discovered a story about lost fields damaged by climate change, which changed the life of farmers in the area and their future generation. The trip helped me realize that climate change is not only a story, but an immediate threat if we do not act now.

In the future, I want to build on such experiences and my passion for information-driven campaigns. One idea is to pioneer another campaign with the theme ‘You live green, the planet lives well’, promoting actions to make yourself and the planet healthier. Such actions are meant to reduce the carbon footprint, from eating organic, planting seeds, trying out public transport and reducing meat consumption for a week.

More than that, I recognize that this is a global effort, and success rests in networks of young people working together to achieve sustainable development. I look forward to travelling to meet my international peers in the future, as we are indeed stronger together.