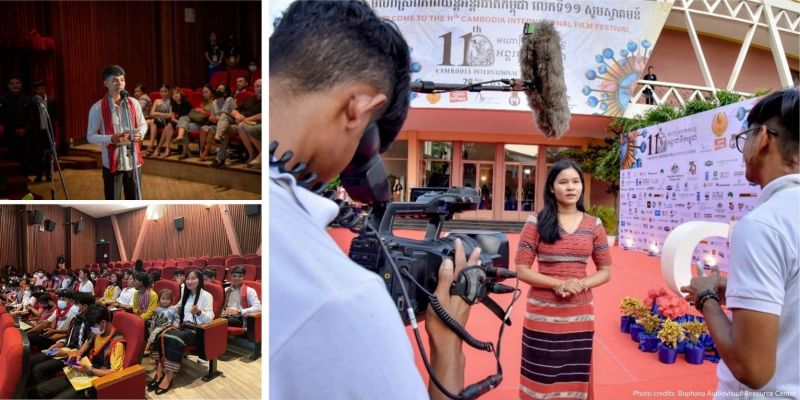 The prestigious 11th Cambodia International Film Festival (CIFF), which had its screening from 28 June through 3 July 2022, in Phnom Penh, opened this year with the documentary film A Tasty Drop, produced by 22-year-old Ramich Moeurn, a youth from the Tampuan indigenous community of Ratanakiri Province, Cambodia. During the opening ceremony at Chaktomuk Theatre in the capital, Moeurn introduced his film in his native Tampuan tongue, as well as in the country’s official language of Khmer, to Cambodia’s Minister of Culture and Fine Arts H.E. Phoeurng Sackona, before an audience of some 700 film enthusiasts.

Moeurn is one of 11 indigenous youth of Cambodia whose films documenting indigenous languages, cultures and stories were showcased throughout the Festival, three of which, including A Tasty Drop, were initially produced during the training programme ‘Build Capacity for Indigenous Youth and Create Indigenous Audiovisual Archives through Wiki Tools in Cambodia’, which was implemented by the Cambodia-based Bophana Audiovisual Resource Center and UNESCO Bangkok between 2021 and 2022 with the support of Wikimedia Foundation. In addition to A Tasty Drop, Bophana-UNESCO films featured at the Festival included indigenous women-produced films Sanoung, by 18-year-old Tampuan youth Seeyean Nhoch, whose film documents the preparation everyday indigenous foods, and My Wish, by 25-year-old Sinoun Kasol, from the Jarai indigenous community, which tells the story of Chamreth, a 39-year-old Jarai woman suffering from the consequences of marriage at an early age.

These films are among the 22 indigenous youth-made documentaries produced during the training Bophana-UNESCO programme, which led to the creation of the Bophana-UNESCO Indigenous Youth Collection, an open-access archive of audio-visual and photographic materials documenting youth trainees’ indigenous languages and culture, now available on Wikimedia Commons. Built using the indigenous youths’ new digital skills acquired during the training programme, the Collection was created to enhance the representation of indigenous peoples and languages within the realm of media content and in the public domains of culture and information.

Moeurn, Nhoch, and Kasol are among six indigenous youths supported by UNESCO to attend the film festival to foster indigenous participation in the Cambodian and international filmmaking communities. These activities further aim to contribute to the International Decade of Indigenous Languages 2022–2032 (IDIL2022–2032), a UN-wide initiative recently launched to support the preservation, safeguarding and revitalization of indigenous languages, the disappearance of which would represent an incalculable loss to the world’s collective heritage and memory.