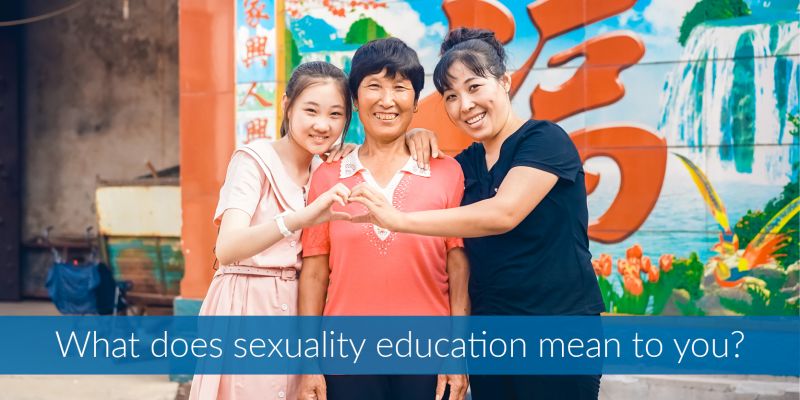 In 30 secondary schools across six provinces and municipalities in China, only half of students surveyed agreed that “girls should have a say as to who and when to marry”. Less than half disagreed that “a woman cannot refuse to have sex with her husband”, according to a study supported by UNESCO and UNFPA.

Likewise, only 10% of nearly 20,000 university students had received any sexuality education in primary school, according to a China Family Planning Association and the Public Health School of Peking University study in 2015. Several other studies have shown that young students, especially in rural communities, lack understanding about gender, violence, contraception, and early and unintended pregnancy, as well as low levels of knowledge about HIV.

The “Healthy China Initiatives (2019-2030)” recently launched by the Chinese government responds to such challenges and has incorporated new elements relevant to comprehensive sexuality education (CSE). The United Nations defines CSE as: “A curriculum-based process of teaching and learning about the cognitive, emotional, physical and social aspects of sexuality. It aims to equip children and young people with knowledge, skills, attitudes and values that will empower them to: realize their health, well-being and dignity; develop respectful social and sexual relationships; consider how their choices affect their own well-being and that of others; and, understand and ensure the protection of their rights throughout their lives.”

Complementing the launch, UNESCO recently hosted a policy dialogue in Beijing inviting UN agencies as well as health, education, civil society and government representatives as well as the media to discuss the new Global Education Monitoring report “Facing the facts: the case for comprehensive sexuality education”.

The topic resonates in the country. “Sexuality education that I received in middle school was limited to some basic knowledge about reproductive system covered in biology class and a brief, girls-only class meeting about menstruation,” said Ms Guo Yueping, a 21-year-old university student and active member of China Youth Network. “I remember two students who experienced unintended pregnancies who were expelled from school.”

The China Family Planning Association (CFPA) is helping address this gap by promoting peer education among young people. “In the beginning, we called it an adolescent health programme to avoid unnecessary opposition, but it is essentially sexuality education encompassing physiological, psychological, ethical and legal aspects,” said Ms Hong Ping, CFPA Commissioner. “Now it has become one of the top-10 branded government programmes that serve the grassroots communities.”

CSE is about more than just sex, said Ms Josephine Sauvarin, youth adviser for UNFPA. “A lack of understanding about gender equality, consent and rights leads to gender-based discrimination and violence, as well as early and unintended pregnancy, unsafe abortions, HIV and sexually transmitted infections, etc,” she added.

As the policy paper highlights, the implementation of CSE is hindered by social opposition because of misconceptions that it might be at odds with culture and operational barriers such as insufficient support for teachers and a lack of appropriate curricula and resources. This challenge remains despite a growing body of evidence about the positive effects of CSE.

“The slow progress in its implementation is due to both social perceptions and methodologies. Sexuality education is not just about sexual behaviour, but contains a broad range of topics,” said Senior Professor Gu Mingyuan, a member of National Education Consultative Committee.

Shenzhen is known as one of the few cities in China providing school-based sexuality education. Yet even there, “since 2008, due to the reform of compulsory education, most schools abolished their health education classes,” said Ms Zhang Ling, Deputy Head of Moral, Physical, Health and Arts Education of Shenzhen Education Bureau. “Now probably only 10% of schools are still maintaining that practice. Schools cannot afford class hours for this topic anymore, even though there are teachers who are self-motivated to do it.”

Effective change requires listening actively to parents’ concerns. Like many young people, Ms Guo said, she would have liked to discuss sexuality education with her parents when she was a teenager, but ended up talking to her peers instead because of the difficulty in breaking taboos about the subject.

On a relevant point, Ms Hong cited a CFPA survey from 2014 showing that 80% of parents felt unable to talk to children about sexual and reproductive health. With initial support from UNESCO, the CFPA conducts a programme to increase parents’ knowledge and boost their confidence and skills in communicating with their children about sexuality, gender and reproductive health. “Now this programme is being implemented in almost all provinces,” Ms Hong said. “It is so popular that in some places, parents have to wait in que for a training slot to be available.”

UNESCO launched the global campaign “Comprehensive sexuality education: A foundation for life and love” on World Aids Day 2018, with interviews featuring families from across the world, including China, about their experience and understandings of sexuality education.