Enter the World of the Nora Dance Drama 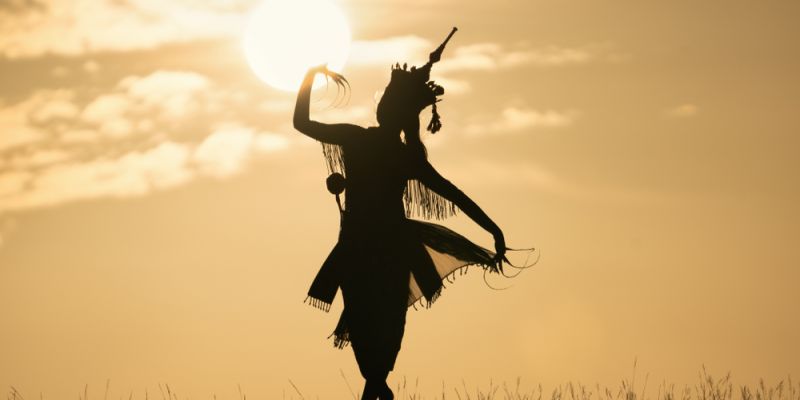 Enter the World of the Nora Dance Drama

An enchanting winged creature appears before you, and as she enjoys her surroundings, you can’t help but admire her colorful plumage and long talons.

Suddenly, a rope is thrown over her. You watch as the exquisite prey and her captor face one another, their struggle a powerful dance.

This is just one possibility of what you might see during the Thai dance performance known as Nora. When it comes to Thai dances, people tend to think of all-female dancers dressed in Thai silk outfits. But the time-honored art of Nora, intrinsically tied to southern Thailand, is no ordinary performance.

Nora is the local pet name for “Manorah.” Believed to be the country’s oldest dance drama, it is regularly featured at festivals, temple fairs, and auspicious occasions.

Nora performances are often based on Buddhist teachings and Thai literature, including the popular tale of two star-crossed lovers: the young prince Pra Suthon and Princess Manorah, a kinnari or mythological half-bird, half-woman. The kinnari costume is fantastical folk art at its finest, a multicolored, beaded costume (🇹🇭) consisting of several pieces, including long, curved fingernails as well as wings and a tail that complete the avian look.

Nora masters choreograph each performance, drawing on Nora’s 12 distinct mae tha or primary dance moves. They also design moves that suit the personalities of the apprentices they’ve selected to perform. Nora performers must train for years to build the strength, agility, and flexibility for precisely executing these dance moves, not to mention the acrobatics.

But there’s more to it than just physical movement. Nora performers also get to show off their creative wit with improvisational singing and poetry in the southern Thai dialect.

Other actors, easily spotted by their ordinary clothing and masks that identify them as hermits, hunters, or animals, may join the performances with their antics.

And then there’s the music. As the performers command the stage, an ensemble provides lively accompaniment, with instruments such as two-face drum sets, double gongs, cylindrical drums, cymbals, wooden clappers, and oboes heightening the dramatic performance.

Nora is not just an elaborate form of entertainment, though. It is a bridge to so much more.

The legend behind the legacy

Despite no official documentation on the exact origins of Nora, one widely accepted theory is that it was conceived in the ancient city of Wiang Klang Bang Kaew. The city is thought to have been located at what is now the temple of Wat Borommathat Chedi Kian Bang Kaew in Phatthalung Province.

Legend has it that Phranang Nualthong Samlee, the daughter of the ancient city’s ruler Phaya Sai Fah Fad and Mae Sri Mala, dreamt of a deity who showed her 12 dance poses. One day, the princess became pregnant after eating lotus pollen. Her father, infuriated by her sudden pregnancy and refusing to accept her lotus pollen explanation, banished her from the city.

While in exile, the princess taught her son the deity’s dance, and he grew to be a renowned dancer. Learning of his grandson, a repentant Phaya Sai Fah Fad called for his daughter’s return and bestowed his grandson with a crown and the title “Khun Sri Sattha.”

These four personages are the Khru Ton Nora or Nora ancestral masters. From them, a number of Nora lineages have sprung forth to carry on the tradition of Nora to this day. A whole Nora culture has evolved over time, a culture so rich and complex that so much can and has been reported on it in traditional and online media.

Take, for instance, the sacred Nora Rong Khru ritual. Nora family members near and far will gather for the ritual to reconnect and honor their heritage. During the Nora Rong Khru, which can last more than a day, the family members take part in various activities such as making offerings to their ancestors and communicating with the deceased through family members who have been selected to serve as spirit mediums.

Current Nora masters will also initiate new performers. These same masters are also believed to possess supernatural powers and family members who suffer from various ailments will ask for their help.

The Nora dance drama remains the main symbol of the Nora culture. Once only taught to male family members, it later became accessible to women to perform and to a wider audience to enjoy. Aside from retelling literary tales, Nora can also provide valuable lessons in dharma or Buddhist teachings. One Thai PBS docuseries describes how lyrics can be “tactfully riddled with” Buddhist teachings on how to lead a happy life. In addition to this, the performances may also touch on life’s struggles and social issues and even serve as a political critique.

Nora is so treasured in the Thai South that it is now part of the school curriculum. Teachers take great pride in helping their students build character through Nora, channeling their energy towards something constructive.

Though Thai southerners proudly claim Nora as their own, the folk art is no longer limited to just the South. Suan Sunandha Rajabhat University in Bangkok offers a Nora workshop, aiming to help attendees better understand and accept others by learning about this unique local culture, while Prince of Songkla University (🇹🇭) reports that Nora is well received throughout Southeast Asia. There’s even a bilingual Nora troupe that performs in the southernmost parts of Thailand and in the north of Malaysia.

A treasure for all of humanity

Pornrat Damrhung, a professor at the Department of Dramatic Arts, Faculty of Arts, Chulalongkorn University, supported Nora’s ICH application and was part of the team that produced the illustrated book, “Nora: A Living Dance Tradition of Southern Thailand,” to assist others in understanding this profound art and culture.

“We saw Nora as a rich and remarkable performing art that was grounded in diverse local communities of southern Thailand, but which had expanded into new social and cultural areas as part of an increasingly interconnected world.”     – Prof. Pornrat Damrhung

Dr. Duong Bich Hanh, UNESCO Bangkok’s Chief of Culture Unit, declared that heritage “is our legacy from the past, what we live with today and what we pass on to future generations. If we don’t care about it . . . the diversity of humanity will also be seriously affected.”

It’s not hard to understand why every Nora performer pours their heart and soul into each movement. If you get a chance to take a trip to Thailand’s beautiful South, don’t forget to add Wat Borommathat Chedi Kian Bang Kaew to the itinerary. Now the site of the first-ever monument to the four ancestral Nora masters, this temple is where it all began.

West-Virginia-born Sandra Sue Hanutsaha, or Sandy, has extensive experience in Thailand’s English-language media landscape, alternatively serving as a television and radio newscaster, emcee, moderator, interpreter, and translator. Her passion for English is why she’s had the opportunity to serve as a university communications director, language consultant, and part-time English instructor at universities and for exchange programs, and continues to tutor in English.