Engage the past through sound and images: Celebrating the 2019 World Day for Audiovisual Heritage 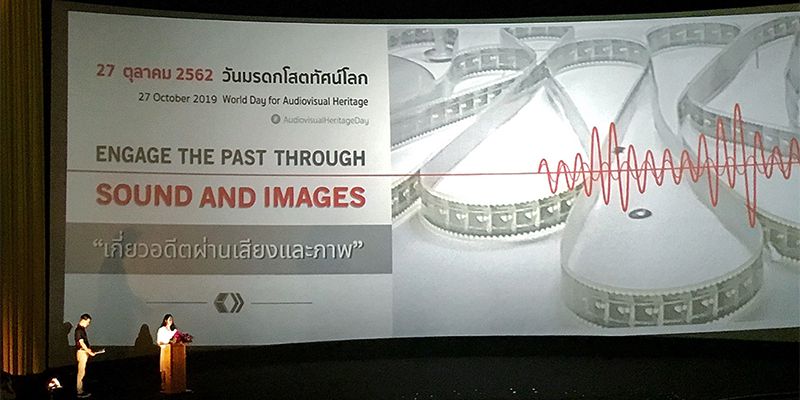 Engage the past through sound and images: Celebrating the 2019 World Day for Audiovisual Heritage

Audiovisual materials, such as film, video, audio and digital files, are important carriers for recording people’s collective memories and also precious resources for future generations to understand historical facts. Over the past few decades, we regrettably have witnessed losses of audiovisual collections around the world.

However, more archivists, librarians and caretakers have recognized and started to make efforts for preserving these valuable heritages that belong to all mankind. In order to celebrate their dedication and expertise, Thai Film Archive in collaboration with UNESCO Bangkok held a ceremony of World Day for Audiovisual Heritage at Scala Theatre, an historic cinema in downtown Bangkok on October 27, 2019.This year the theme of World Day for Audiovisual Heritage is “Engage the Past Through Sound and Images”.

“Moving image and sound recordings hold our memories, ideas and histories, yet many conditions are threatening the survival of them,” said Misako Ito, Adviser for Communication and Information of UNESCO Bangkok, at the event opening statement.

She explained that natural and artificial catastrophes keep reminding us that more skills, knowledge and resources are required to preserve audiovisual materials for future generations. “With the end goal of being able to provide these sounds and images to the audiences who will learn from them, engage with them, appreciate them and embrace them, our global efforts to share these materials is paramount,” Ms Ito emphasized at the end of her speech. 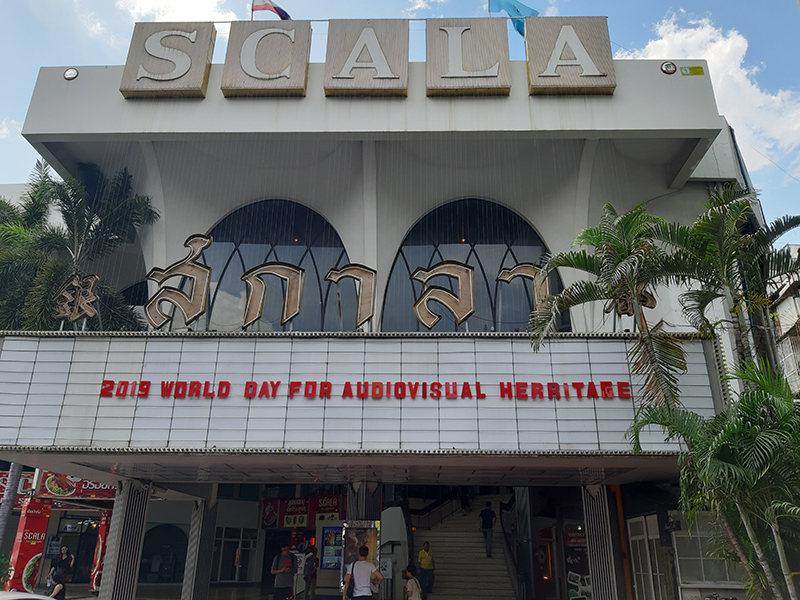 The opening was followed by the screening of the documentary “They Shall Not Grow Old”directed by Peter Jackson. Bringing into high-definition the human faces of the First World War, the movie does not simply incorporate original image data of WWI or reshoot historical scenes, but has reorganized footage from over 100 hours of war documentary and 600 hours of interviews filmed with 200 retired British troops, including colorizing their original black-and-white footage and adding sound effects. As the stories are being narrated from the perspective of each soldier, the audience are able to place themselves into the fierce combat and understand the misery of war.

The Thai Film Archive director Chalida Uabumrungjit said she appreciated the filmmaking method during a following panel discussion. She pointed out that the reprocessing of audiovisual materials with modern technologies not only ensured heritage was preserved in its original contents and formats, but also encouraged the younger generation to watch and learn from the past histories.

“The ‘immersive experience’ that the director Jackson pursues is leading the audience into real battlefield so they can experience the soldiers’ collective memories through various senses, which is meaningful for everyone to reflect on the war,” said art curator Gridthiya Gaweewong in another discussion.

The 2019 World Day for Audiovisual Heritage concluded with a ceremony, in which representatives from UNESCO Bangkok and Scala together unveiled a plaque marking Scala Theatre as an historic site in Thai Film History.