A story of two students and one outstanding teacher 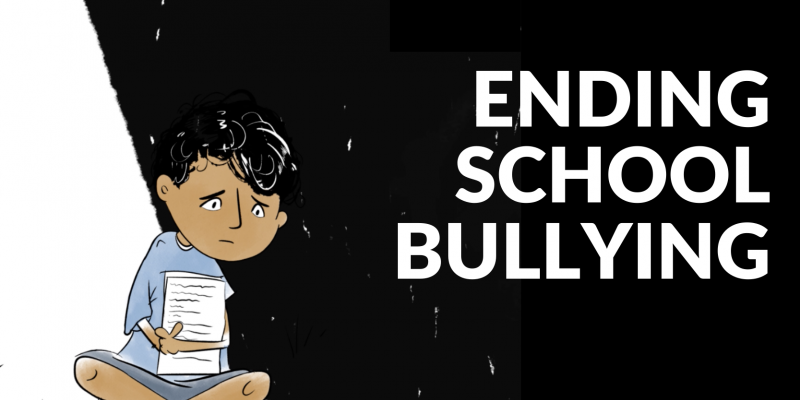 A story of two students and one outstanding teacher

After many years, Green can still clearly recall the first day when she was bullied.

"I remember it was drizzling that day. The sky was gray and seemed ready to tumble down at any time. This was a scene that a six or seven-year-old girl should be scared of. I wanted to let it go, let the sky fall."

It was her first year in school. Green had very short hair and looked like a skinny boy. Other girls would scream when she went to the school toilet, saying that she was a boy and should not enter the girl’s toilet. Shy as she was, she did not know how to defend herself and when things got worse, her classmates asked a teacher to intervene.

It was a male teacher, towering over Green like an iron tower. She trembled. The teacher scolded her, warning her that she had to use the boy’s toilet, otherwise he would call her parents. She was in tears, trying to explain that she was a girl, and they could check the student roster. But she just froze, not able to utter a single word.

As she grew up and went to a counsellor to address the trauma, she realized that she had been in a state of paralysis, a common reaction to conflict or danger know as the fight-flight-freeze response.

On that first day, she did not dare visit the toilet at all and refrained from drinking water. But still, at the end of the day, she could not help herself and peed her pants, wetting the floor beneath her. That few seconds seemed like a century. All she remembers is that many students saw and were laughed hilariously. It was her world, not the sky, that tumbled down that day.

Later, she tried to seek help from her class teacher, who did not seem to listen but told her to “look like a girl” and keep her hair longer. She did not take the advice, and the trauma accompanied her for the whole school year. Until the day she left her hometown to further her studies, she remembered the ridicule. “You are a freak.”

In a similar story, Ming also looked different from his male peers, with his hair covering his eyebrows, delicate facial features and two tiny dimples when he smiled. He spoke softly, not yet developing the deeper voice of his peers.

When he talks about his experiences being bullied in those “dark days”, he is not angry or displays a grievance, a calmness he credits to the support he received from his psychology teacher at the time.

Ming's "dark days" were when he left junior high and came to a new high school. Older boys idolized masculinity, flaunted their muscles, ran around the playground and skipped classes to play ball. Unathletic and quiet, not having a passion for sports, Ming did not seem to fit in. He wanted to be himself, but other boys would not leave him alone. They made fun of him by mimicking his voice and pinching his cheeks, and sometimes took his things without asking.

He went to his psychology teacher for help. Teacher Jing was a gentle and experienced teacher and former social worker, who is also one of the core teachers supported by the Gender Friendly Campus Fund. She first counselled Ming helping him to recognize a basic truth: “I am fine. I am just not accepted by others.” When Ming was absent for personal reasons, Jing conducted lessons teaching students about school bullying, about practicing empathy and how to avoid conflicts through effective communication. The students seemed to start reflecting on their behaviour and when Ming returned to school he sensed a different attitude and his classmates stopped making fun of him.

There is strong evidence that violence and bullying at school, including cyberbullying, can be prevented and effectively addressed. School communities and the broader education sector must work together to prevent and address bullying, through a whole-education approach spanning robust policy frameworks, training for school staff, systems for reporting bullying and providing support to those affected, and involving everyone in the school community, including parents, in prevention and response efforts.

As a partner of the Gender Friendly Campus Fund, UNESCO calls on all countries, organizations and people to come together with the common purpose of ensuring that schools are free from fear and violence, and to stand together against bullying at school. Every student should feel safe to learn, and to fulfil their right to education, health and well-being.

What Green and Ming had experienced is a typical example of bullying based on physical appearance and gender stereotype. What made the difference was the attitude of a teacher. As a figure of authority, teachers play a major role in preventing bullying and supporting respectful relationships between students.

While the names of the people involved have been changed to protect their identities, these types of experiences are very real. Jing shares her perspective and advice with other teachers. First, they should learn to be gender sensitive and vigilant to situations when students are not conforming to gender stereotypes and are vulnerable to exclusion and bullying. Teachers need to provide support and care as necessary.

Second, teachers need to give a second thought to their first reaction. Blaming the victim may seem like the easiest thing to do, just as Green’s teacher advised her to change how she looked – and who she was. Other teachers might have thought that Ming should try to be more “manly”, but that misses the point that every student should be respected and protected.

Jing also thinks it is important to use communication skills in mediating student relationships and supporting victims. Criticizing and blaming the perpetrators may just intensify conflicts. By handling each case with care and understanding, a teacher can help create a respectful, safe environment, which then in turn nurtures every student.