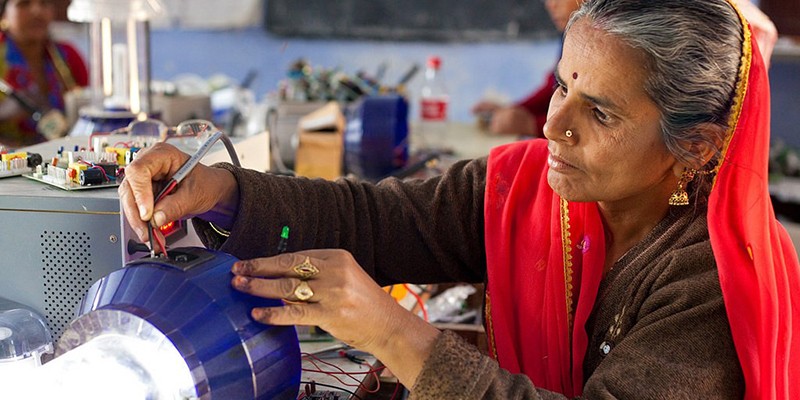 When she was 12 years old, Devki met the queen of Sweden. Impressed by the girl’s sense of self-possession, the monarch asked her, how can you be so confident? “Well,” Devki replied, “I’m the prime minister.”

And indeed she was – prime minister of the Children’s Parliament for the schools of India’s Barefoot College.

It is precisely that level of confidence that Barefoot College has sought to cultivate in its 45 years of operations, having provided education to 75,000 children over the years. Of those, nearly 65 percent have been girls.

In the context of girls’ STEM education, confidence is a vital resource, in a context when one of the most regressive forces is socialization insinuating that girls aren’t good enough, do not have natural aptitude or simply can’t excel. We know those ideas are patently false, but that knowledge is only valuable to the degree that each girl – and everyone else – believes.

Barefoot College translates good intentions into tangible realities and perhaps the core lesson of their work is that empowerment begins at a local level. The college’s STEM curricula arose from the needs of communities, including hands-on skills in crafts, construction, and others, which was eventually complemented by new digital and communications technology phased in based on local needs.

That element of practicality – including empowering women and girls in some communities that are resistant to change – runs throughout the programmes. “I think personally that when a person sets up a livelihood for themselves, the power rests there and empowerment flows from the fact that she is financially independent. This works in the Indian context,” said Shuvajit Payne, Head of Education Initiatives at Barefoot College, India. “The first bit of conflict would be there, but once that happens, the rest of the cycle moves by itself. So a good idea is to start slowly with a little bit of livelihood earning, and then gradually that power accumulates.”

Such a grassroots approach, which is rapidly becoming a national model, is necessarily engaged with the realities of daily life. One of those needs in areas of India that have never been connected to the grid is clearly power. And so, in addition to working as an education institution, Barefoot College has also become a pioneer in training women to be solar engineers.

This aspect demonstrates the engagement of the institution across society. Starting in creches where children’s basic nutritional needs and early intellectual engagement are fostered, to digital night schools specifically designed to cater for girls who have work or family duties during the day, through to women who have followed their vocations to become role models themselves, women at every age are being affected.

And then there are the “solar mamas”, women, including grandmothers, who are being trained as solar engineers, bringing vital skills back to their communities, where those skills stay because of the women’s long-term investment. Barefoot College trained 1053 women from 83 countries in Asia-Pacific, Africa and Latin America, under the solar mamas programme, who have electrified and are maintaining 50,000 houses in 1,150 villages.

While gender-equal education conversations often begin with concerns about girls as they first begin their studies, which is of course crucial for long-term change, Payne identified the “solar mamas” programme as a particular area of “disruption” in communities, as newly empowered women encounter pushback.

In turn, these women have to be equipped with more than just technical skills. “We can prepare for that by training these people with the necessary awareness that - these are my rights and I should be fighting for them. And two, are the negotiations, which means a bit of conflict management,” Payne said. “The disruption that happens is the objective of our programme after all … Whenever we are pushing ourselves towards a new gender normal, it is going to precipitate changes in society that will not be favourable to a particular group, so there will be certain backfiring." To enable these women to flip the disruption to positive change, Barefoot College also conducts comprehensive leadership training.

Since its founding in 1972 by prominent social activist and educator Bunker Roy, Barefoot College has educated tens of thousands of girls and boys and transformed entire communities. Still, Payne stresses it remains a work in progress, evolving at every stage and now looking to replicate past successes in new contexts.

“We are looking at very interesting collaborations with government and other organizations, such that we can talk about a model which can independently, in other off-grid remote places, create digital schools with the very localized content that can push the boundaries of gender and can create a new dialogue,” Payne said.

Inclusion and Gender Equality in Education
Girls' Education in STEM