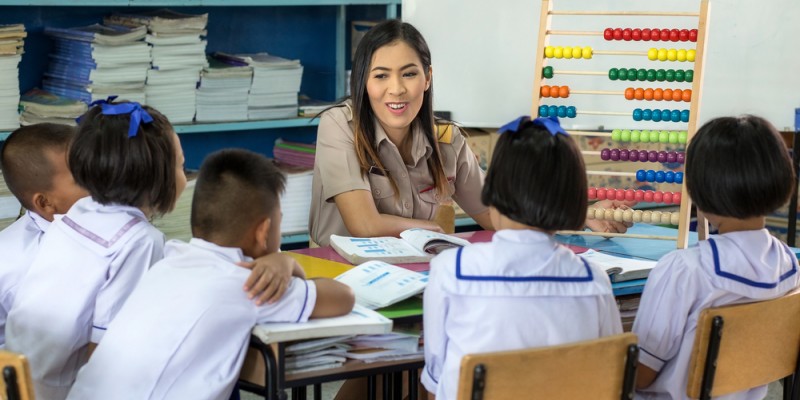 UNESCO’s 2017/8 Global Education Monitoring (GEM) Report highlights the responsibility of governments to provide universal quality education and stresses that accountability is indispensable in achieving this goal. The Report, released today, warns that disproportionate blame on any one actor for systemic educational problems can have serious negative side effects, widening inequality and damaging learning. (Click here for findings on Thailand from Report)

“Education is a shared responsibility between us all– governments, schools, teachers, parents and private actors,” said UNESCO Director-General Irina Bokova. “Accountability for these responsibilities defines the way teachers teach, students learn, and governments act. It must be designed with care and with the principles of equity, inclusion and quality in mind.”

Accountability in education: meeting our commitments, the second in the GEM Report series, which monitors progress towards the internationally agreed Sustainable Development Goal for Education (SDG4), looks at the different ways people and institutions can be held accountable for reaching that goal, including regulations, testing, monitoring, audits, media scrutiny, and grass-roots movements.

The Report demonstrates that blaming teachers for poor test scores and absenteeism is often both unjust and unconstructive. It shows, for example, that nearly half of teacher absenteeism in Indonesia in 2013/14 was due to excused time for study for which replacements should have been provided. Similarly, in Senegal, only 12 of the 80 missed school days in 2014 were due to teachers avoiding their responsibilities. People cannot be held accountable for outcomes that depend on the actions of others.

“Using student test scores to sanction teachers and schools makes it more likely they will adjust their behaviour to protect themselves, which may mean leaving the weakest learners behind,” explains Manos Antoninis, Director of the GEM Report. “Accountability must start with governments. If a government is too quick to apportion blame to others, it is deflecting attention away from its own responsibility for creating a strong, supportive education system.”

Whereas transparency would help identify problems, only one in six governments publish annual education monitoring reports. Strong independent bodies such as ombudsmen, parliaments and audit institutions are also needed to hold governments to account for education. Lack of accountability opens the door to corruption. In the European Union in 2009-2014, 38% of education and training tenders only had one bidder, compared to 16% of tenders in the construction sector, indicating that the risk of corruption is higher in education than in the building industry.

Setting and enforcing regulations ranging from contract tendering to teacher qualifications are also crucial, argues the Report. Fewer than half of low and middle-income countries had standards for early childhood education and just a handful had mechanisms to monitor compliance. There are no regulations on class sizes in almost half of countries.

Government regulations are often too slow to keep up with the fast growth of private schools and universities. In Lagos, Nigeria, only 26% of private schools in 2010/2011 had been approved by the State Ministry of Education. In countries with weak accreditation processes, thousands of students graduate with unrecognized degrees. In Kenya and Uganda, private schools were operating without qualified teachers and with inadequate infrastructure before regulations were put in place and courts shut them down.

Where formal mechanisms fail, citizens play a vital role in holding governments to account for meeting their right to education. In Colombia, a citizens’ campaign successfully challenged the government in court leading to the establishment of free education. In the United States, parents and media successfully lobbied for the removal of climate change denial from textbooks, and students in South Africa were able to halt university tuition hikes.

The Report emphasizes the importance of accountability in addressing gaps and inequalities. Globally, fewer than 20% of countries legally guarantee 12 years of free and compulsory education. There are 264 million children and youth out of school and 100 million young people currently unable to read.

The Report cites an accountability vacuum with donors not delivering on their aid commitments for those in need. The share of aid to education has fallen for six years in a row. At the same time, donors increasingly demand that in exchange for aid, countries achieve results that sometimes divert energy away from systemic improvements in the education system.

No approach to accountability will be successful without a strong enabling environment that provides actors with adequate resources, capacity, motivation and information to fulfil their responsibilities. The Report calls on governments to:

1.    Design accountability mechanisms for schools and teachers that is supportive and avoid punitive mechanisms, especially those based on narrow performance measures.
2.    Allow for democratic participation, respect media freedom to scrutinize education and set up independent institutions to handle complaints.
3.    Develop credible and efficient regulations with associated sanctions for all education providers, public and private, that ensure non-discrimination and the quality of education.
4.    Make the right to education justiciable, which is not the case in 45% of countries.

The Global Education Monitoring Report (GEM Report) is developed by an independent team and published by UNESCO. It has the official mandate of monitoring progress in meeting the Sustainable Development Goals for education.
World Education Blog / Educación Mundial Blog