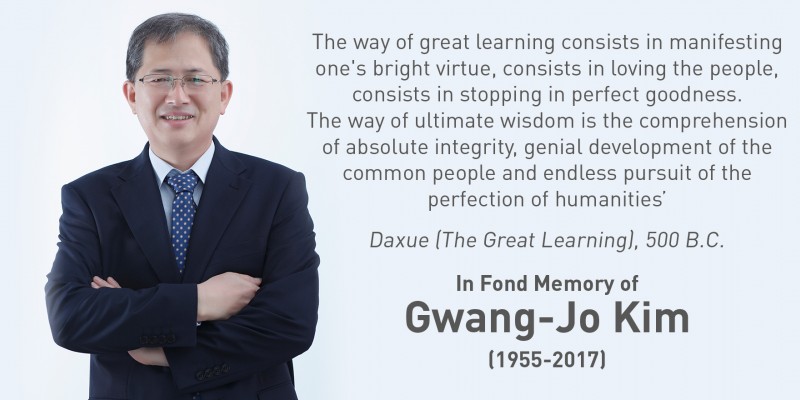 A passionate advocate for education, an ambassador for peace, a beloved leader, a humble, warm-hearted person with talents ranging from classical guitar to hand-crafting kites – Dr Kim leaves a singular legacy in Asia-Pacific development and lasting smiles in the memories of all who knew him.

Dr Kim’s passing on 11 August came while he was on the verge of retirement following a distinguished career championing the rights of learners and promoting peace both as a public servant in his home country of the Republic of Korea and with the World Bank and UNESCO.

Whether in a ministerial forum in front of hundreds of high-level delegates, or in a one-on-one conversation, Dr Kim’s passion for education was palpable.

“[Education] empowers individuals to shape a better future for all,” he told the website Ideapod in 2013. “If you want to bring about peace you have to plant the seeds of peace in the minds of men and women, to borrow part of the UNESCO preamble, through education. If you want to preserve world heritage, tangible and intangible, you have to educate people about the importance of heritage of all kinds so that they can pass this on to future generations.”

His galvanizing energy for the work helped him guide UNESCO Bangkok through some of the most challenging periods in its history, including an organization-wide financial crisis that struck only two years into his term.

Dr Kim’s passion for education inspired and united because it was genuine – he knew education has the potential to transform lives because it had been the guiding force in his own.

FROM VILLAGE TO IVY LEAGUE 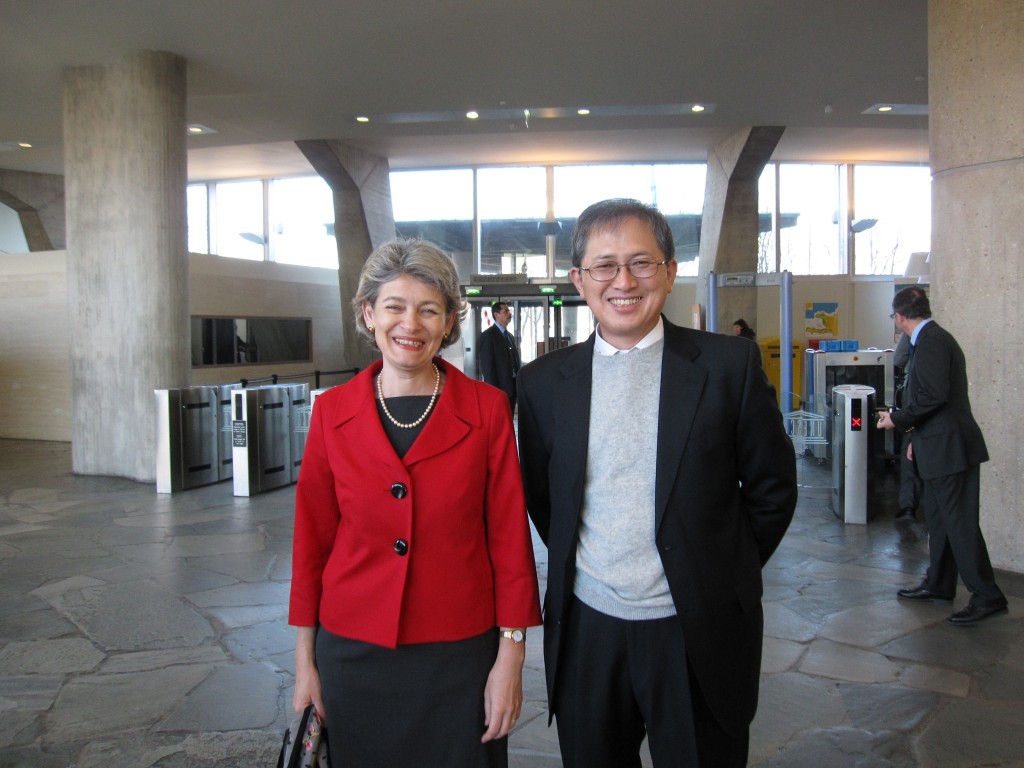 Dr Kim was born on 24 August, 1955 in Gyeongju, Republic of Korea, a UNESCO World Heritage Site in the southeastern part of the Korean peninsula.

He recalled in an interview published shortly after he became UNESCO Bangkok Director in 2009 that the annual per capita income in Gyeongju then was less than USD$100. His father was a school teacher who would ultimately inspire him to choose a career in education, but his immediate prospect in rural early 1960s Korea was to become a farmer, just as his grandfather – and 10 generations before him – had been.

“I didn’t want to plant rice for the rest of my life, so the best way for me to escape from the rural setting was to get a better education, which I did,” he said. “Education gave me an opportunity to find my place in a broader world.”

For Dr Kim, the portal into this new world was his village schoolhouse, a barebones wooden structure situated amid rice fields, packed with 70 students to a class.

“Our resources were limited but our imaginations were not,” Dr Kim recalled in a column he wrote for an upcoming issue of APCEIU’s Sangsaeng Magazine reflecting on his career ahead of his planned retirement this year. “I indulged a sense of wonder – a dragonfly or some exotic insect would capture my imagination and I would always be in a hurry to learn more.”

That determination saw him through his studies at one of Korea’s most prestigious universities, Korea University, College of Law. After graduating in 1978 with majors in civil law and public administration, Dr Kim sat for Korea’s State Higher Civil Service Commission exam. “I wanted to work in a sector that would better the lives of the people,” he recalled. “I was inspired by my father to work in education. I started my career as an officer in Seoul Metropolitan City and quickly moved to the Ministry of Education.”

While at the ministry, he received a government scholarship to study at Harvard University.

In a remembrance in the Huffington Post, his long-time friend and fellow Harvard student from that time, Dr Fernando Reimers, recalled how Dr Kim, then with a wife and young son, sleeping little and working hard, maintained his optimism and focus on the greater goal.

“Gwang-Jo’s hopeful spirit and humor lifted me up on more than one occasion from the pressing burden of having to write many research papers in a language that was very much foreign to us then, during the short days of winter, with little money in our pockets,” writes Dr Reimers, now a Ford Foundation Professor of the Practice of International Education at the Harvard Graduate School of Education. “I learned a great deal from his work ethic, his extraordinary determination and focus on his studies, and from his intellect.”

Dr Kim returned to Korea and served his country in several education-related posts. In the 2009 interview, he listed his role in advising then President Young Sam Kim during the planning of the Korea’s 5.31 Education Reform Proposal” as one of his proudest accomplishments in public service. A news release from the Korean Ministry of Education notes that Dr Kim “played a particularly important role” in the planning of the proposal, “which enabled a critical shift from the conventional ‘supplier-centered’ perspective to a “customer-centered” approach in education.” The Ministry also credits him “for his pioneering works on educational innovation including the ‘Teacher Policy Reform (1998)’ and ‘Five-year National Human Resources Development Plan (2004),’ which became turning points in the modern history of Korean education.”

Our late director’s first foray into international development was as a Senior Education Specialist with the World Bank in Washington, working on education-related projects involving China, Colombia, Jamaica, Barbados, Eritrea, Mauritius and Jordan.

He would continue his service to his country as the Deputy Minister of Education from 2005-2008 where he led policy developments in higher education, technical and vocational education, lifelong learning and human resources development.

The natural charisma and flair for organizing diverse stakeholders around a common goal that would come to typify his term as UNESCO Bangkok Director became apparent during this period. He coordinated cross-ministerial human resources development policy initiatives and launched the Global Human Resources Forum in Seoul in November 2006.

“Are you happy?” Dr Kim asked many audiences this question. For him, happiness and education were inextricably linked. Recalling his early years of schooling in a Bangkok Post opinion article on UNESCO Bangkok’s Happy Schools project, he wrote, “Looking back the only word that seems to adequately capture that period for me is, simply: happiness.”

He believed that all learners deserved that same experience – that a child’s enjoyment of learning is precious and at risk of being crushed under the weight of stress-filled, exam heavy education. The ongoing Happy Schools Project, initiated under Dr Kim’s leadership, encourages Asia-Pacific policy-makers to move away from such counterproductive approaches to focus more on learners’ holistic development and well-being.

And happiness began at “home” with Dr Kim. His presence in the office and his interactions with colleagues and stakeholders from throughout the region brought smiles among diverse groups and made him a figure around whom all were pleased to rally. He would present colleagues and partners alike with beautiful, hand-crafted decorative kites on special occasions and would celebrate the spirit of solidarity he championed with his skill on the classical guitar.

He lived a life and set an example that was the antithesis of cynicism. His term spanned the end of the Education for All era and the beginning of the pursuit of the even more ambitious 2030 Agenda for Sustainable Development. To the end, he remained committed to this vision of a more sustainable, peaceful and equitable world.

“Sceptics or cynics cannot solve [our] great challenges,” he told Ideapod. “Climate change, nuclear war, global terrorism, financial crises will continue to threaten our lives and the lives of generations yet to come, unless we develop the capacity to think differently and to dream of things as they never were.”

Reflecting on his friend’s career, Dr Reimers wrote of how his tremendous accomplishments were important to Dr Kim “only because they provided him a platform from which to serve others, especially children.” And at the heart of that service was always education.

“As one who has worked in the area of education policy making and planning for almost three decades, I continue to dream of a world where every child, no matter where they were born and no matter what their circumstances, is able to receive a quality education,” he told Ideapod. “To create a better future, youth must behave as though their every action will affect a thousand people for generations and generations to come because increasingly, it will.”

UNESCO Bangkok mourns our beloved Director’s passing, and remains committed to carrying forward his precious legacy of finding strength in diversity and building peace through education.