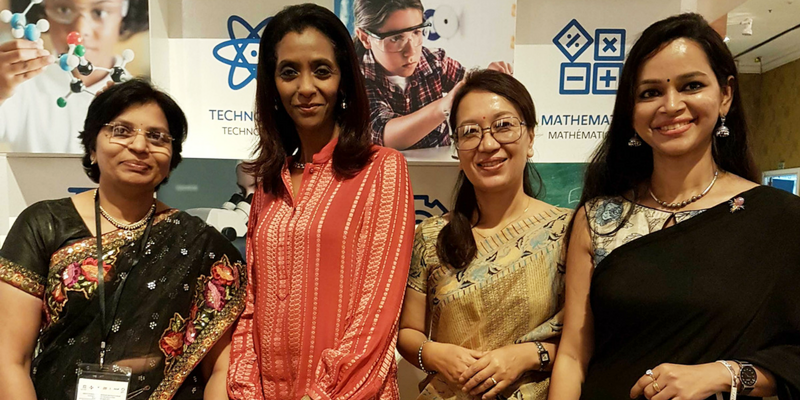 For BBC presenter Zeinab Badawi, the debate around the media’s role in limiting girls’ educational and work choices is a personal one with roots going back to her great-grandfather’s pioneering efforts to break gender barriers in education in Sudan generations ago.

It’s a proud legacy and one that Ms Badawi carries forward both as one of the most recognizable faces in a long male-dominated field and, most recently, in a key role guiding high-level discussions at UNESCO’s recent International Symposium and Policy Forum, “Cracking the Code: Girls’ Education in Science, Technology, Mathematics and Engineering (STEM)”.

The event, held from 28-30 August in Bangkok, brought together more than 340 policy-makers, educators, students and activists to address persistent gender gaps in STEM education and careers. Ms Badawi, the presenter of BBC’s Global Questions and Hard Talk and a prominent voice in development, brought her talents to moderate the high-level policy forum with ministers of education and other senior government officials from more than fifteen countries around the globe.

Ms Badawi shared her perspective on the role of media in the socialization process, influencing opinions, interests and behaviors. “I think that the media in all its manifestations now does have a responsibility in terms of perpetuating gender stereotypes that can in a very significant subconscious or subtle way suggest to young women and girls that they should not pursue or study in STEM subjects,” she says.

The veteran journalist gave the example of how men typically end up being the ones interviewed when it comes to a report on a groundbreaking scientific or technological advancement.

“That partly is a reflection of the fact that these areas are dominated by men and you will end up interviewing men,” she said. “I think it is incumbent on broadcasters and journalists to go that extra mile to find the female voice who may be the physicist, the chemist, the astrophysicist or whatever.”

And it’s not just in news broadcasts that such insidious stereotypes sink into psyches, she said.

“Also, in dramas you often see these stereotypes are perpetuated. Where it’s possible, storytellers might try to include an engineer who is a woman in the story line,” Ms Badawi said. “Not just doctors – I think we are used to women doctors because that’s part of the altruistic side of the sciences as it were – but I think we need to break the barriers in terms of physicists, chemists, women peering into microscopes.

Ms Badawi emphasized that STEM-related gender bias in the media is not only due to overt sexism but also subconscious bias, and linked to challenges in securing and retaining female participation in STEM studies in countries around the world.

“This is an issue that affects less developed countries as well as more advanced, better developed countries, where you find that there aren’t enough women in the STEM subjects, particularly at university level and in STEM careers,” she said. “The picture is a bit mixed … but on the whole I think that there could be a big drive globally to raise awareness that in whatever way we can, we should try to promote girls in STEM subjects and also STEM careers. The media can do that in myriad ways.”

She noted, as reinforced in the UNESCO report launched at the event, that the situation is “getting better” and that role models and mentors were an important factor in proving to young girls and women that barriers can and are being broken.

Of course, Ms Badawi is one such role model, transcending career boundaries. Participants thanked her for her own work in “cracking the code” when it comes to representation in media. One participant, for example, approached Ms Badawi to thank her for simply covering African issues on the international stage, saying how much it meant to him. The brief exchange offered a stark reminder of wider biases in mainstream media.

Ms Badawi fully immersed herself in the spirit of the symposium – listening to delegates’ stories and, of course, graciously obliging countless selfie requests. During the parade of selfies, Ms Badawi stopped and dashed across the room seeking one of her own with Professor Pamela McCauley, Director of University of Central Florida Ergonomics Laboratory, a noted engineering academic and author of a definitive textbook in the field. Even role models have role models it seems.

Girls' Education in STEM
Inclusion and Gender Equality in Education