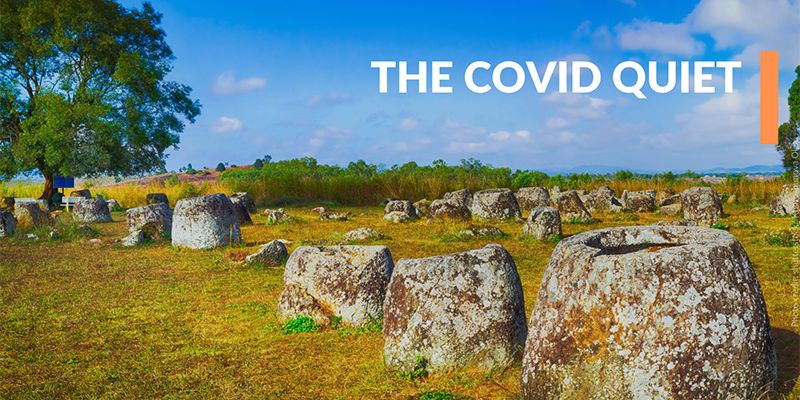 Most sites see a dramatic change after being put on the World Heritage List. Visitor numbers shoot up, investors both domestic and international flock to the site, and there is a flurry of media interest and community activity. Yet, one year after the listing of the Plain of Jars in Lao PDR in July 2019, things have been quiet, largely because of the impacts of COVID-19.

While over-enthusiastic development has been the biggest headache for many World Heritage sites, an absolute dearth of footfalls and economic activity can be equally worrying. Although conservation is the primary purpose for listing, many countries seek recognition with a more pragmatic view of increasing the international profile and earning income for communities. The pandemic is affecting the welfare of people and organizations in the area, and also efforts to safeguard the site – a situation that is not just limited to Plain of Jars but pertains to World Heritage Sites worldwide.

Prior to listing last year, Lao authorities in cooperation with UNESCO had been preparing the nomination dossier and management plan for 20 years. Local leaders had pinned their hopes on the new status lifting the fortunes of one of the country’s poorest provinces, which was one of the heaviest bombed areas in the 1960s and 1970s and still has a deadly legacy of unexploded ordnance. With ancient stone jars scattered on hill slopes and ridges throughout the Xieng Khuang Plateau, nearby villages play an important role in the protection strategy and stand to benefit from increased visibility.

The hoped-for World Heritage effect has only had limited impact so far, however, and life mostly goes on as usual for residents who eke out subsistence livelihoods in the rural areas near the ancient archaeological sites. “Villagers are still living as normal,” said Thongsavanh Khammanichanh, Deputy Director of Plain of Jars World Heritage Office. “They do farming and also some local business.”

Instead of the expected boom, tourism has been one of the hardest-hit sectors. As part of a nationwide shutdown, Plain of Jars sites were closed from March to May, with no visitors or outside activities allowed. Since then, the sites have resumed full operations, but visitor numbers are down 70 per cent compared with last year since the country is still closed to outside visitors.

“A lot of local tourism-related businesses have simply closed for now,” tourism expert Tara Gujadhur said. “They can't pay salaries or overheads for such low visitation that is primarily over the weekends. This is a problematic cycle of travellers not wanting to visit if they feel that the tourism services won't be operating as usual, but then businesses not opening because of low visitation.”

As part of the short-term recovery, authorities are looking to domestic visitors to fill in the gaps. “We now promote more domestic visits mainly through the social media and some advertisement on TV and radio,” Mr Thongsavanh said. “However, many main events have not yet been allowed such as festivals and other celebrations.” Even the large celebration to commemorate World Heritage status planned for earlier this year has been put on hold indefinitely.

“The challenge is keeping domestic travellers for a longer stay in the area, and visiting more than just Jar Site 1,” Ms Gujadhur said. “If we can entice them, and in the future international tourists, to go to the lesser-known sites, there will be more opportunities for villages around the sites to earn money through selling souvenirs, opening small restaurants, and provide services and activities. And these sites are highly interesting, with stunning nature and views.”

As part of the Laos-New Zealand Tourism Support Program, a new tourism development plan encourages visitors to visit multiple sites through a heritage passport scheme. The unique characteristics of each of the different sites can also be promoted to niche markets. More active visitors, for instance, might be interested in hiking to some of the more rugged areas, while improved trails, visitor facilities and carefully designed amenities could diversify visitor activities at various locations.

The downtime is providing opportunities to improve the presentation and management of the sites. Recent visitors have been greeted by new signs explaining various World Heritage components that have been implemented with New Zealand’s support. The signs complement earlier investments overhauling the Xieng Khouang provincial museum and upgrading facilities at the marquee Site 1 including a visitor centre, cafe, handicraft shops, parking and toilets.

This new visitor infrastructure is also helping to disseminate research findings from an ongoing Lao-Australian research project that is yielding insights into the once enigmatic site. A variety of human burials have been uncovered near the jars, along with a wide range of grave goods and other traces of funerary practices.

To improve the long-term management of the site, one top priority is “putting in place a better revenue management system, [with] a network of sites where the revenue stems primarily from just a few sites”, New Zealand project expert Ross Corbett said. “That happens in other heritage sites, destinations and in business as well.” Ensuring that tourism revenue is distributed in an inclusive manner will be key to funding management work as well as directly benefit local communities. Creating alternative sources of future revenue aside from tourism would also buffer the local economy from protracted pandemic fallout or other future disruptions.

“Despite the difficulties during COVID-19 situation, many steps forward have been [taken],” Viengkeo Souksavatdy, Deputy Director of the National Heritage Department, said. At the national level, the ninth session of the inter-ministerial National Committee for World Heritage was convened in Vientiane on August 20, 2020 to review various concerning World Heritage matters, reflecting a sense of urgency in protecting sites amid the pandemic.

The newly set up Plain of Jars World Heritage Management Office is also driving forward initiatives to better manage the site. The Office will be the focal point for coordination both at the national and local levels, notably Village Heritage Teams who are at the frontline monitoring the heritage distributed widely across the plateau. Local consultations have been carried out both for the Tourism Management Plan as well as the World Heritage Management Plan, which is being funded by the French Ministry of Culture.

With the pandemic highlighting the fallout from unanticipated emergencies, heritage officials are now working to identify disaster risks and plan mitigation measures under a project supported by UNESCO’s Heritage Emergency Fund. Field surveys have been undertaken using a mobile app developed under the project to collect and visualize data. Training in conjunction with the International Centre for the Study of the Preservation and Restoration of Cultural Property and the Southeast Asian Ministers of Education Organization Project in Archaeology and Fine Arts has involved first responders such as police and emergency services in the province, along with village representatives.

Beyond the Plain of Jars, the resilience of the heritage sector is now being flagged in policies and mechanisms for disaster risk management. This could be the silver lining with long-term consequences stemming from the current crisis.

* This article was first published in the South China Morning Post