Close to home: Taking action for sustainability through community-based education in Karnataka 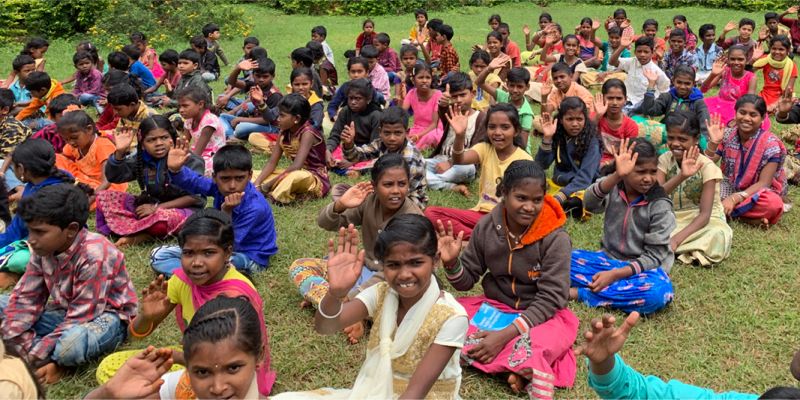 Close to home: Taking action for sustainability through community-based education in Karnataka

“Where there are no tribals, there is no forest,” says Madegowda Jadeyegowda, an assistant professor at the College of Forestry, Ponnampet in the southern Indian state of Karnataka. Jadeyegowda is the president of VGKK*, a local not-for-profit organization for the sustainable development of tribal people. Perhaps most importantly, he himself is also a member of the Soliga tribe, an ethnic group that inhabits the ranges of Biligiriranga Hills, commonly known as BR Hills, in south Karnataka.

While it is true that the Soliga people’s main source of income is the harvesting and selling of forest products such as honey, bamboo, and other plants and fruits, the tribe also maintains traditional knowledge that protects the forest upon which they sustain their livelihoods. Their conservatory ethos emphasizes a simple life spent in harmony with nature, he explained.

However, like in many other areas of the world today, the forests of Karnataka have long faced depletion and exploitation due to construction, mining and agriculture. In order to enhance the sustainability of his tribe’s livelihood practices, Jadeyegowda is part of a project bringing Education for Sustainable Development (ESD) to the Soliga community.

This project, entitled ‘Promoting Community-based ESD’, was initiated in 2018 by UNESCO Bangkok with the financial support of the Government of Japan. The aim of the project is to develop the capacities of community and non-formal educators to guide learners through a reflective process of taking action for sustainability. To do so, a conceptual framework and learning modules for community-based training have been developed. The framework is being piloted in five countries in the region: India, Japan, Lao PDR, Mongolia and Philippines.

The pilot in India is led by the Centre for Environment Education (CEE) South Regional Office in collaboration with the local Colleges of Forestry, Ponnapet and Sirsi, together with support from the Forest Department. In June 2019, CEE and its partners organized a Training of Trainers (ToT) workshop in Sirsi. Three community educators from the Soliga tribe joined representatives from several other tribal communities including Gowdas, Havyaka and Marate to participate in the ToT.

The project framework consists of three parts: Reflect, Share, and Act. In the Reflect stage, learners engage in critical self-reflection to unwind and rewind their practices through an ESD lens and give meanings to the concept of “sustainable development” in their own community contexts. Then, Share guides the learners to be trainers themselves in order to share their reflections and understandings with others and engage them in ESD. Finally, Act helps learners put their reflections on contextualized sustainability into action.

After going through the entire Reflect-Share-Act model themselves, the trainers were to share the process with their respective communities so that the local people can take their own ESD action. For the Soliga tribe, the framework was used to change the unsustainable honey harvesting practices in the community.

Formerly, the honey collectors used fire to paralyze all of the bees in the hive in order to harvest the honey. Now, they use a smoking device to temporarily drive the bees away from the hive while the honey is partially harvested. This way, the bees are able to return to their habitat and some of their honey still remains. Not only does this method yield more produce, the honey harvested is also more hygienic, of better quality, and can fetch a higher market price.

However, the journey to sustainability isn’t smooth. Initially, the Soliga community was apprehensive about these new concepts and practices that were foreign to them. The pilot team stated that having the tribal people share information with the community in their own language helped tremendously in shifting their mindsets. When sustainability is put into a context that the community understands and connects with, the concepts and practices can be learned and adopted more effectively.

In addition to adapting the language, the ESD concepts were also communicated through other types of media that spoke to the Soligas. Posters, interactive flip charts and other learning materials were developed by the community, for the community. Folk songs, skits and games were also used to help the local people visualize and develop their thoughts and ideas.

The ‘Promoting Community-based ESD’ project reinforces the notion that formal education alone is not enough. Non-formal and informal education that takes place in communities provides opportunities for everyone to learn and work together to take collective action for sustainability. This is particularly in line with UNESCO’s new international framework entitled ‘Education for Sustainable Development: Towards achieving the SDGs (ESD for 2030)’, which emphasizes the importance of community as a platform for transformative action.

A prime example of this is in BR Hills, where the whole Soliga community is able to access both formal and non-formal education provided by VGKK, the tribal development organization that Jadeyegowda leads. Local children attend the VGKK school that provides preschool to secondary-level education. Meanwhile, on the same premises, adults can learn skills such as honey processing and weaving at the vocational training centre.

The ESD for 2030 framework and the Reflect-Share-Act model for community-based ESD were recently shared at a special session during the International Conference on Sustainability Education on 9-10 September 2019 in New Delhi. CEE and other country representatives described their experiences and lessons learned so far from implementing the pilot projects in India, Japan and Philippines.

During the session, the project framework was shared with a general public audience in the form of an interactive workshop. Participants were taken through the process to reflect on and enhance their own practices in their communities. The sharing of the model was met with particularly positive feedback, demonstrating the framework’s potential to be applied on a broader scale.

Jadeyegowda agrees that the Reflect-Share-Act process can be beneficial for many. His own community-based education story began where VGKK originated – in a small hut that was transformed into a non-formal school with only six students. Because of this, his desire to spread ESD is literally and figuratively close to home.

“It is so helpful for me to learn about this sustainability method,” he said. He is looking to apply the framework at the BR Hills school and also to train Forest Department officials in the hopes that more sustainable local policies can be established in Karnataka.

Through UNESCO Bangkok’s project, communities are able to come together to empower themselves through community-based and non-formal education. Once they are able to transform their understandings and practices for sustainability, tribal communities like the Soligas and the areas they inhabit will thrive, contributing towards a sustainable future for our world.