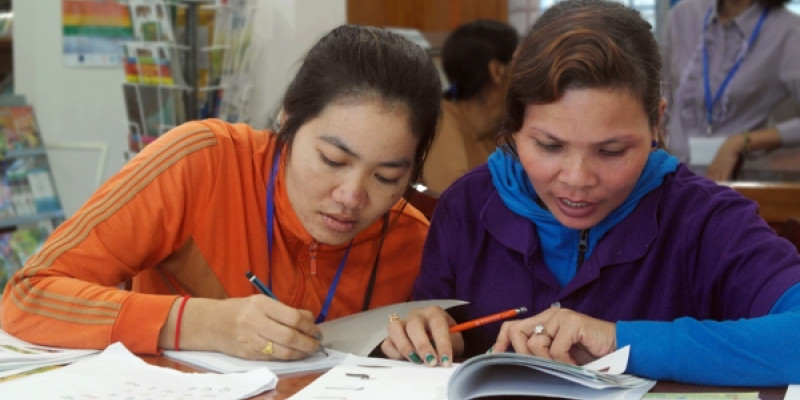 Burdened by family, social and economic obligations, many women working in factories in Cambodia have had to either forgo basic education opportunities or never had a chance to enroll in the first place. The 2013 report by Ministry of Planning on Women and Migration in Cambodia showed that 85 per cent of the 605,000 workers in garment and footwear factories were women, of whom 14 per cent were illiterate and 29 per cent demonstrated low levels of literacy.

Targeting these workers, Cambodia’s Minister of Education Youth and Sport (MoEYS), with support from UNESCO, developed a special literacy initiative for factories, commonly referred to as the Factory Literacy Programme.  Funded by the UNESCO Malala Fund for Girls’ Right to Education, the programme aims to enable young women and girls working in factories to acquire basic functional literacy skills and empower them to better understand their own fundamental rights. With the involvement of the French NGO Sipar and the Cambodian Women for Peace and Development (CWPD), both of which are setting up library and reading corners in factories, the programme was rolled out in 11 factories in January 2017.

With the literacy classes operating for over a year now, what have we learned? UNESCO visited the learners, teachers and managers to hear about their experiences. The stories each narrated reflected and validated the statement of former UN Secretary-General Kofi Annan: ‘Literacy is a bridge from misery to hope. It is a tool for daily life in modern society.’  In Cambodia’s manufacturing sector, which is often associated with low pay and difficult working conditions, literacy is opening new worlds of opportunities and empowerment.

Ms Chin Sreyleap, a 25-year-old working for the Sabrina Garment factory, recently graduated from the literacy course and seems elated with the progress she has made. ‘I am the warehouse keeper for all the production materials here at this factory, so they expect me to note down the inventory. Before, I was unable to read and write, but after finishing this course I am able to accurately count and record the numbers when they [staff] request materials. Now I feel more confident in dealing with the materials and distributing them,’ she said.

Sharing a similar sentiment is Ms Hem Minea, who is working at Dewhirst Factory. She proudly told us, ‘Previously my group leader would never ask me to do anything. But now that I can read and write, she asks me to do a bit of record-keeping once in a while.’

In addition to the improvements in learners’ working abilities as a result of the literacy classes, many also expressed the joy they felt when they were able to use their newly learned skills outside of the factory in their day-to-day lives. Being able to understand notices in shops, recognize brand names, read contracts and letters before signing them, and help their children with their homework are some of the  activities that the learners said they would have been unable to do if they had not taken the initiative to join the programme. Apart from the development of their literacy skills, the learners also admitted that their general knowledge had improved along with their behaviour, which they credited to the various topics incorporated into their textbooks. 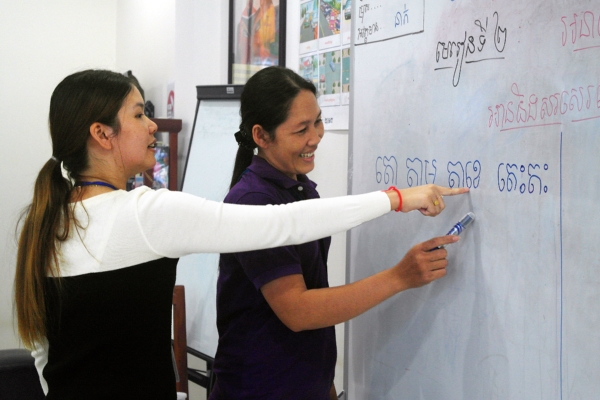 The enthusiasm for the programme was equally shared by teachers and managers at the factories, who have been actively supporting the literacy classes by devoting their time and effort. The programme offers teachers the individual satisfaction of contributing to and giving back to society, while also offering other direct benefits. Ms Seoung Channy, a literacy teacher at Sabrina Garment factory, admitted that teaching the literacy classes had helped her to build her own skills. ‘The more I share, the better I remember how to combine vowels and consonants and how to spell different words,’ she said.

Teachers also spoke of how their students paid more attention to managing their finances and daily habits, including sanitation and health, after studying chapters such as Financial Management and Health & Nutrition. Ms Yin Phalla, a literacy teacher at Dewhirst Factory, pointed out that one of her learners who used to drink water from unwashed public glasses had started carrying her own water bottle after attending the classes.

Mr Veasna, a manager at Sabrina Garment, also informed us of positive changes in the mindsets of the participating workers. ‘Before, it was slightly difficult to engage them in learning. But now, they even share information regarding what they learn with the rest of their coworkers,’ he said. Another benefit of the programme is that it appears to be reducing turnover rates. ‘We usually tell our workers that if you keep working here, then you’ll keep learning here. But if you leave us and join another factory, then you might not get an opportunity to learn there,’ said Mr Sok Udom, a manager in the HR department of Maurea Garment Factory.

Managers extolled numerous benefits for their operations, including better motivation among the learners, improvements in discipline, fewer production errors, a positive impact on productivity and better employer-worker relationships.

By December 2017, a total of 438 students (416 females and 22 males) from 11 factories had completed the programme and been awarded certificates of literacy completion, which is equivalent to grade 4 of formal schooling. In 2018, 14 more factories plan to implement the programme, bringing the total to 25. Recognizing the results, the MoEYS is further encouraging other factories to implement the classes and offering to allocate contract teachers. As part of the initiative, the MoEYS currently provides 24 contract teachers, a number that will grow as more factories implement the literacy classes in the coming months and years.

The shared stories of the people involved compose a vivid picture of how powerful literacy can be in terms of empowering individuals and institutions. The benefits of one-time investments in literacy to an individual, family, society, economy, nation and the world are continuous and lifelong. Together with the MoEYS and other partners, UNESCO in Phnom Penh wishes to appeal to more employers and factories to join efforts in eliminating illiteracy in Cambodia.