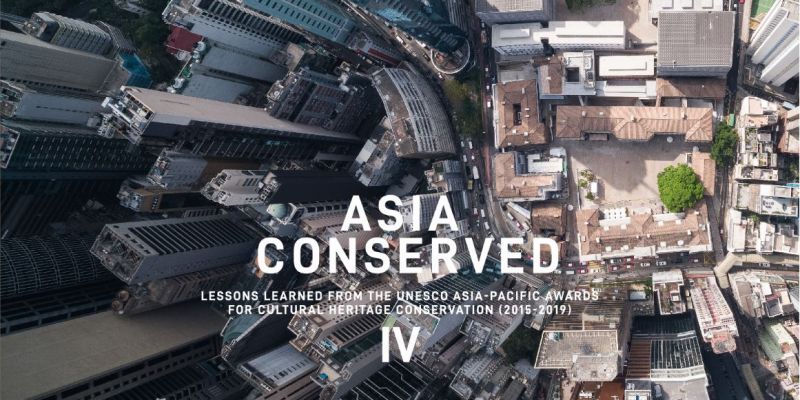 The projects encompass a range of building typologies, from fortified palaces to vernacular residences, ornate houses of worship to utilitarian factories, elegant engineering works to urban districts. From the case studies are derived important lessons that show how strong public-private partnerships and innovative grassroots initiatives can create a powerful platform for the protection of the historic built environment in such diverse places as the ancient cities of Central Asia, the cultural landscapes and historic precincts of South Asia, the port settlements of South-East Asia and the urban centres of East Asia.

Through colour photographs, architectural illustrations and detailed narratives, profiles of the Award-winning projects guide the reader in the approaches taken to resolve challenging technical, economic, social and political issues. Technical briefs, contributed by the conservators themselves, provide in-depth solutions to critical conservation problems. Bridging theory and practice, essays authored by the distinguished jury members provide a cross-cutting analysis of the body of conservation knowledge emerging from the UNESCO Asia-Pacific Heritage Awards programme.

Aimed at a broad audience of conservation architects, heritage professionals, decision-makers, heritage homeowners, scholars, students and the concerned general public, the publication will serve as an invaluable reference for safeguarding the monumental and vernacular heritage of the Asia-Pacific region and contributing to its sustainable future. 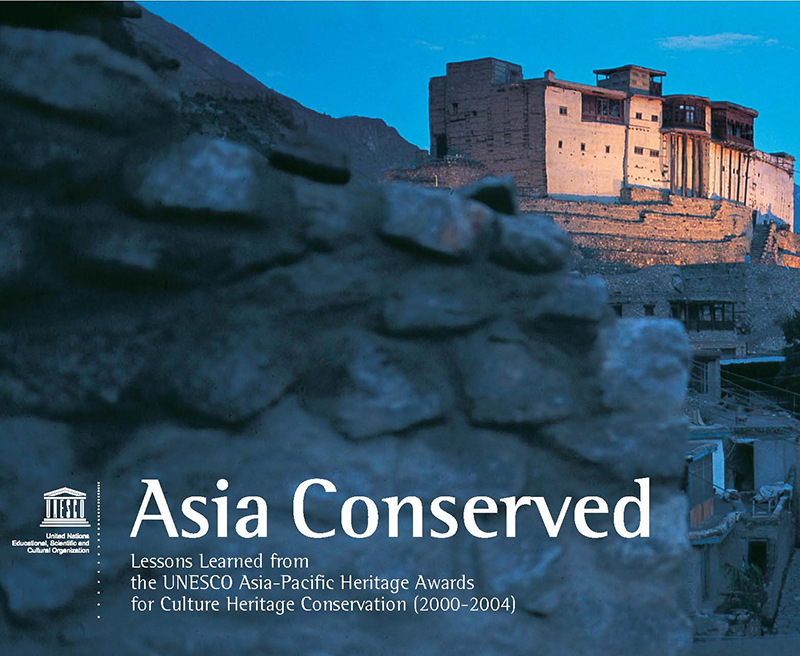 Spanning diverse cultures and building traditions, Asia Conserved: Lessons Learned from the UNESCO Asia-Pacific Heritage Awards for Culture Heritage Conservation 2000-2004 presents a panoramic survey of the wealth of architectural heritage in the region and provides a blueprint for concerted action on the part of private citizens and governments alike in its conservation. 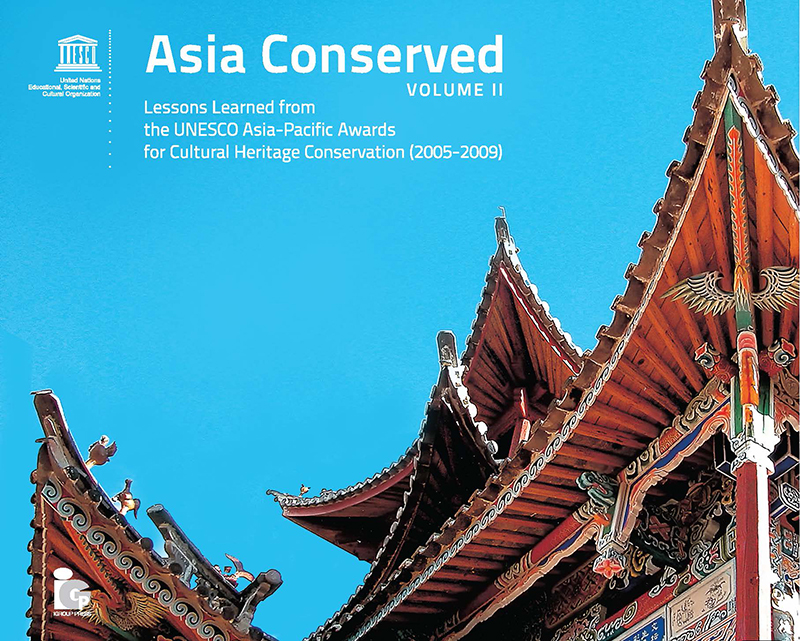 As a sequel to Asia Conserved (Volume I) which spanned from 2000 to 2004, Volume II showcases projects which received the Awards from 2005 to 2009. The featured project winners span a wide range of conservation projects from private residences to palace complexes, from industrial heritage sites to vernacular villages.

The book contains 64 well-documented case studies, over 120 technical drawings and 400 stunning photographs. Technical briefs provide the reader with detailed insights on conservation issues within the region, while the essays, authored by the Awards’ jury members, reflect on the major trends in heritage conservation across Asia and the Pacific.

The Awarded projects documented in the book serve as catalysts and sources of inspiration for private individuals and institutions in conserving cultural heritage throughout the region. 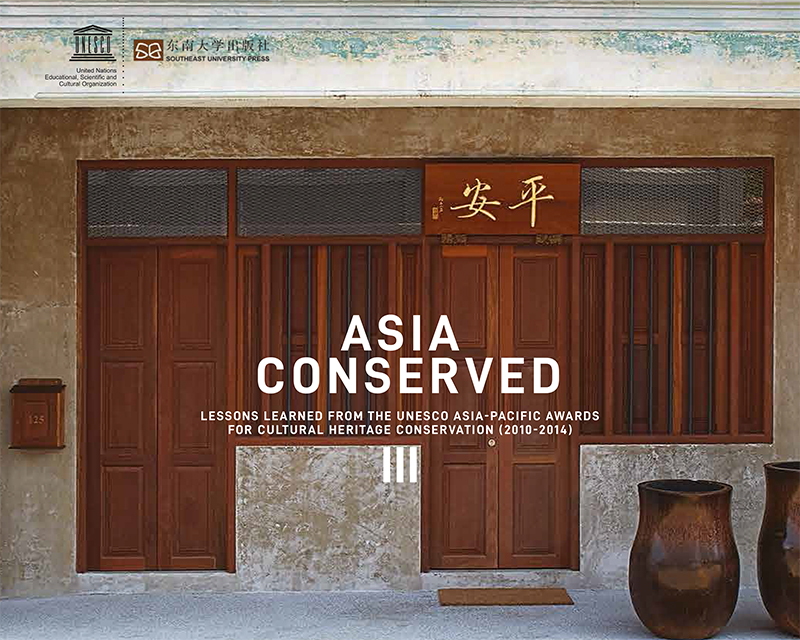 This third volume in the Asia Conserved series offers a complete overview of the projects recognized by UNESCO’s Asia-Pacific Awards for Cultural Heritage Conservation between 2010 and 2014. The awards programme acknowledges excellent achievements by the private sector and by public-private initiatives in conserving and restoring heritage buildings and properties in the Asia-Pacific region.

The publication documents a remarkable collection of conservation initiatives from the region. In addition, the publication presents essays authored by members of the awards jury that draw upon the award-winning projects to illustrate how cultural heritage is linked to sustainability in the five critical dimensions of the 2030 Agenda for Sustainable Development: people, planet, prosperity, peace and partnerships.

To order hardcopy of the publication, place your order with SEU Press by contacting Ms Wei Xiaoping at 9631499@qq.com 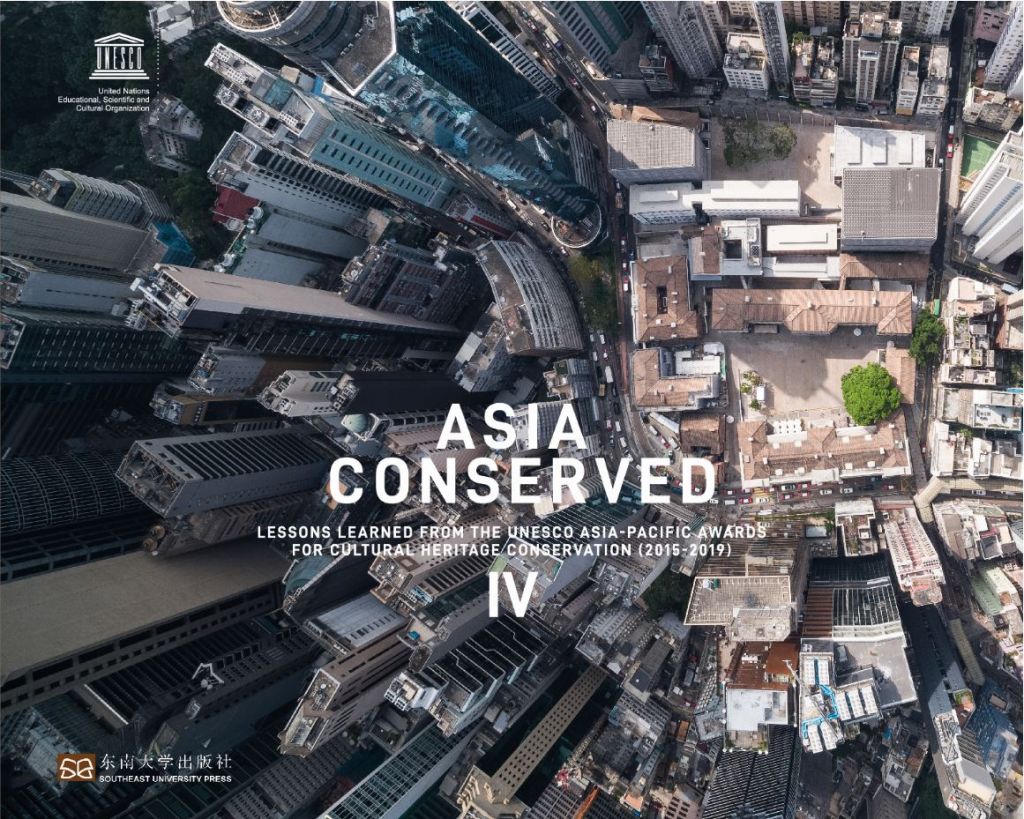 The Asia Conserved Volume IV commemorates the 20th year anniversary of the UNESCO Asia-Pacific Awards for Cultural Heritage Conservation. It provides an overview of the past 20 years of heritage conservation practices in the region through commentaries and reflections contributed by multiple-awards winning individuals and organizations. The volume also discusses a vision towards strengthened heritage practices in the Asia and the Pacific by setting a benchmark for professional competences referring to the newly developed UNESCO Competence Framework for Cultural Heritage Management.

This publication introduces the Award-winning projects from the most recent five years of the UNESCO Asia-Pacific Awards for Cultural Heritage Conservation (2015-2019). Sixty-seven exemplary heritage practices from the region are documented in a case study format accompanied by a careful selection of architectural illustrations and photographs. In addition, a limited number of Technical Briefs are introduced to provide further in-depth information on case-specific topics.

To order hardcopy of the publication, place your order with SEU Press by contacting Ms Wei Xiaoping at 9631499@qq.com